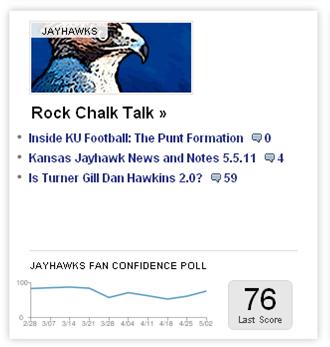 Are Kansas fans more confident after the Spring Game?  That appears to be the case considering the nearly 15 point jump in fan confidence this week.  Since the loss to VCU and the departure of the Morri and Josh Selby, Kansas fan confidence has been in the dumps bottoming out on April 18th.  A steady two week climb shows that Jayhawk fans are starting to get their swagger back, but why?

With nothing on the basketball front to change feelings considerably, it would stand to reason that Spring football has in some way impacted the overall sentiment among the fanbase.  But what could it be?  Offensive line play?  Runningback depth?  QB competition? Grad's take on Dan Hawkins and the punt formation?  Or could it be something completely unrelated like the dominance of Wichita State in baseball?

Something has sparked a renewed confidence in Kansas and the only change in the last week is a 17-6 victory by Blue over White on Saturday afternoon.