Inside KU Football: The Punt Formation

Share All sharing options for: Inside KU Football: The Punt Formation

You know what is frustrating? Watching your team have a punt blocked. You know what is even more frustrating? Watching it happen twice in a three week span. While a lot of things went wrong last season for KU, special teams and punt protection remain one area many fans point out right off the bat. Why? It is an area that can and should be easily correctable. Getting your offense to score 14 more points a game? That can be tough. Not letting a punt get blocked? That should be a quick fix. I think. A whole lot more (and pictures!) after the jump

Before last season, KU had not had a punt blocked since 2006. On top of that, KU usually had one of the better punt units in the Big 12 - Kyle Tucker and Alonzo Rojas could change field position in a hurry, and KU protected the punter with commercial airplane-like safety. The punt game is important and can be a game changer. Just look at our first game (if you can stomach it): North Dakota State's average starting field position was its own 42 yard line. Its own 42! Imagine if KU had routinely pinned them back in their own territory... you think we could have beaten their six points? I do.

So let's break it down like James Brown. Last year, KU decided to employ the new(ish) spread punt formation that features seven guys on the line and a wall of three blockers in front of the punter. Now, call me old fashioned, but I liked the old formation with two gunners outside, a line, safety back and finally the punter. Seeing KU switch from the traditional formation to the new spread out one made me nervous the first time I saw it. My fears were soon realized.

To see what can go wrong, let's just observe what happened when Southern Miss (did you know Bert Favre went there?!?!?!) blocked one of our kicks last year. 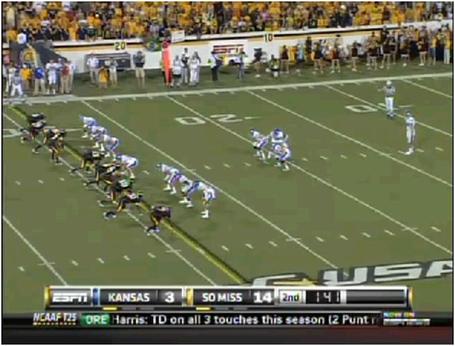 Pre-snap, you can see the formation in all its horrible glory. The biggest fault I have with this formation is the reliance on the back wall. Often a team will rush only a couple guys to set up the return. Then, I can see the advantages of using this formation, it allows for your guys to get down field quicker. But what happens when a team goes for the block? I feel like you are trusting the three guys in front of the punter too much. 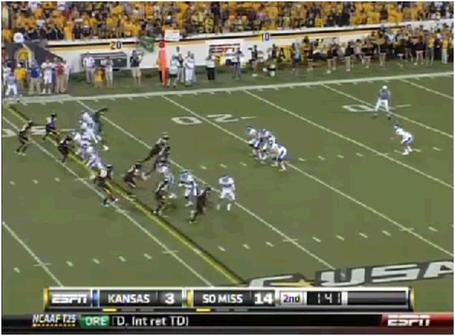 Right after the snap, you can see a few Southern Miss players have already found a clear path towards the punter. Shouldn't be a big deal, since we have the wall to protect. Also, note the snap is absolutely perfect. All Rojas has to do is bend down a little to catch it - it hits him right in stride. So we can't blame the block on a poor snap which delayed the time Rojas had to give it das boot. 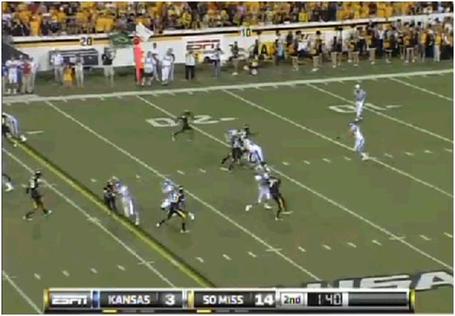 Here is where disaster strikes - two blockers along the back wall pick up one rusher, which leaves a one on one with the other blocker and rusher. As you can see, the defender gets the better of the KU player and gets into position. 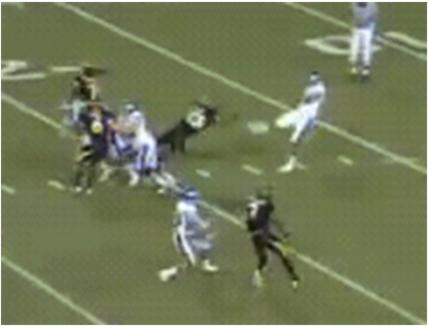 And there it is. A backbreaking play with only 1:36 left in the first half.

What scares me is that as you can see in second frame, only two Southern Miss defenders break through and get in position to make the block. KU has a three on two advantage, yet somehow the kick still gets blocked. What happens if three or four guys get through the line and hit the wall? What happens if there is a poor snap? Like I said, this formation puts a lot of trust in the three guys that make up the back wall, which makes me nervous as hell.

I favor the old, more traditional NFL-style formation because (and this is my opinion):

1) Players are bunched closer together which makes it hard for guys to get through the middle. A stunt can help the lineman, but even if someone does get through, the safety valve back in front of the punter can usually pick them up.

2) The punter can see more without a shield in front of him. This can help him recognize danger faster or make an emergency move. For example, in the past a man had gotten up the middle, and Rojas would run to the outside and execute a rugby style kick. Harder to do with three guys in front of you.

Now, many people will argue that the blocks last year were the result of players missing their assignments and not executing, and many special teams coaches feel the shield formation allows the punt team to achieve better kick coverage. I'm willing to listen to (and encourage) counter viewpoints if anyone likes the shield formation, I just usually adopt a "if it ain't broke don't fix it" mentality with sports. Going from having a block back in 2006 to three last year (including several other close calls) has me spooked. Hopefully the coaches have addressed it - turning around our special teams is a necessary step in our journey back to respectability.