What Does Kansas Have In Blake Jablonski?

Share All sharing options for: What Does Kansas Have In Blake Jablonski?

Prior to last season here at RCT we took a look at a potential walk on linebacker candidate in Chea Peterman.  Linebacker was a thin position that had sustained some injury and Peterman's story was worth a look.

After last season's uncertainty at quarterback, and a solid Spring Game performance by redshirt freshman Blake Jablonski, many seemed to take note and begin to ask questions about the Kansas native and I thought I'd take a similar look at what he might bring to the table. It's not that I'm shouting from the rooftops that Blake Jablonski should be the starting quarterback, but following the discussion I was curious to know a little more about the player and what we have in our current QB3.

Saturday April 30th marked this years Spring football game and the final event of Spring football for the Kansas Jayhawks.  One of the more widely viewed competitions this Spring and headed into Summer and Fall is without question the quarterback competition.  Brock Berglund's early arrival and then departure left most of the conversation focused on two players, Jordan Webb and Quinn Mecham.  But what about the third signal caller currently on campus?

Blake Jablonski is a redshirt freshman out of Wichita Kansas.  During the Spring game Jablonski completed 8 of 13 passes for 76 yards and looked as effective in moving the offense as the other two candidates.  Jablonski had the highest completion percentage of the three quarterbacks and ranked comparably in terms of yards per completion. In addition Jablonski twice led the 2nd team offense against the 1st team defense on long drives down the field.  One series went 16 plays and the other 12 plays.

Obviously the Spring game needs to be taken for what it is, but with the quarterback position at Kansas searching for some competition and continuity it makes you wonder what Kansas might potentially find in a player like Blake.  Especially when you consider Gill's emphasis on the best player playing, giving EVERYONE an opportunity to earn their spot and let's not forget that Gill understands the value of a strong walk on program from his days at Nebraska.

So who is Blake Jablonski?  What's his background?  How did he end up at Kansas and where does this place him in terms of his value to the Kansas Jayhawk football program?

It might be easy to point to Jablonski and question his place based on the fact that he is a preferred walk on with the team and he's also just a redshirt freshman.  Webb has been in the system longer, Mecham is a senior, Jablonski seems like a logical scout team player based on his performance in that roll a year ago and the impending arrival of two Turner Gill recruits at the position.  But if you look a little more closely at his background it might not be that simple.

Those that know him better and those that familiar with him would most likely describe him as an exceptional athlete.  During his senior year he was named one of the top 11 players in the state of Kansas in football and at the same time he excelled on the basketball court.  In fact up until the end of his junior year the path that seemed more likely was that of a college basketball scholarship.  Blake played on three state champion basketball teams starting very early in his basketball career.  Blake was named All State in basketball and averaged just shy of 20 points per game while leading the State of Kansas in three point shooting.

Throw in a State championship on the football field along with single season State records for passing yards (3,899) and passing touchdowns (48) and you have a player that fits what Turner Gill is looking for.  During his signing day presser in 2011 Turner Gill emphasized that he wants winners and Jablonski certainly fit that mold when Gill was putting together his initial class on short notice in early 2010.  To give you an idea Jablonski's football team went 23-1 in his final two years and on the basketball court Jablonski recorded a 123-2 record over his career.

Nice background, winning background and a successful athlete.  When you compare him to the more commonly discussed Mecham and Webb he stacked up well from a statistical standpoint at the high school level and he clearly stacks up as a winner.  That leads to the question of why.  Why Kansas?  Why football?  And perhaps how did Turner Gill find him and why didn't Jablonski receive more attention?

It goes back to the fact that all his life until very late Jablonski viewed himself as a basketball player.  In a July 2010 article for CatchItKansas.com Jablonski states, "Basketball was my life, that's what I did."  The point of the story was discussing the early success that Blake had on the basketball court while football was something that developed much later.  By his senior year it developed into the path he wanted to pursue, but when you consider the world of recruiting that can sometimes be too late.

With recruiting, especially at the quarterback position, a big part of getting your name out there and drawing interest has to do with your junior film and getting out to quarterback camps and other team camps in order to be seen.  Jablonski had a more limited junior film and didn't participate in many of those camps resulting in an uphill battle for recognition despite a great senior season.

Jablonski did receive the earliest attention from Harvard, a place he was familiar with because his sister played basketball during her collegiate career.   Beyond that Blake received interest from some fairly attractive program including University of Miami, Tennessee and TCU.  All three schools offered a preferred walk on spot and TCU considered an offer but ultimately decided against it. In a way Jablonski was somewhat lost in the recruiting hype despite performing well.  At the same time when you frame a preferred walk on as someone who was also offered a similar spot by an SEC school in Tennessee,  a name program like Miami and a current National player in TCU, it does lend more credibility to the players potential.

That brings us to Jablonski's decision to attend Kansas.  With a few options to consider Blake was still undecided in March when coach Gill made a call to Wichita Collegiate coach Bill Messamore.  Gill asked that Blake give him a call where he would offer Jablonski a spot as a preferred walk on.

If you think back to Gill's first year recruiting it was a bit of a whirlwind with the coach working to hold a class together while also finding his bearings in the State of Kansas. Interestingly Gill as a coach was familiar with Wichita Collegiate from his time at Nebraska.  Some may remember a player named DeAngelo Evans who played at Collegiate and who Gill persuaded to attend Nebraska.  Coincidentally Evans had in fact coached Jablonski in middle school.  Again, Gill knows the value of a walk on program and immediately found players in the State that he thought could contribute.  Jablonski and other local Kansas players including Hutchinson running back Josh Smith to were some of the first to receive those preferred walk on offers.  The decision at that point was an easy one for Blake.  He had grown up a Jayhawk fan and he had watched two older brothers graduate as Jayhawks and the opportunity to stay in his home State and pursue his goals was an easy one.

It's a great story.  Local player floats under the radar and ends up earning the opportunity to compete at his home State school.  If this were the movies he'd find his way into a starting role and carry Kansas back to the level of Orange Bowl greatness.  But it's not the movies and it isn't that easy.  Still the Jayhawk Spring football game and Jablonski's efforts were noticed.

Now if you flash back to last fall, I myself had heard Jablonski's name with regards to his efforts on the scout team.  Blake earned scout team player of the week for the Colorado game and received strong reviews for effectively running the scout team offense against the 1st and 2nd team defenses during game preparation.  Competition and preparation are critical to any program and Blake provided a bit of both while earning the respect of those he was competing against. 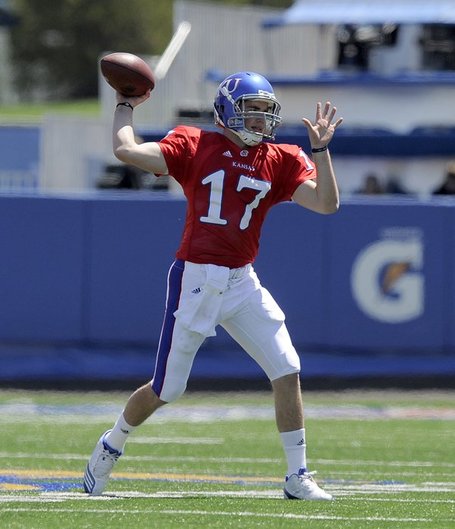 Fast forward to Spring and you have a redshirt freshman who is also a preferred walk on and he most likely understands completely the challenge that he has to face.  Jablonski is in the situation where he will have to prove time and time again that he deserves the opportunity.  With that in mind the Spring game can result in one of three things.  1.) A day without the opportunity 2.)  a day where a player performs poorly or 3.) a day where a player steps on the field does a solid job and buys himself an opportunity.

If you're pinpointing the result for Blake Jablonski you'd have to go with option three and recognize that on some level Jablonski has thrown his name in the hat to compete at quarterback.  Following the Spring game coach Gill commented on Jablonski stating that the quarterback was, "Very, very impressive what he did today. There were a lot of situations where he had 3rd and 4th downs where he made plays and that's a good sign."

Now that might not exactly sound like a ringing endorsement as far as Blake being in the conversation as a potential starter, but one year ago Mecham was pretty much expected to redshirt and he was thrown in due to injury and it always seemed that the staff had very little confidence with that situation.  At the moment and with his work over the last year in the program, it would at least appear to be the case that the Kansas staff has some confidence and trust in a player like Jablonski should they call on him.

No this isn't fantasy camp and if you asked him, Jablonski would probably be the first to tell you that he is going to have to work twice as hard as Webb, Mecham and maybe even Berglund and Cummings just to stay even in the coaches eyes.  But a player that understands that and pushes everyone in front of him because of it can be invaluable and quite frankly you just never know how things are going to develop.  It's one scrimmage, it's one day, but after hearing about him last fall and seeing people take note of his performance a week and a half ago it does at least raise the question of "what do we have here"?