Share All sharing options for: Rock Chalk Talk and The Boom Kings Combine In Corporate Merger! 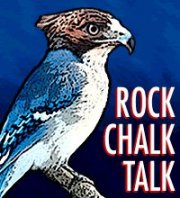 Yeah that's right.  The headline is deserving of a front page nod in the WSJ or the NY Timesl for the huge implications.  Most likely unemployment will return to a reasonable level, world hunger will cease to exist and recession will become a term that an entire generation will never know. this is HUGE! (sarcasm).

Anyway back to reality and the topic at hand.  That of course is the very exciting news that we are going to be welcoming our friends from Oread Boom Kings to the RCT team.

That's the short of it, but for a full and proper introduction, a little more explanation on the merger as well as some additional news and comments  I'll have you head to the other side of the jump and get the rest of the story.   .

Most likely many of you will know a few of our regulars around here from their "home site" Oread Boom Kings. Well, back in 2007 a couple guys going by the handles of Hiphopopotamus and Gingerballs started an independent Kansas blog called "Kansas Jayhawks: It's Business Time".  Of course Kansas would go on to have one of their most successful years in athletic history posting both an Orange Bowl title and a National title in that same academic year.

Obviously that stood as reason to believe that this independent Kansas blog was now charged with carrying the torch of Kansas athletics in one way or another.  That was a responsibility embraced by the sites founders.  Fast forward to the last year and "Kansas Jayhawks: It's Business Time" migrated over to the Barking Carnival/Fantake network of websites where they continued to grow.

One thing leads to another and as luck would have it SBNation recently acquired the fantake network in a move that combined two of the most successful blog networks on the web.  With that "The Boom Kings" are going to be migrating over and joining the RCT crew as we continue our growth.

Last month RCT surpassed 70,000 visitors in a single month for the first time in history and did so in the shortest month of the year.  In that same month we surpassed the big 1,000,000 visitor all time landmark and the growth continues to build at an solid pace.  With the major contributions of Warden and Fetch along with the track record of the OBK writers this will be another nice feather in the cap as RCT continues to work toward being one of the best Kansas websites on the web.

Some more news and a couple more potential additions to our community here in the coming weeks as we approach spring football.  We're stepping up our game and we think we've got just the people to continue doing that.

And of course this isn't about the authors around here, we're fans like anyone else and all are encouraged to join in using the fanpost and fanshot features.  Our goal is to provide content, conversation and an opportunity for discussion but it's only as good as the conversation that comes with it.  I'm biased, but I think this is one of heck of a community in terms of the rationality of the fanbase as well as the quality of the conversation so if you've got an opinion please share it.

With that, a warm welcome to HipHop and Gingerballs and I fully expect that we now return to a BCS bowl and win a National Title in the very near future.