Share All sharing options for: KenPom'n The NCAA Tournament Bracket

This year's tournament field/bracket has caused me more head scratching than I ever remember, that could be due to a little more focus on the event this year or I'm losing my memory slowly or the bracket just being screwed up.  Screwed up is obviously not a very clear term and will have a little different meaning to everyone reading this.  For me, screwed up means there are some really questionable seeds this year based on what we learned throughout the season.  Not to choose a side already but I have no idea what the committee could say to defend Florida at a #2, Utah State at a #12, and maybe the worst of all is Texas as a #4.

In an effort to look at the bracket and maybe identify questionable seeding, I charted each region's top 13 seeds and their ranks at KenPom.  KenPom's not perfect and definitely not the only ranking worth looking at but they are objective numbers and they are widely known (they're also very easy to work with, thanks Ken!).  Why 13?  Because I that's the lowest seeded team with a Pomeroy ranking better than 50.  With all of that out of the way, what can we try to determine?

Discussion after the jump. 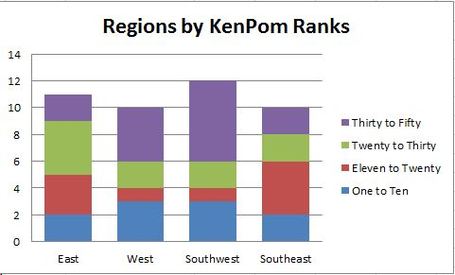 Not too bad of a job by the committee when looking at balance throughout the regions.  Each region has either two or three of teams from Pomeroy's top 10.  The East and Southeast are heavy in the teens.  The East is again tough with teams in the 20-30 range with the rest of the regions being equal.  The Southwest has more teams in the top 50 than all other regions but half being below 30 makes that easier to stomach.

Overall grade would be about a C-.  Balance earns an A minus, they're not going to be perfectly balanced because of the seeding rules with conferences and all of that.  This is close and it works for me.  Execution has to earn an F though.  The overall #1 seed has the most teams in the top 30 in their region, not to mention the 6th ranked team as a potential Sweet 16 game.  The Southeast has a fair number of top teams...their problem is the #2 seed is actually ranked lower than the #12 and #13.  So those teams who have had great seasons get matched up with teams that are much stronger than they ought to be paired against.

One last gripe with seeding, the 8/9 in the Southeast is ranked 52 and 54 by Pomeroy.  Nothing wrong with that and one of those is Butler, a team that was in the championship last year.  The 8/9 in KU's bracket though are 24 and 20 at KenPom, both higher than the 5, 6, or 7 in the region.

Strength of regions: It's close but Ohio State probably has the toughest road and the most teams in their region with a realistic shot at knocking them out of the tournament.  The easiest region to win looks like the West to me.  The top 2 teams are Duke and Texas, who are also on the same side of this region.  The winner of that finds a way to contain Kemba Walker and they're in Houston.  The Southwest has four teams that could conceivably make it to Houston and the Southeast has like 8(!) that really could win that and end up in the Final Four.

This post isn't meant to slam on the committee and worship at the alter of Kenpom, just thought it was very interesting how some of the seeds and rankings diverged.  The great thing about college basketball is that we're not stuck in fairy tale world talking about what-ifs, we'll get to see a lot of this settled on the court.  Washington has a chance to validate what Pomeroy's numbers have been saying all year or they pull a USC and go home quickly.  The committee might be able to come back and say "boom, told you Texas was a #4" if they fall to Duke in the Sweet 16.