Kansas Vs. Boston: Previewing The Terriers

Share All sharing options for: Kansas Vs. Boston: Previewing The Terriers

The no. 1 seed facing off against the no. 16 seed isn't supposed to generate a significant amount of excitement, but when it's your team tipping off in that game that probably changes things.  Whether you're a Terrier fan looking to make history or a Kansas fan hoping to run away with things early, this is the tourney and it's what fans wait for all season long.

Some quick background on Boston in general.  They are the Terriers and they of course are based out of Boston.  Boston comes out of the America East conference which claims other members such as Vermont, Maine and Stony Brook.  The University has over 31,000 students including 18,000 at the undergraduate level.  This will mark the Terriers 7th NCAA tournament appearance and they actually hold a 2-6 record all time in the NCAA tournament.

The Terriers enter the tournament on an ELEVEN game winning streak dating back to the 1st of February.  The Terriers last loss actually occurred on Kansas day(January 29th) which of course marks the date when Kansas entered the Union as the 34th State.

Boston is led by a 6'5" senior guard out of the Bronx in New York named John Holland.  Holland averages 19.2 points per game and 5.9 rebounds per contest, numbers that are almost identical to his junior year with the Terriers.  Holland also leads the team in steals and three pointers per game averaging 2.2 per contest while shooting 32% from beyond the arc. Holland's 19.2 also leads the America East conference in scoring.

Boston's second leading scorer is a 6'6" guard out of Seattle Washington, Darryl Partin.  Partin checks in with 14.5 points and 3.4 rebounds per contest.  Partin is a second on the team from beyond the arc in terms of volume but does shoot it slightly better than Holland at 36%.

6'6" junior forward Patrick Hazel is one of the Terriers key players on the interior.  The big man from Jamaica New York is tied with Holland for the team lead at 5.9 rebounds per contest.  Hazel also leads the team in blocks while averaging 4.6 points per contest.

Freshman point guard DJ Irving is a 30+ minute starter for the Terriers and leads the team in assists as the primary ball handler.  Irving checks in with 3.3 assists per game to go along with 7.9 points.

Rounding out the Terrier starters is 6'7" forward Dom Morris.  Morris is a 6'7" freshman that averages 5.6 points and 4.7 rebounds per game. 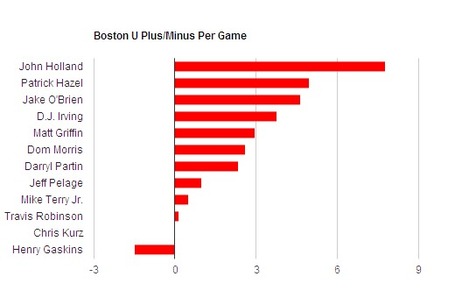 Jake O'Brien was an all conference returning starter for the Terriers but the 6'8" forward had season ending foot Surgery right around the time that the Boston win streak started in early February.  The forward from Weymouth Maine was the third on the Terriers that averaged in double figures in the scoring column at 10.9 per game.

If you need to know one thing about Boston it's that they are not a good shooting team.  In fact they rank in the bottom tier of the NCAA in terms of eFG%.  Defensively they fare a little better checking in at #46 nationally, but that is most likely a product of a bad conference as opposed to an indication of a lockdown defense in the making.

The Terriers don't list a player over 6'8" and their starting lineup reaches a peak at 6'7".  That certainly bodes well for the Morris twins working on the interior for Kansas especially on the offensive glass where Boston struggles a great deal to hold opponents at bay.

From a pure wins and losses standpoint Boston is certainly a hot team.  Eleven games in a row is the current streak dating back to January 29th and their last loss to the University of New Hampshire.

Glancing at tournament teams that have faced the Terriers we have Kentucky who won by a score of 91-57,  Villanova winning by a score of 82-66 a 52-49 loss to Bucknell and a big win 51-50 over Hampton.

All in all the biggest problem that Boston will face is being able to score enough to keep pace as they aren't a very good offensive team and they are also likely to get beat fairly handily on the interior where they just don't have the size to handle the Kansas bigs.