One of the popular topics around the Internet in the days leading up to NCAA Tournament is Kansas and their early exits.  Bucknell, Bradley, and Northern Iowa have made it easy for fans of all teams to point at Bill Self and start the wisecracks.  The best reply is obviously- 2008.  Most fans that head to this territory would trade more things than I care to name for a 2008.  Or you could remind them of the rules of being a fan according to Bill Simmons, specifically:

After your team wins a championship, they immediately get a five-year grace period: You can't complain about anything that happens with your team (trades, draft picks, salary-cap cuts, coaching moves) for five years. There are no exceptions.

As we all know, that doesn't always work either.  The next step is to turn to the numbers and see what they tell us.  To do this, we need a few things to start.  The seed for Bill Self coached teams in the tournament, the expected wins by seed, and (for good measure) a list of the best coaches in basketball so we can compare him.  The seeds are easy enough to grab at Kenpom and the PASE (performance against seed expectation).

Numbers after the jump.

Lets dive right into the heart of it and look at the average PASE for five of the best coaches from 2004 to 2010. 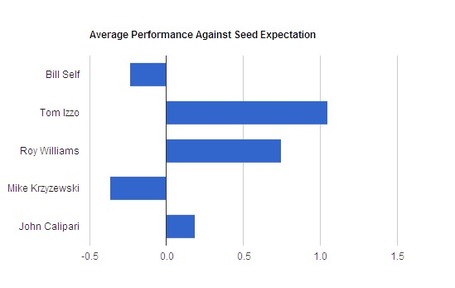 Not a great start for our man.  Since 2004, Kansas has underperformed by an average of -.24 wins.  If you look at the one coach who has performed worse than Bill Self during this time, you'll know what quiets everyone down quickly.  Win the championship this year (or get close) and the jokes will become comical.  Seeing Roy Williams look good here caught me off guard, guess that's what winning 6 games twice over a short span will do.  Izzo does what he does in March, whether he has some good luck with seeding and matchups or if he is just that is good could be a decent discussion though.

There is one more part of this that should be addressed before we accept this as an important piece of evidence.  If you go back to the PASE chart linked above, you'll see the expected wins drop dramatically once you get lower than the top seeds.  Looking at the same time frame, the chart below has the average seed for each coach's team. 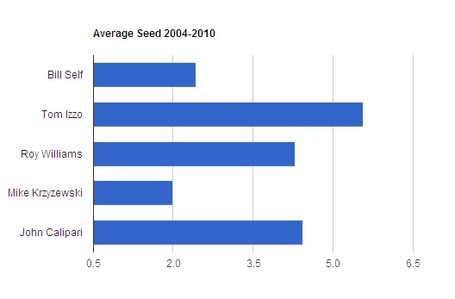 The coaches that grade out the worst in PASE are also the two guys that have the highest expectations year in and year out.  This graph might not be the best to show that though because both Calipari and Williams have a "17 seed" in their average, didn't know how else to handle missing the tournament.  That's surely worse than losing in the 2nd round, right?  Anyway, Izzo also benefits here because his seed average is the worst of the bunch (by far: 7,5,6,9,5,2,5) and he hasn't missed a tournament in this span.

What do you think?  Assuming the high seed is recognition for always being very good in the regular season, I can stomach a few disappointments with a championship sprinkled in here and there.