Kansas And Texas Are The Big 12 Contenders

Share All sharing options for: Kansas And Texas Are The Big 12 Contenders

At the beginning of the year, the coaches of the Big 12 said Kansas wouldn't be at the top of the conference at the end of the season.  It appears they might have been correct on that one but perhaps they picked the wrong team as far as who is going to take the crown.

The preseason favorite sits in 9th place while the team picked 3rd sits fairly comfortably in the top spot.  Overall, the season has to be considered a down one for the conference.  Starting with Kansas State and followed by a disappointing season out of Baylor, the top end strength of the conference is limited to two and maybe three teams.  As of this week, there is legitimate talk about the Big 12 only getting four teams in the NCAA Tournament.

As for the championship, only two of those teams really have a shot at the conference title.  Texas A&M sits at 4-3 in Big 12 play and has already lost to Texas twice.  For them to even have a hope of contention, Texas will have to collapse harder than they did last year.  The other team might have been able to sneak into contention would be Missouri, but a fourth loss at Oklahoma State sends Mizzou to 3-4 and they have yet to win a Big 12 game on the road.

The only real threat to the Longhorns in the conference right now has to be the Jayhawks.  Kansas sits at 6-1 in conference play but the loss comes to Texas.  Did you notice a trend among the three teams that could be or at one time could have been considered contenders?  Just in case you didn't, Texas has already taken care of them.  Each team needs help from the rest of the conference in order to catch Texas.

The good news for Kansas fans is the play since facing Texas.  The offense has been as efficient as it has been all year and they're doing it against decent competition.  The defense hasn't been the trademark Bill Self defense yet but it does look like it's getting there.  In the end we have to remind ourselves that catching Texas isn't the goal right now, playing great basketball and making a deep tournament run has to be priority number one.

Now how do the Jayhawks and Longhorns compare over the long term?  Let's take a look. 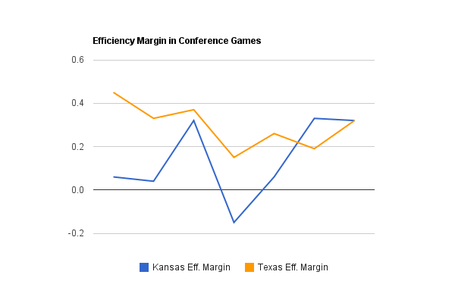 What we're seeing is a Texas team that started conference play hot and they're staying hot to date.  For Kansas, it shows a little bit of the opposite.  We know the team didn't start play extremely well but things have came together over the last few games for the Jayhawks.  The most disturbing thing might be that Texas has done this against a stretch that included A&M twice, Missouri at home, and Kansas in Lawrence.  The meat of their schedule has been turned into hamburger.

Efficiency margin is great for looking at the team picture but it doesn't tell us much about how each team is doing their damage and if it is sustainable.  For that, we have to look at the offense and defense. 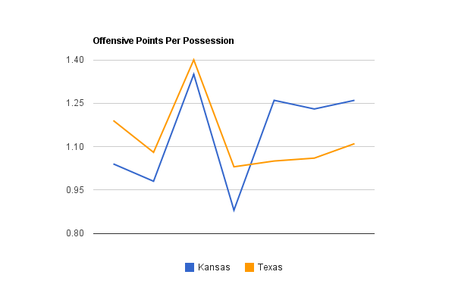 Looking at the offensive side could send a couple different signals.  On a positive note the Jayhawks are better than the Longhorns.  It's interesting how the first three games mirror each other almost exactly and then the last three games show the Jayhawks as a much stronger offensive team.  The scoring balance for the Jayhawks in the recent games becomes pretty clear.  The first couple of conference games were "Marcus and the Hawks".  The last few games have featured everyone.  Big difference in results.

The negative side would say that even though UT's offense hasn't been great, their efficiency margin has stayed above .2 ppp.

*Side note: Yes, Texas is better on offense this year but you can disregard a lot of the "Rick Barnes totally changed what he thought" talk.  In 2009-10, UT's adjusted offensive efficiency was 113.5 and this season it's 114.4 so far.  So this stuff:

Barnes related – in a very self-deprecating manner – that he spent several hours conferring with Bobby Knight about the need to commit to an offensive system and Knight told him some pretty harsh things that he needed to hear. His failure to commit to an offensive system was the main thing holding him back from making the move from good to great as a coach. He wants to be great. He wants Texas to be great. He doesn’t care if we have short term hiccups if that means making the changes necessary.

Not buying it and here's why: 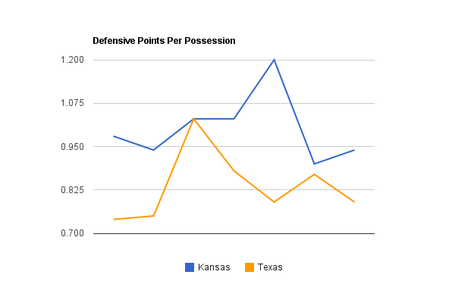 The Jayhawks best effort on defense (.9 ppp) is still higher than the Longhorns' average (.84).  This is somewhat scary to look at, especially if you believe in the "defense never takes a night off" line.  Texas is far and away the best defensive team in the nation, mostly because teams just don't make shots against them.  Conference opponents have an average eFG% of 38 in conference games, that is again lower than Kansas has done just once.

Right now, the UT defense carries them to a slight edge over the Jayhawks.  Can they sustain that effort through 16 conference games, 3 tournament games, and 6 more tournament games while traveling?  We're going to find out.  One still has to believe they'll drop one along the way, Kansas just needs to continue to take care of business on the offensive end and stay away from the lackadaisical defensive effort.

Just to provide a little more optimism to your eyes, a comparison of the efficiency margins for last year and this year.  Remember last year's team was "great, unanimous #1" and all kinds of other accolades, surely this team that wouldn't hold a candle through 7 games, right? 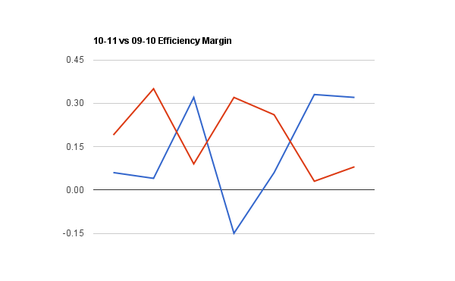 Can you tell me which team is better from this information?  I'm getting my hopes up again.