Note to the Big 12: Don't Play Defense Like Texas Tech

As a fan of the Jayhawks, watching Tuesday night's game against the Red Raiders was a lot of fun.  Kansas did about whatever they wanted throughout the game and the Red Raiders really looked like they were just ready to go home, even though they were playing at home.  As fetch pointed out in the statistical recap, the Jayhawks scored a little over 1.2 points per possession and Texas Tech scored just under a point per possession for the game.  Even those numbers make this game appear closer than it actually was.

Using Dean Oliver's formula for estimating possessions (FGA-OR+TOV+(0.4*FTA), the first half numbers have Kansas at 1.32 ppp and Texas Tech at .76 ppp.  That's a much better picture of the game I watched on Tuesday night.  Before getting to Nebraska, lets take a look back at what made Kansas so successful on offense.

To start, the bigs for Kansas combined for 56 points and shot 66% on two pointers for the night.  Combine that with an efficient Brady Morningstar and Josh S(h)elby and you get the full Jayhawk treatment.

What doesn't make sense is Tech's approach to guarding the Kansas bigs.  Either Pat Knight was hoping they could just outscore the Jayhawks or he and his staff are in way over their head.  There is simply no excuse for the approach Tech used on defense.  Below, you can see exactly what I'm talking about.  The ball is on the wing, Kansas has Marcus Morris posted up on the block and Tech has nobody in position to help. 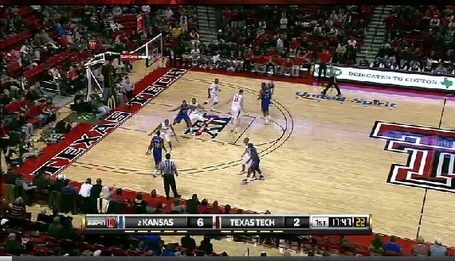 Sometimes when going back and taking isolated moments from a game, we can give a misleading picture.  Over the course of 40 minutes, there are going to be plays and situations that look good and some that look really bad.  What stands out to me is that this was far from isolated on Tuesday. 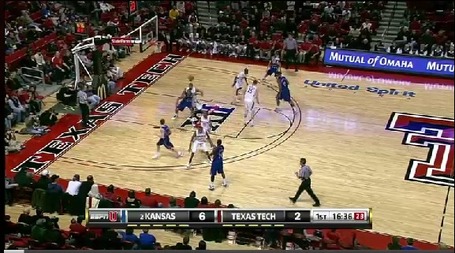 Another screen shot where we see Texas Tech in no position to help or double the post once the ball is entered.  Look at the position of the weak side Kansas players and the defense on them, almost identical to the previous picture.  Did Pat Knight really want to have his men guard the Morri and Thomas Robinson one on one? 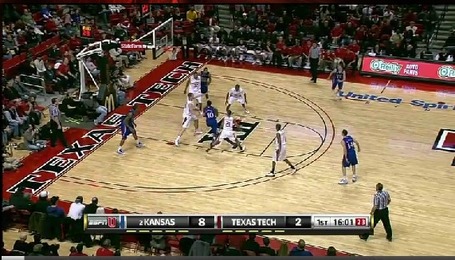 Finally one more from Tuesday night, instead of showing a simple post entry from the wing we have an example of dribble penetration breaking down the defense.  Weak side guard is still too far away to be any help at all.  He is actually in awful position, just stuck in no man's land.  He can't help on the penetration and he's too far off him man to pressure a shot if Taylor were to kick it out.  In the end, Taylor dropped it off Thomas Robinson for an easy layup.

Heading into Saturday, we know Doc Sadler's team will play defense.  The couple things they will do is clog up the paint and get back in defensive transition.  Check the two screen grabs I took from their K-State game on Wednesday night and compare them to the pictures from Texas Tech.

The results weren't great for Nebraska in Manhattan but they at least put themselves in position to succeed, that can't be said about Pat Knight and his squad. 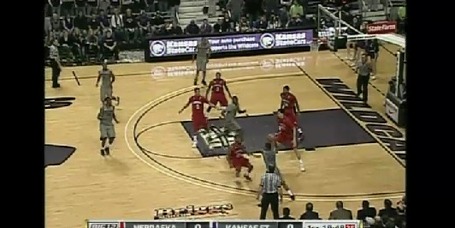 Ball on the wing and a KSU big heading to the block.  Check out the defensive positioning.  They're all aware of where the ball is and they're all in position to help.  At times, they sag off their man so much their defense appears to be a zone. 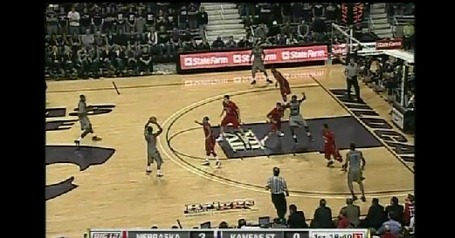 This last one is taken following a missed shot.  K-State tries to push the ball for a good look in transition but Nebraska is already back and waiting for them.  Again, all players within a step of the paint.  The amazing thing to me, 3 seconds have ran off the shot clock here and every single defender is already in position on the defensive end.

Going to have to make some shots in Lincoln because they will make it tough to for the bigs to score.