After another topsy turvy week the Big 12 looks as muddled as ever, with a clear top 2, and then the next 6 which could be arranged in pretty much any permutation you would like.

As for the NCAA tournament picture it looks like only 5 will get in, but it is also possible that the Nebraska-Colorado tilt on the last day of the regular season could be a play-in to the NCAA tournament, assuming neither team clunks out in the Big 12 tournament.

I joked after the game Saturday that Texas losing at Nebraska and Colorado were just going away presents to the two teams, but it got me thinking how much Texas benefited from playing in the south this year rather than the north:

To start, their efficiency margins in their South games vs. in their North games:

On the surface it looks like Texas has had a much tougher task against North teams than against South teams, but the Longhorns have played on the road for three of their five North games, so keep that in mind. Then again, they gave up 70 points in 62 possessions at Nebraska and 91 in 75 possessions at Colorado. I'm not saying they would be a midpack team playing in the North, but their efficiency margin would be merely good rather than the great mark we have seen.

I have been into the blind player comparisons as of late, so let's take a look at another one, this being how two Jayhawks have fared in conference play this year: 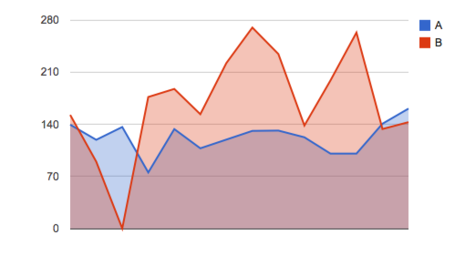 These two lines represent the game by game offensive ratings for two players. Player A (the blue line) is Marcus Morris, national player of the year candidate. Player B is Brady Morningstar, sleepy eyed Kansan assassin extraordinaire. Obviously McMorris uses more possessions and is the focal point of the offense and all that, but this graph shows just how good and how valuable the oldest player in the Big 12 has been this season.

I don't have anything cool on Kansas state, so instead it's time for this week in pictures of my future wife (hopefully you can look at bikini clad women at work).

Not only did Colorado erase a 20 point deficit against Texas on Saturday, they scored 58 points in the second half, or more than the entire game output of 13 Texas opponents this season.

And if you like large swings, check out the win probability graph from the game.

A KU centric Missouri note: This is the 5th time in the past 10 years Kansas finishes their year at Columbia. They did so in 2003-2005 and then again last year. Their record in the previous four games is 3-1, the lone loss coming in 2005.

Last week I brought you the story of how Texas A&M sucks at blocking shots (and getting blocked) despite the fact that they are reasonably tall.

Truthfully, Baylor should be higher than this, but I went out on a limb and thought they would win the national championship this year, so this is their penance. Huge punishment, I know.

Anyways, Baylor is 339th in terms of getting the ball stolen from them, getting it thieved on 12.4% of their possessions. The only other power conference teams ranked lower than 300 are LSU, Wake Forest, and South Florida. Baylor has some slim NCAA hopes; the others, of course, do not.

Oklahoma State is awful, but they're really awful at shooting threes. They shoot just 29% from beyond the arc, worse than any power conference team than Seton Hall.

The Sooners had their best PPP effort of Big 12 conference play Saturday vs. Kansas. The Sooners have probably the weirdest profile in the Big 12. They are 12th in efficiency, yet they are 4th in 2 point percentage and 3rd in FT%. It probably doesn't help that they don't get many shots up (8th in TO%) and don't get a re-do too often (12th in Oreb%)

File this under bad coaching or a small sample? Texas Tech is third in the conference in three point shooting, shooting 38.9% in Big 12 play, but takes the 2nd fewest amount of threes.

They won a game last week, but they're still just 2-12 in conference play. They do have two players shooting above 43% from three though.