Note: I might be out of town on Sunday, which is when I usually write these. So hopefully no upsets happen that screw up my order too much. Except Nebraska can win because I called that on twitter and I want to look smart. (update: woo!)

Selection Sunday is just three weeks away and as much as I like college basketball I really hate this time of year. Even more so this year it seems our fate is sealed: we're going to finish 2nd in the Big 12 and either be a 1 or 2 seed in the NCAA tournament out West. I know I am in the minority on this but whether we are a 1 or a 2 doesn't really matter to me. The only game in which it makes a difference is the Sweet 16, and I would imagine that 2 seeds face 6 seeds (or perhaps 11s?) enough to negate being slotted into playing a 3 instead of a 4 or 5. And once you get to the Elite 8 the only difference is the color of the jersey.

Courtesy of Basketball Prospectus's John Gasaway, Texas's defense has been almost 3 standard deviations better than the rest of the Big 12 in conference play this year, which has never been equaled. What's interesting is that they do it without forcing turnovers. They are 11th in conference play in turnover percentage and just 222nd in the country.

To me this seems both good and bad for the Longhorns. It's good because they aren't vulnerable to a team like Wisconsin who never turns it over, but while the Longhorns allow opponents to shoot just 39.2% from two, they either have extended their defense out to 20 feet extremely effectively or they have gotten lucky in terms of three point defense, given that their opponents are shooting just 28% from beyond the arc. Their opponents have taken the 5th fewest threes, making me lean towards the former, but I would be shocked if they go an entire NCAA tournament without an opponent getting hot from three.

(note: since Texas lost I'd just like to point out that the only undefeated team in Big 12 history will always be the 2001-02 Kansas team, captained by Jeff Carey and some guy named Jeff Boschee).

The flavor of the week (not just on RCT but reading on twitter, other sites, etc.) seems to be complaining about Kansas turning it over far too much/playing out of control. Below is their turnover rate both overall and in conference play, and the corresponding mark for the last few national champions (KenPom only does conference only stats back to 2008 and I will be damned if I'm doing all that math)

Not only is a high turnover rate not a bar to winning a national title, this year's team is actually  better in that department than teams who won national titles. And, highlighted for your pleasure, is just how similar we are to the 2008 team that every future Kansas team is doomed to be compared to.

I seriously can't think of anything cool to say about Missouri. Instead check out some SI Swimsuit pictures of my future wife Kate Upton, who not only has vaulted to #2 on my list but I have decided to nominate whomever discovered her for a Nobel Prize.

I almost bumped K State all the way up here because their win was more impressive than Nebraska's, but I have been the Huskers' bandwagon driver all year so I had to put them here.

I've talked a lot about Nebraska's defense this year, but I want to focus on some offense for a second. Point guard Lance Jeter is quietly having a great season (and, given the people he has to work with, I think he might be the starting PG on my all Big XII team right now.) Jeter has played in three fourths of the Huskers' minutes, has a 111.5 Offensive rating, a eFG of 53.1%, an assist rate of 31.6% and a turnover rate of only 17.3%. Here is the list of players in tBCS conferences who have played that many minutes, have an O-rating over 110, over 20% possessions used, an eFG over 50%, an assist rate over 30% and a TO rate under 20%:

and Jeter. That's the list. Jackson surprised me as well, but the other three are among the most heralded players in the country, and all three have much better supporting casts than Jeter.

Personally I think Kansas State is an NCAA tournament team right now, or at least very very close. They have wins over teams ranked 3rd, 31st, 43rd, 49th and 53rd in the current KenPom rankings (though only one of those was on the road), and their only losses outside the top 50 are to Colorado. The average of all their losses is 37.33 in the KenPom rankings, which stacks up favorably with their fellow Big XII bubble teams:

Though the Aggies aren't exactly short (their effective height is 96th, for an explanation of effective height read this), they both get a ton of their shots blocked (11.6%, 320th) and fail to block a lot of their opponents' shots (4.8%, 330th). Only 6 schools  are ranked 300th or worse in both offensive and defensive block%, and other than A&M only Toledo has an above 0 effective height.

Alec Burks and Cory Higgins obviously get the most pub, but every Colorado player except for one has an above average offensive rating. Yet the Buffs have the worst two point percentage in Big 12 play. Weird.

Speaking of Burks, NBAdraft.net currently has him 11th in their mock draft, going to Golden State. Overlooking the fact that I don't see how he gets on the court over Steph Curry and Monta Ellis, Burks doesn't really do a lot for me from an NBA perspective. He's 6'6" which is good, and he is adept at playing outside, but he shoots just 31.7% from three (and doesn't take many), and there are times he struggles at beating college guards off the dribble, so I don't see him doing it against NBA guards.

Last week I talked about Baylor Frosh Perry Jones. This week I'll focus on the other Jones, Anthony, who I think should shoot more. Below is the shot% and eFG% of Baylor's three highest volume shooters, and then Anthony Jones, who shoots second least on the team. 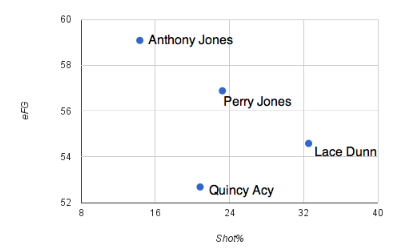 Texas Tech plays pretty darn fast. They are 35th in adjusted tempo and 4th in tempo in Big 12 conference play. Despite this they have broken 80 points only twice this year. That is some brutal offense.

The Cowboys definitely can't score, but in Big 12 play they actually have the 3rd best eFG allowed.

The Sooners are in the midst of their second 5 game losing streak of the year. At least this one doesn't feature Chaminade.

eeesh. The Cyclones have lost 10 games in a row, and finish with Texas, Nebraska, Colorado and K State. They might go 1-15 in conference. Go look at more Kate Upton pictures to get that taste out of your mouth.