Mid February is right in the middle of the worst period of the year in college hoops in my opinion. We're playing the Big 12 North teams for the second time, and conference tournament action is still a couple weeks away. Not a ton of movement this week, and I think the middle of the conference is still a mess and who the 3rd-10th best teams are is anyone's guess. But here's mine:

Kansas is in the midst of one of the best stretches of offensive basketball I have ever seen, scoring 192 points in 142 possessions this week vs. Missouri and Iowa State, for an average of 1.35 points per possession.

To help illustrate why the boost over the past few games, here is Tyshawn Taylor's offensive rating for every game of conference play: 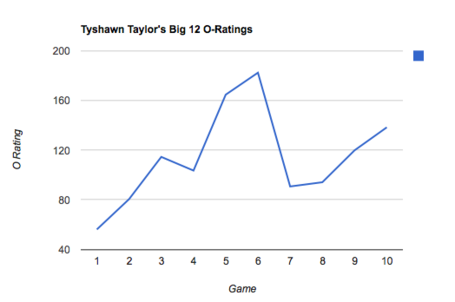 Granted it is not a perfect illustration, but after the Texas game (game 4), Tyshawn has played much better and Kansas's offense has gotten better with it.

Furthermore, Texas's offense hasn't been great, but they have benefited from a pair of Sophomores improving:

And it should be noted that while Hamilton took 28.3% of the shots on the floor last year even though the Horns had both Damion James and Dexter PIttman, he has taken even more shots this year, taking 32% of the team's shots while on the floor.

But even better than Hamilton's improvement has been that of J'Covan Brown: (credit to Luke Winn of SI).

The Tigers have also broken out the offense this week, putting up 86 points in 72 possessions on Monday, in Allen Fieldhouse no less.

One player who has been omitted from the Big 12 POY conversation is Marcus Denmon. He has almost a 60% eFG, which leads the team, even though he takes more shots than anyone else on the team.

But the best part of Denmon's game is his turnover percentage: at just 8%, it is 4th best in the country among qualifiers. He doesn't dish many assists, but here is the list of the top 10 BCS players in turnover rates:

Other than the fact that we learned why Wisconsin is so good, note that other than Jordan Taylor (who should be in the national POY discussion), Denmon is the only one on this list who has a major role in his team's offense.

A 9 point loss at Texas is nothing to sneeze at, and if not for a slow start and a major foul disparity we could be co-Big 12 leaders right now.

But today I want to focus on Baylor Freshman Perry Jones and how he stacks up against other Big 12 high lottery picks:

Jones is probably the worst of the four, but he also has the deadly combo of he plays on the worst team of the four and is used less than the other three players. Jones will probably be a top 2 or 3 pick in June and will absolutely deserve it.

The Aggies are also the last team to score over a point per possession against Texas, scoring 60 points in a 57 possession game on January 19th.

I still am in shrug my shoulders mode with the Huskers. They have the 12th best defense in the country, and despite the fact they are 114th in offense, they shoot 54.4% from two, which is 7th in the country. If they could shoot from three at all and take care of the ball they would be big time in the mix in the Big 12 race.

Replacing a Senior point guard is tough, but I'll be surprised if Nebraska isn't in the thick of things in the Big Whatever next year.

Speaking of players who don't get enough credit, I present to you Levi Knutson. The Senior has the 2nd best offensive rating in the country among players who play at least 40% of his team's minutes and have at least 12% possessions used. He also has a 67.8% eFG (3rd) and a 70.3% true shooting percentage (2nd).

The Wildcats don't allow Big 12 opponents to get off a ton of shots (22.7% turnovers forced, best in conference), but when they do it is usually bad news for the Wildcats, who are 9th in eFG allowed and 7th in 2pt% allowed. It is especially bad when their opponents shoot the threeball: K State's Big 12 opponents are shooting 39.8%, last in the conference. Sadly for them, their opponents are shooting the second most threes in conference play. Some of that shooting is luck, but some of it is the team's inability to stop teams from shooting threes even though they are being killed from beyond the arc.

The Cowboys have been brutal offensively in conference play, ranking last with a 43.5% eFG and 25% from three. Their most effective player by far is JP Olukemi, who draws 7.3 fouls per 40 minutes, which is 20th best in the country, and he knocks down his free throws at a 77% clip.

Recipe for diaster: the Sooners take the 4th most threes in conference, but are second worst in terms of percentage.

Texas Tech is pretty much a lock to finish bottom two in the Big 12, and when they do so they will be the first bottom two team in the Big 12 in the KenPom era to have a three game winning streak in conference play.

I am no expert, but this is not good (image courtesy of KenPom): 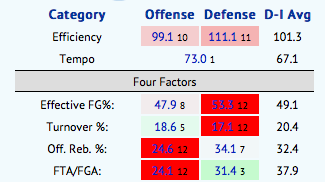