What Has Been The Difference For The Kansas Jayhawks?

Share All sharing options for: What Has Been The Difference For The Kansas Jayhawks?

We're going to start with this: 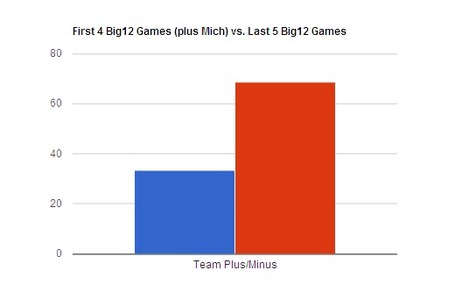 The blue bar is the team average for plus/minus in the first four games of conference play (plus Michigan) compared to the average since the Texas loss.  In the last five games, the Jayhawks have doubled their previous average.  A few explanations could be made about why the team has taken off and I'm not going to get into those.  The question we're going to tackle is what has happened on the court to cause such a dramatic jump in production for the team.

Diagnosis after the jump.

First up, averages for each player from the first five games and the last five of this 10 game stretch in graph form. 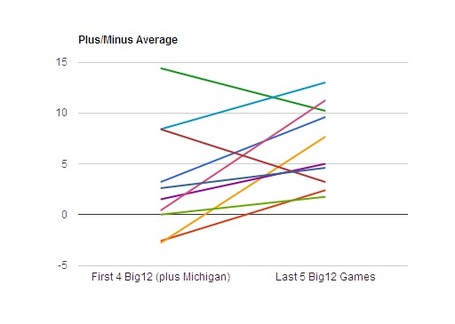 When that many players are trending up, things are going to look good.  The individual numbers are below with special attention given to the four who have had the biggest positive change.

The numbers here show that even though this current pace is likely unsustainable, nobody is really playing that out of their minds and carrying the team.  This many guys doing this many things well would seem like a great recipe for March success.