Dear Bill: Can We Chat?

Share All sharing options for: Dear Bill: Can We Chat?

Let me begin by saying you're clearly a genius and I'm not. You've ran one of the top programs in college basketball for almost a decade now. You've got seven Big 12 Championships in the last seven years. You're one of the few coaches in the nation that cannot be upgraded, wouldn't trade you for anyone. But can we talk about the season so far? You said the team would struggle with depth. We knew that was going to be an issue. You said that defense would have to be the key. We're also with you on that one. Ten games into the season and you've already beaten one of the best teams in the nation and went toe to toe with another. We're not complaining one bit, enjoying the ride.

What happened the other night against Davidson wasn't fun though.

"I’d like to see a lot of things," Self said of improvement for Thursday. "To see us actually attempt to guard, to get in (defensive) stance, to win 70 percent of the 50/50 balls, to not give up layups, to have enough discipline to guard the entire clock and not break down. For us to not play tired, to have more energy and passion, to run our stuff and try to execute what we do instead of being out there on our own."

Sounds like you agree. Good, we're on the same page so far. The part I'm curious about, why won't you use your bench to address the things listed here? Almost everything you listed for improvement is a sign of guys playing fatigued. Not going after loose balls? Tired. Defensive breakdowns? Tired. Not playing tired? Tired. I'm sure you're aware of this but do you realize your top 6 average more minutes per game than the rest of the conference? It's true. 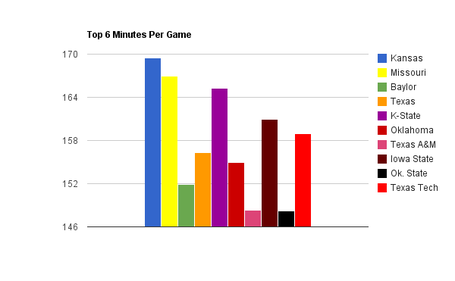 It's not a massive difference and it's probably not the best way to gauge who uses their bench. However, your top 6 are playing more minutes per night than everyone else. Of those six, four are playing over 30 minutes a night. One of those four just had some minor knee surgery and came back to play 33 minutes a week later. The same guy has had an offensive rating of 92 or below the last three games.

What I'm asking is let some of the newer guys go, let them get in and get after it here and there. Jeff Withey played his way onto the bench in the first half of the game and only logged around 12 minutes. That's not a problem by itself but you're giving up any rebounding advantage by replacing him with Teahan. The offense also becomes pretty limited with Teahan and Releford sharing the 4. Remember Kevin Young? He looked great against Ohio State at the 4 and was solid in the first half against Davidson but only got to play about 3 minutes in the second half. There's also a young guy that can help spell Tyshawn at the point. He has struggled at times and him falling down while dribbling was a little embarrassing but he has some skills. A few minutes here and there isn't going to ruin a game and might help keep Taylor a little fresh.

As I was looking through some stuff for this chat with you, I went back to an old post I'd written about something called "depth ratio". It's a made up stat by a guy that used to write for a Michigan State blog but it compares how much your top two guys play to the 8th and 9th guys. As you can imagine, your ratio is pretty high this year. 4.06, over your time at Kansas that's the 3rd highest. 2008-09 was higher, coming in at 4.46. Remember how gassed that team looked towards the end of the year? We're heading down that road again here. Using that year as a comparison, I also wanted to see how they stacked up in the simple plus/minus to this year's team. 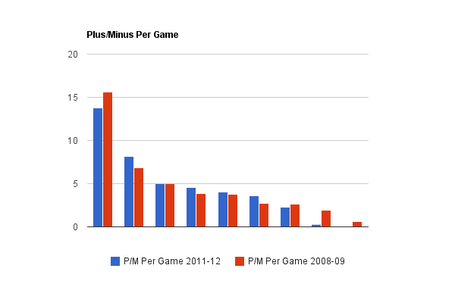 Pretty comparable for the top seven but nothing is coming from the 8th and 9th men this year. Not a thing. The chart for this year doesn't even include Tharpe because he's been so inconsequential in regards to playing time. Kevin Young is the sixth guy down on this year's team, that's while averaging 9 minutes a game or less than half of Teahan.

Let it loose a little bit. Give Young a chance to help. Give your guards a quick breather here and there by using Young at the 3 or Tharpe at the point for a couple of minutes. I know you don't like the idea of using young guys unless you have to but I'm telling you right now, you have to.