"You're never as good as you are after a win and never as bad as you are after a loss" The Jayhawks have seen both sides of that quote in their last two games, beating a very good Ohio State team and following it up with a loss to a very average Davidson team. Shot lights out against Ohio State and would struggle to hit water if they fell out of a boat against Davidson. After going back and watching the game, there are three things that stood out to me that are worthy of discussion. First, the team has to get better at dealing with double teams. With the makeup of the team this year, the bigs are going to get doubled early and often. Moving on, Withey has to be better. He doesn't need to be All-American good but he needs to have an impact. The third will be another post on its own later today or tomorrow.

First up, the double teams. There were multiple times the guards were stuck standing around the 3 pt line during the double team, not terrible by itself. But they also never moved one way or the other to create a passing lane to help Robinson or Withey get rid of the ball. The other problem I saw was the guard on the backside falling in love with the corner. It happened so often that I wonder if they're not coached on it but I have hard time believing that's where they're supposed to be. That's a very difficult cross-court pass and staying in the corner also brings the hoop into play. Check out the pictures below and see what you think. 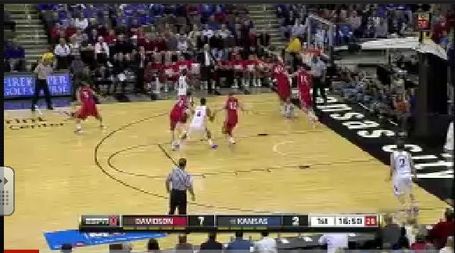 Not a fan of Teahan's positioning at all. Hanging out where he is allows the defense to cover every player that can receive a pass.

More pictures and a look at Withey's few minutes in the first half after the jump. 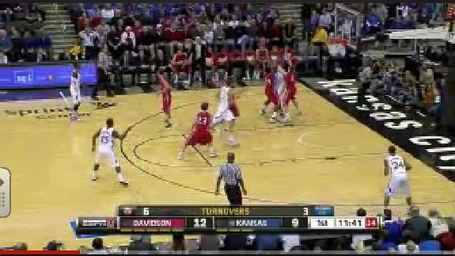 Back in the corner, the other two guards standing still, and Withey cutting down the lane. I'd rather see Withey stay high and Releford cut to the basket forcing the guy guarding Elijah to make a decision as we can see Withey is covered pretty well already.

One more, with this one handled much better. Releford flashes through the lane instead of planting himself on the perimeter. The cut puts him or Kevin Young in great position for an easy basket, Releford ends up drawing the foul. 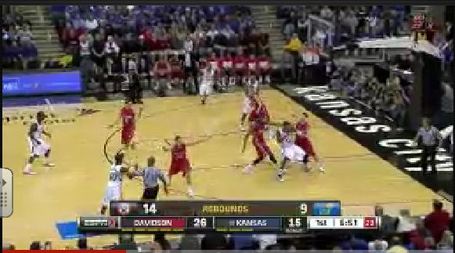 Releford starts his cut from the far corner and ends up receiving the pass in the middle of the lane after Robinson dribbles out of the double and creates space. This is the kind of play that has to be made more often, too many times the rest of the team gets stuck standing when the ball goes to T-Rob. Of course, if the guards are hitting three's they can hang out on the perimeter all night but I think we've seen enough this year to know we can't count on that.

His first half from the other night was similar to what we saw last year. Heavy feet and poor positioning on defense while just being a tall body on offense. Not sure if he was in the doghouse to start the game but he quickly worked his way there. As I said in fetch's post, his first two and a half minutes didn't go well at all. His man misses a wide open 3, no help on dribble penetration leading to a layup, and then his man hits a 3. He gets yanked three minutes into the game and then enters again with 14:31 left. They call a play and he gets an alley oop dunk but does little else for the next few minutes. Then this sequence comes on two consecutive possessions around the 10 minute mark. 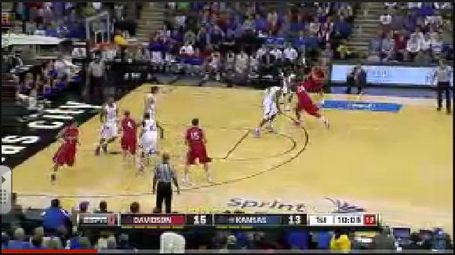 Check out Withey's positioning here, this is good. However, T-Rob's man at the top of the key cuts in front of T-Rob to the basket, receives the pass, and still makes a layup before Withey can even contest the shot. How all of that happens before Withey gets two steps is beyond me. The next possession punches Withey's ticket to the bench for the remainder of the half. 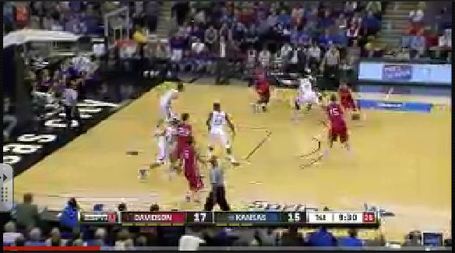 Withey's ready to help this time, the problem is his man is standing at the top of the key. Cohen receives the pass and drains the three before Withey gets to the free throw line. Unfortunately for the team, this was Withey's last action of the first half. Don't think it's a coincidence that we only ended up with 4 offensive rebounds in the half with Withey only playing around 7 minutes.

On to the good, Withey did have a pretty good second half. He scored 7 points, had a couple offensive boards, and a few blocks. A stupid foul/turnover combination on an illegal screen but overall a pretty good half. This team isn't good enough or deep enough to go without him for long stretches.