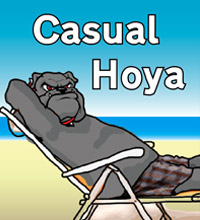 Tonight begins a three day pre-Thanksgiving week of basketball awesome'ness".  Who else is excited?  This will provide a welcome distraction from what's taking place on the football field but don't forget it completely because we are taking on Missouri at the end of the week.

Tonight the Jayhawks take on the Georgetown Hoyas and it's another early season test for our new look Kansas Jayhawks. To get a little more insight into the Hoyas we did a Q&A exchange with SB Nation's "Casual Hoya".

We'll do our best to keep this Q&A format going this week but I am going to be squeezing things in between Holiday plans so hopefully the RCT community can carry things a little bit over the next week.

Open thread tonight, open threads ALL WEEK, reaction to what goes down in Maui and of course we'll continue to get ready for the Border War.

In a lot of ways Georgetown and Kansas look pretty similar.  Both teams have a group of upperclassman that are looking like the leaders of the team and then a group below that which is full of lesser known commodities.  How good can Hollis Thompson, Henry Sims and Jason Clark be for the Hoyas in terms of leadership and production?

This is one of the ongoing subplots through the season - can the upperclassmen provide the leadership that was sorely lacking the past few years to push this team to its potential. The first 2 games (against awful opponents) gave us reason for delusion but the last 3 years remind us of our cynicism.

Hollis has been a solid player who surprisingly declared for the NBA Draft before coming back - the fear is that he'll be trying to prove to the pro scouts that he's a 2, when in college, he's really a 3-4. If he can put up 12-15 a game, grab 6 boards, and limit difficult shots, we'd be very pleased.

Henry came to the Hilltop as a highly decorated recruit and has proceeded to disappoint for the past 3 years. By all accounts, he's a great kid, but it's never appeared that he's really serious about hoops. The first 2 games have shown him to be a different player and he's attacked the basket and rebounded really well and a consistent 10 and 5 out of him would really push the Hoyas a long way.

Jason Clark is the player who needs to provide the most leadership. He's been starting for a while now and can impact the game both offensively and defensively with his long arms and solid jump shooting - a consistent 15 points and excellent defense on the other guards will go a long way.

We'll address the freshmen in a different question but their arrival has allowed JT3 to play some more aggressive pressing and trapping defenses, which definitely play to Hollis, Henry, and Jason's strengths

What are the expectations for Georgetown this year in terms of the "three seasons" (Non-Con, Big East, Tourney)?

With such a young team and after losing so much production after the departures of Austin Freeman, Chris Wright and Julian Vaughn, it's hard to burden this team with high expectations. For the non-conference slate, the expectation is to beat the cupcakes and show well in our tough games ( Maui + Memphis and Alabama ). For conference play the expectation is to finish middle of the pack somewhere between 6th and 10th. The expectation for the post season is to win at least a game in the Big East and NCAA tournaments.

What new faces are standing out early on for the Hoyas?

There are five freshmen on this team - Mikael Hopkins, Otto Porter, Greg Whittington, Jabril Trawick, and Tyler Adams.  We expected Porter to be the best of the bunch coming into the season, and thus far, he has been pretty solid and should be a stat stuffer all year.

Depending on what happens with Markel Starks and Henry Sims, he could work his way into the starting lineup at some point.  Whittington has surprised on the upside thus far.  He was a late recruit, and seemed to bloom during his senior year, winning All Met Player of the Year over some very solid competition.  He came out firing during the first game of the season and has shown a smooth three point shooting stroke.  Hopkins and Trawick have made a bigger impact on the defensive end through the first two games, but we expect them to contribute throughout the year on both sides.  Adams is dealing with an ankle sprain, so too early to tell on what his contributions will be, but he sure has been injured enough since he arrived on campus for summer classes.

More than anything, this freshman class provides depth and an attitude that seems to be different than previous years.  By all accounts, they are pushing the upperclassmen in practice and have made it feel like no one's job is safe and you have to play your way into minutes.  Compared to previous years where there were 6-7 contributors and the teams have worn down as the season has progressed, this has been a welcome change.

What is the feeling among the fanbase with regards to realignment?  Does not having a football team make it fairly irrelevant for the most part or is the dismantling and rebuilding of the Big East a frustrating thing to see?

Warning: This is going to be a bitter and angry ramble:

It sucks.  There is no other way to put it.  The current Big East is the most competitive and fun basketball conference to watch in the country and it is being destroyed because the ACC thinks having 14 as opposed to 12 crappy football teams makes them more competitive.  I am a firm believer that realignment does not stop there, and that in 3-5 years we will have one super conference consisting of the 20 best football programs in the country, all existing outside the boundaries of the NCAA.  Today's movers will become tomorrow's losers.  If it is all in the name of money, there is plenty more to be made.

My only hope is that the Big East adds good basketball programs (Temple, Memphis) in addition to football schools (Boise State, BYU).  I would love to play in a basketball-only conference but the money is just not there to support it.  Not until a rival emerges to take on ESPN - who absolutely had a role in shaping the conferences.  Until then, I will hold on to whatever traditions and rivals Georgetown has left and hope the demand for Big East basketball stays strong.  And I dearly hope Syracuse and Pitt go the way of BC and become completely irrelevant after cowardly and surreptitiously changing conferences.

Do you think longterm that the departure of Syracuse and Pitt to the ACC gives that conference the edge in terms of the East Coast Media buzz?  The Big East has always received a huge boost in notoriety because of their prominence in that area of the country and I'm curious of the ACC overtakes that.

The Big East rivalries won't transfer to the ACC without serious energy loss. Syracuse and their fans will want to savagely beat Duke (one of the few area we agree) but they won't gag when they hear reference to JT Jr shutting down the Manley Field House. So there's certainly going to be a dampening of Big East buzz, but the Big East remains (for as long as it exists in that form) the better basketball league from top to bottom. It's easy to overlook solid and improving programs at Marquette and Cincinnati and there's growth from the recent bottom dwellers -- St. John's and Steve Lavin could be the feel good CBB story of the decade if things shake out right and DePaul has some strong young players (I won't put in a good word for Seton Hall because those fans were downright obnoxious during the Kyle Anderson saga so I'm ok with SH languishing in the BE basement for eternity).

As for Georgetown personally, it's in our hands whether we can stay a basketball power and remain a cornerstone of an elite conference. As JT3 said over the summer, our facilities aren't even up to par for a CAA school. Hopefully this talented young core can win over enough deep-pocketed alumni to realize Georgetown is going to have to fortify its basketball tradition because ever team is looking out for themselves.

Is John Thompson III invincible?  And has he done enough for Georgetown since taking over.  He's had some great teams but it feels like other Big East teams tend to steal the spotlight.

He's definitely not invincible, but he's damn near close. He has taken us from the depths of irrelevance and put us in the top 25 discussion consistently.  Not to mention, we've been to a Final Four, been in three Big East Tournament championship games, won two Big East regular season titles, and won a Big East Tournament title.  He has run the program flawlessly from NCAA standards, graduated kids, and avoided any scandals.  He has continually brought in strong recruiting classes and produced NBA players all with horrific facilities and not much support from the administration.

Obviously, there are times we, as all fans, get frustrated with the program.  Specifically, there have been a boatload of transfers since JT3 began and we've had some serious flameouts in the NCAA Tournament the past four years.  But all in, he's doing an awesome job and we can't even get close to imagining someone else at the helm who could have done the job he has done.

Thoughts on the game for Monday?

I'm excited for the game for a couple of reasons: 1) As a Georgetown fan I'm looking forward to seeing how the young Hoyas will react in what is their first real test, and 2) As a college hoops fan it doesn't get much better than Georgetown against Kansas.  I was impressed with how the Jayhawks hung in there against Kentucky last week, and I think this game will come down to Georgetown's ability to contain Tyshawn Taylor.  If Taylor is able to penetrate and create good looks inside for Robinson et al, the Hoyas could be in trouble.

I think, however, that JT3 is going to throw Starks, Clark and Trawick at Taylor at different points in the game, and Georgetown's length on the perimeter will cause Kansas problems.  As a final score I'm going Hoyas 72-Kansas 67 in a fun game between two of college basketball's best programs.