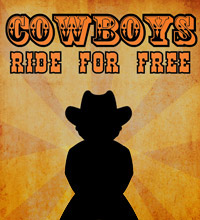 Stillwater Oklahoma! HOME of the Oklahoma State T BOONE PICKENSes.  Yep that's where we're headed this week for the Kansas Jayhawks fifth game of the season.

So, just as we do every week we're sitting down with our SB Nation compadre to discuss this weeks game.  Of course as we get further into the season it's always nice to digress into other topics.  Things such as, who will win the Big 12?  What is going on in conference realignment and WHO THE HELL IS T. Boone Pickens anyway?

Special thanks to Sam over at Cowboys Ride for Free for weighing in and if anyone is curious about my Q&A feel free to visit them and check it out!

Oklahoma State is obviously known for their offensive attack year after year and with Weeden and Blackmon returning 2011 is no exception.  Kansas is borderline the worst defensive team in the country right now.

Do you expect Gundy and the Cowboys to go all out and try to hang 70 on us?  Is there any chance we slow down the Cowboys?  I guess what I'm getting at is that Kansas is now 4-0 if you take the over, last week it was 67 in the Tech game.  Let's say it's 80, should I take it?

I wouldn't take over 76 or so. This offense explodes even if it isn't totally clicking against bad defenses. However, Kansas does have something that can slow the Pokes down, a running game.  At 236 ypg and a decent TOP advantage, keeping the Cowboy offense off the field is a solid way to slow it down. Outside of that, the main key is to get pressure on Weeden. A&M was able to in the first half and it threw everything out of rhythm.

Joseph Randle is a name that is familiar to Jayhawk fans and a player that we missed out on during the transition to Gill.  The Kansas backfield is probably a strength so it all worked out in the end, but he's obviously playing a big role in Stillwater.  What is it about him or Oklahoma State that has made him so productive?

Obviously he is fast, makes good reads, and can cut well, but in my opinion the two things that make Randle great are how hard he hits the line, and his abilities as a receiver. I don't know if there is a way to measure how much momentum a back has when they cross the LOS, but if there were Randle's stats would be off the charts.  He rarely side or sutter steps in the backfield, he finds his opening and hits it quick.

Take away the known weapons and who or what would you say is the biggest lesser known strength when looking at the Cowboys offense?

I would say the complementary receivers. Weeden has completed passes to at least 10 WR's in every game this season, and against A&M 3 different WRs had double digit receptions. Between Cooper, Anyiam, Moore, Horton, Chelf, Stewart and a host of other WR's and RB's there is just a lot of talent out in the pattern and it is impossible to account for everyone.

Let's flip to defense.  That seems to be the question with the Cowboys yet they always seem to do just enough to get it done.  How would you attack and what are the weaknesses that a team might exploit to keep pace with the Cowboy offense?

This one works right into Kansas' strength.... keep the ball.  While the Cowboy defense does give up a lot of yards, they haven't given up a ton of points and tend to force a bunch of turnovers.  If an offense plays straight up, controls the ball and the clock, and keeps grinding for 4 yards a play the Cowboy defense will tire and start opening up. In a way, the biggest strength of the Cowboy defense is the Cowboy offense as opposing teams tend to want to shoot it out with us, end up making mistakes, and this defense is really good at capitalizing on mistakes.

Currently they sit at 104th in overall defense, what would you attribute that to and who or what can change the fortunes of the Cowboy defense?

While the defense isn't world class, it isn't as bad as total yards would suggest either. There have been a lot of yards and points given up to the 2nd and 3rd team defenses in the blowout wins, and with that fast paced offense Cowboy games run at a much faster tempo than a normal game giving the opposing team more opportunities to gain yards and score points.  In most stats that are adjusted to remove garbage time and pace of play, the Cowboy defense rates closer to 40th or 50th.  Again, not great, but not as bad as the total yards look.

Bedlam is looking like the stage that will determine the Big 12 title.  Which game scares you the most between now and then and how confident would you be heading into the final weekend if both OU and OSU are undefeated?

The way Texas is playing it has to either be our road game there, or possibly the road game in Missouri.  Both of those teams have been hit and miss, but I don't like playing either on the road. As for Bedlam, at least we have OU at home, although that hasn't helped much the past 8 years or so. I think I would be cautiously optimistic heading into Bedlam.  We have the horses to play with them, but there are decades of bad memories that make it tough to be completely confident in a Cowboy win.

T. Boone Pickens?  Does he have an official title with the University? How rich is he?  Every time I turn around he's being quoted and interviewed about the Big 12 and realignment, but I always thought he was just a major donor?

His official title is "I gave you half a billion dollars so I'm going to do what I want around here".  The nameplate on his desk is huge.

As for the game Saturday, how do you see it playing out?.....I'm cringing as I await this answer.

I think the 33 point line is about right.  I would envision a 40 point lead or so heading into the 4th where OSU will rest the starters and end up with something like a 55-24 win.