My Road To Apathy, And Why It Is Time To Fire Turner Gill

Share All sharing options for: My Road To Apathy, And Why It Is Time To Fire Turner Gill

For some reason, I keep coming back to the 2006 season. No, not the 2007 season, and our glorious Orange Bowl run. 2006, an extremely quirky KU football campaign that got lost in the aftermath of the Orange Bowl and the 2009 meltdown. What does this current debacle of a football program have to do with a 6-6 campaign five years ago? Good question. It will all make sense… in a minute.

Let’s go back in time to 2006, my junior year in school. Kansas is fresh off a solid 7-5 season and looks to be a team on the rise. While young, Kansas has some playmakers on both sides of the ball and is blessed with an easy schedule. Then… well they play like a young team. Kansas blows an overtime game at Toledo they had wrapped up (the Jayhawks held the Rockets scoreless on their OT possession, only to fumble on theirs when a field goal would have won it). Kansas rebounds with a solid win over South Florida, only to watch things unravel. The Jayhawks blow close game after close game in the fourth quarter, a 20-7 lead over Texas A&M, a triple score lead over Baylor. A 17-0 lead over Oklahoma State isn’t enough. While a young freshman named Todd Reesing would ultimately save the season and lead Kansas to a win over Colorado (and the Jayhawks later creamed helpless Kansas State and Iowa State), we were all left wondering what might have been.

While that season seems to get lost in the memory of many Jayhawk fans, it has always stuck with me. Why? I remember the pain, the meltdowns, and the collapses. It was terrible. I was pissed. I even started openly questioning if Mark Mangino had taken the team as far as he could (which, given what happened the following season, was pretty stupid).

One memory stands out above the rest. The Kansas-Baylor game wasn’t on TV, so my friend Mark and I sat in his car and listened to it on the radio. Baylor would score three fourth quarter touchdowns and beat Kansas by a point. We just sat there, stunned. I was speechless. I just remember sitting there, wondering what the hell had just happened. 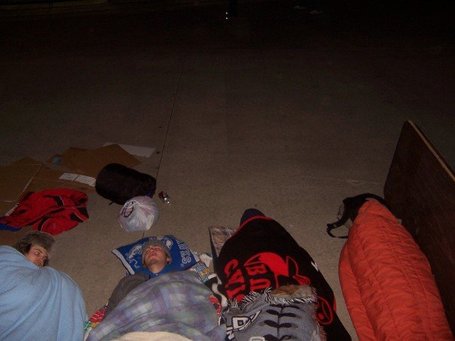 My friends and I sleeping outside Memorial before the KU-KState game in 2006. We slept outside in November to make sure we were the first ones in the stadium (to get front row seats). As you can tell by my face (I'm in the middle), it wasn't very pleasant.

Fast forward to today. After watching our instate rival, a team we beat three years in a row while I was in school, paste us on our home field for the second strait year… shouldn’t I feel the same?

And that is the sad thing about this whole mess. I don’t feel like I did in 2006. I’m not screaming at the TV anymore, I’m not angry about any of it. I’ve been pushed to a level no fan wants to experience: I just don’t care. As long as Turner Gill and his staff coach this team, I can’t care anymore. Watching my Alma Mater get destroyed every week has officially pushed me past the edge. In 2006, I was sitting in a car to listen to KU blow a huge fourth quarter on the radio. In 2011, I’m watching something else by halftime.

Kansas football is in a dangerous place. We don’t have the tradition and success of other programs. When most fans finally bought in before the 2009 season, we lost seven straight games, missed a bowl and lost our coach. People are moving from angry to apathetic. Trust me, the later is much more dangerous. For this reason, for the lack of utter feeling I have now when I watch KU play, I’m advocating change. The Turner Gill experiment has failed. I want to care again. I want to feel something for Kansas football again, even if it’s the pain of another blown lead. Dr. Zenger, do it for me. Please. Give me, and other Kansas fans, a reason to care again. Before it’s too late.