Share All sharing options for: Kansas Basketball 50 in 50, No. 11: How Much Does A Bench Matter?

50 in 50 is a feature here at RCT counting down until the Jayhawks kick off the 2011 basketball season on November first. Got an idea for something you'd like to see featured here? tweet @rockchalktalk or @fetch9 or email me at fetch9 at gmail dot com.

Obviously the main talk about the 2012 Jayhawks is that they are a talented group, but a pretty thin group. Without a ton of experienced players, Bill Self will probably have to shorten his bench up and perhaps give more minutes to his starters.

The question then is, how much will this affect KU's performance this year, if we can even determine whether it will or not?

I chose only to go with conference winning percentage for two reasons: first, most teams have their rotations set by then and I'd rather not have the statistical noise of early season figuring out a rotation. For example, HCBS usually plays a few more guys in the non conference before settling on eight or so for the rest of the season, and I'd rather focus on those minutes. The second reason is that it is less data to enter and I am lazy.

I debated whether to do this year by year or to just jam them all into one spreadsheet, finally deciding to group them all together because it helps eliminate the small sample size problem. 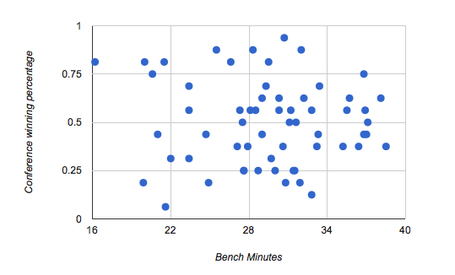 You can probably tell what the correlation is just from looking at the picture, but to see it written out:

correlation: -.0623, meaning it basically means nothing. So I potentially wasted a ton of my time. Yay.

For argument's sake, how Kansas has performed based on their bench minutes is after the jump: 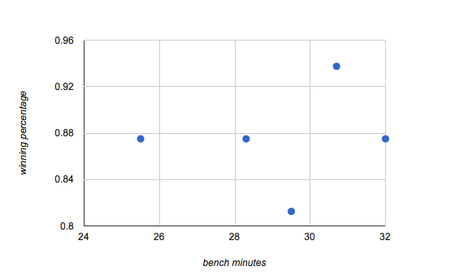 So yeah, thanks for letting me waste a bunch of your time by reading this to find out that bench minutes (in this sample anyways) don't really matter. Which I suppose is good news for the Jayhawks this year, but I would obviously rather err on the side of having too much depth.