Kansas Opponent Talk with Kansas State's "Bring on the Cats"

Share All sharing options for: Kansas Opponent Talk with Kansas State's "Bring on the Cats" 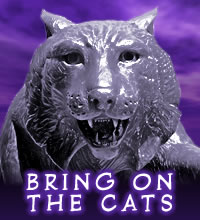 You know the drill and you know the site.  BOTC represents Kansas State for SBNation so we're talking with TB the manager of BOTC and of course I'll be returning the favor.

This game has taken a turn in the bast few years.  Bill Snyder is back, Kansas State is somehow exceeding expectations and we all know the story with our own Jayhawks.  With that in mind we're talking Bill Snyder and K-State turnaround #2.  What can we expect from the Wildcat defense? How can the Kansas State offense look so pedestrian on paper yet play so effectively?  And of course, how TB sees this one shaking out on Saturday.

Bill Snyder?  Seriously how? Not that I thought K-State would be a bad team this year but surely the Wildcats are exceeding expectations in Manhattan.  How does he do it on a consistent basis?  The JUCO talent provided a nice boost to the defense. Colin Klein is getting it done just enough on offense.  What is it? His scheme? Staff?  I have to admit I'm impressed by the old man.

Even the most optimistic fans didn't expect this start. Everyone had a loss to either Miami, or Baylor, or Missouri, or Texas Tech, or some combination thereof. And after the near-debacle against Eastern Kentucky, even more people were skeptical. I thought a 6-6 season would be a solid accomplishment; I never thought we'd ensure that was the floor only six games into the season.

Snyder has always advocated a "get a little better every day" approach. It sounds simple, but it's really not. He wants to make sure his team gets a little better, practice by practice, game by game, year by year. When the players start to see the results, they buy in even more and the momentum builds. His staff this year isn't the most impressive bunch ever, but Charlie Dickey seems to be a very good offensive line coach, and Dana Dimel, while a washout as a head coach, is proving he can team with Del Miller and Snyder to coordinate an effective offense.

Defensively, Chris Cosh is proving that with more-talented players, he can field a unit that passes as competent. And yes, never forget about the scheme. The Scheme Doctor will see you now, to scheme a way to solve your scheme problems. /BobDavieGoesOverboardWithSchemeDoctorMeme

Kansas has been a decent offensive team although they struggled last week in their first major test against a top tier defense. Kansas State fields a defense that is pretty stout against the run and still good, but to a slightly lesser extent against the pass.  That is a concern from a matchup standpoint for Kansas fans.  Do you think there is an opportunity to attack the Wildcats by running the ball or will Snyder force Jordan Webb to win this one?

From the very little I've seen, KU has shown it can move the ball on offense. However, it's also shown that Jordan Webb will probably throw the ball to the other team a couple times per game, if given the opportunity. K-State's defense has made a living on picks this year. My guess is K-State would prefer to make Webb be the one who has to make plays to win this game. For KU's sake, it had better hope that means putting eight in the box to stop the run, because if K-State can stop the run without committing an extra defender to it, Webb is probably going to have a pretty miserable day. He should have the privilege of meeting Mr. Arthur Brown, however, so he's got that going for him. Which is nice.

Obviously you are probably well aware of the Jayhawk defensive struggles.  Last week Kansas at least had some fire, forced some turnovers and made some stops against a very strong OU offense.  This week Kansas gets a much different look with a very deliberate Kansas State offense.  If you're Vic Shealy, who are you trying to stop on the Wildcat offense?

It has to be maddening to be a defensive coordinator preparing for K-State. You look at the offense, and what do you see? A quarterback who isn't slow, but isn't fast, and isn't a terrible passer, but doesn't really scare you with his arm, either. A 5'8", 185# running back who doesn't have breakaway speed. A bunch of receivers who are excellent blockers and average pass receivers. You look at that and think "this shouldn't be too difficult to figure out." And then, during the game, you force a few three-and-outs. Sure, you give up a nice, sustained drive or two, but on the whole you're limiting the offense to less than 350 yards for the game. And then you look at the scoreboard and find out you lost.

What I'm getting at is that even though K-State's offense has nobody you really fear, you can't really just focus on taking one player away. If you're KU, you have to find a way to slow down K-State's rushing attack with a defense that's on its way to being historically bad against the run. Texas Tech provided at least a partial blueprint last week, but you know the Scheme Doctor is going to have something cooked up for KU.

Talk a little more about the Kansas State defense.  Arthur Brown is the name that gets tossed around a lot but that front four seems to be a big part of the success.  What do they do well as a unit that has helped K-State to a 6-0 record.

One of the biggest components is the improved play of the defensive line. Ray Kibble was just named a midseason all-America by Phil Steele, and Vai Lutui, Adam Davis and Jordan Voelker have been pleasant surprises, too. It's the improved play of the defensive line that has slowed opposing rushing attacks and put pressure on quarterbacks in a way we didn't see last year. Obviously, the improved speed at linebacker and solid secondary play from David Garrett and Nigel Malone get the headlines, but having a competent line is invaluable.

Give me the rundown on how you see this one playing out.

K-State fans expecting a walkover from start to finish are probably going to be in for some nervous moments in the first half. No offense, but other than the Missouri game, KU really doesn't have anything left to validate its season besides beating K-State, and I expect the Jayhawks to come out firing. But from what I've seen, KU seems to play with a sense that the other shoe is about to drop, and at the first sign of things going downhill, they lose confidence and things start to get out of hand quickly. I expect this game to be fairly close going into halftime, with K-State holding something like a 17-14 advantage. In the second half, K-State's running game should wear down KU's defense and pave the way to a comfortable victory. Nothing like last year's debacle, but something along the lines of a 38-21 victory for K-State.