Kansas vs. Colorado: A Recap From Press Row

Share All sharing options for: Kansas vs. Colorado: A Recap From Press Row

Most of you probably know already but last night I had the opportunity to sit "near" courtside for Kansas vs. Colorado on a press pass issued to us here at Rock Chalk Talk.  Not a bad deal.  I've done a live event as part of my Rush The Court responsibilities a couple of times, but this was my team and well it was for RCT which made it a little bit more exciting.

Ideally I would have liked to set up the computer and do a little live blogging on the night, but with Alec Burks, Cory Higgins, the Morris Twins, Josh Selby and Kansas in town, the place was jam packed.   The normal press seating is limited so there were two overflow sections one of which I sat it.

A fun night, a few observations and I might have the chance to do another little something special this coming Saturday as well.  Anyway, back to the "diary" if you will from press row.

Obviously the biggest benefit of press row is the access.  You walk in, you get your pass and you go almost anywhere you want. Check in at the media room, grab game notes, rosters, Big 12 media kits, and for those stat lovers out there it's just about everything you could want.

I've met the CU media contact previously and talking to him he mentioned 23 NBA teams, with 39 representatives.  Checking the list I see a familiar name to Jayhawk fans, RC Buford.  I'm informed that this is a record for a Colorado game and that they've had to set up a couple of overflow sections for media.  No problem for me, I'll still be watching Kansas.

I head over to my seat well before the doors are open and it's just me and another Denver based "fan site" along with most of the NBA scouts.  Should be interesting and it was.  More on that later.

I figured I'd take a walk and see who else is here.  I notice Jesse Newell's up where I've sat before, why not go say hi.  It was nice talking to him, getting his take on Kansas football especially and he even dropped a little props to Fetch and Warden for their help around here which I'd echo as well. 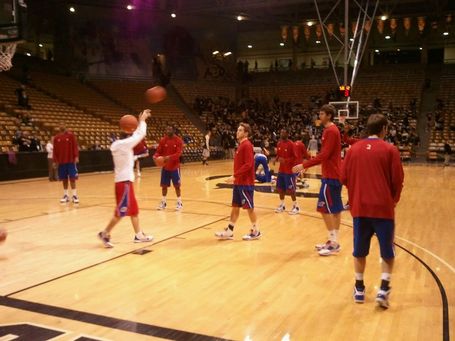 Kansas arrives, the doors open and the CU students start filling the end underneath their basket.  I'll say that this is the only time in my six years going to the game that CU has had students waiting in line to get in. This game meant a lot to Colorado students and fans and I have to say, I'm glad we pulled it out.

On the opposite side; Jayhawk fans.  At the start it looked like a poorly attended bowl game with all the fans under one basket wearing black and all the fans under the other wearing blue.  It was early but when the Jayhawks took the court Kansas fans were loud and represented just as well early as the Colorado fans did.

The 90 minutes from door open to tip went by in a hurry and after settling into my seat at just 6' tall surrounded by 6'4"-6'8" NBA scouts I felt a little out of place.

CU set up for the National Anthem, not nearly as good as Bensa's, and in a nice gesture acknowledged the loss that Kansas experienced this week.  It was actually a very extensive explanation in my mind even explaining that Robinson had gone home and would not be playing in order to be with his 9 year old sister.  I thought it was a great thing to do in this farewell game and showed a lot of class on the CU basketball programs part.

So What To Make Of An NBA Scout

I'm going to track back just a minute because this honestly might have been the most interesting part of the night.  Sitting in the midst of 15-20 NBA scouts was truly fascinating.  I guess you envision things a little different from the outside, but this was truly like a family reunion before the game.

Back and forth about what hotel they are staying at, cheap flights, who's playing well and where they are all of to next.  I'd describe it a little like what I envision a traveling carnival to feel like.

I struck up a few conversations one regarding Nick Collison who several scouts mentioned they wished their team would have tried to pick him up.  Talked some Big 12 basketball and I asked the question Marcus or Markieff?

Now this is where scouts aren't so "chatty".  This question got me a whole lot of generalities and one scout deflecting the question to another to get his take, which would really end up being more of nothing.

That same sort of closed off attitude kicked in right at tip.  When you're on a press pass, you're expected to stay neutral. Imagine my difficulty.  That was helped tremendously by the fact that I'm surrounded by 15 giants who are taking notes and emailing from their blackberries the entire game.  They stood up when things got interesting, but for the most part it's an island lacking emotion in a building that was full of it.

A couple comments during the game that absolutely stood out to me.  After Selby's 3rd maybe 4th three pointer a scout leans over to me and asks:

Where's he been for the last month?

The second one was late in the game when Markieff got a rebound and was pushed to the ground and called for a travel.  One scout looks at another and comments.

Big 12 refs just don't like those Morris twins, they can't get a call.

Now personally I think that the Morris twins rapport with officials has improved and I think they are getting more calls but I found it interesting that a scout who isn't directly involved had an opinion that many Kansas fans might share.

All in all it was pretty fascinating to sit and watch and as soon as Marcus hit his second free throw to put Kansas up four with 16 to go, they vanished into thin air and exited the arena before the final horn sounded.  They've got it down to a science and it's fun to watch.

If you watched it I don't probably have much more to expound upon other than the atmosphere.  From a gameplay standpoint it was great to see Kansas hit shots.  It was also frightening how well Colorado was shooting with a 70% three point effort on the night.

Sitting in the stands I never really felt like we were going to lose.  We were the better team and while they were doing enough to hang around, they never were able to stop us on the offensive end to truly shift the tide.

From the start CU fans wanted this one bad.  Grad made the statement that they built this one up in their minds enough to rival K-State fans and that might be close to true.  I've been to six of these, and this is the most passion I've seen from Buff basketball fans ever.

I'd put the crowd at 60/40 CU.  Kansas fans were just as loud when they chose to be, but in general Kansas fans seem to ride a steadier stream of emotions while the Colorado crowd was up and down all night long.

One thing I think is a horrible idea and to my knowledge Allen Fieldhouse doesn't do this, but that's courtside seats at a college game.  NBA players are paid millions of dollars to deal with abuse, but courtside about three rows up from me were a pair a fairly well built bald headed gentleman that looked like twins.  Probably could've played tight end at Colorado at some point.  I'm not exaggerating when I say these two were absolutely relentless on any and every Kansas player that came into their corner.  After a timeout Selby was in the corner and they're both just laying it on.  I didn't hear what was said, but Selby talked back and you could tell whatever it was it bothered him.  In my opinion college athletes shouldn't have to deal with that.

Back to the game and a player that we've talked an aweful lot about lately in Tyshawn Taylor.  I haven't jumped in enough to the thread to see what the thoughts were on his performance but I can tell you that reading Bill Self's body language and listening to him, coach was happy with the way he was handling business.  In fact, I'd say real happy.  Other than a few defensive lapses and leaving his feat on that late charge, I think the perception is that Tyshawn is understanding his role and buying in on defense.  A good sign in my mind.

Other than that, you watched the game so I'll let you draw your conclusions.  I thought the confidence was high for the team and while Tyrel Reed said in the postgame that he thought the team needed more energy, I didn't think it looked all that bad.

After Colorado's players sing the Alma Mater with their fans the group files out.  Kansas fans get a faint Rock Chalk Chant in during those final moments but it's much more subdued that in some years when it was able to kick off at about the 10 minute mark in Boulder.

Kansas fans start holding up signs like "CU Later" or "I'd leave to if I couldn't win".  Yes we all know they're leaving and we wanted a win but Colorado fans were HUNGRY for this one, they didn't get it and they weren't to happy about it.  Let's just say that those types of signs were not met with a very friendly farewell.

Both teams do a postgame.  CU holds theirs in a room upstairs, Kansas holds theirs in the hall outside the lockeroom.  It's cramped, it's loud and in short, the audio I got wasn't the best and I think it was compounded by what seemed to be a lost voice for coach.  That or he's under the weather.

Either way, I did stick around and listen to Bill Self first.  In one of those mass huddles around coach he talked about Brady getting on track, Selby playing well and in general he felt the team played smart.

He wasn't happy with the defensive effort on Burks basically saying that he "drove right past us, all of us".

Self then went on to address several questions on Robinson.  Friday night was devastating last week which we've been told before.  He outlined the teams plans in the coming days.  Self also touched on the NCAA's support on this and how there have been virtually zero obstacles or hurdles and more than anything the NCAA has made things extremely easy on Robinson and worked directly with Kansas to make sure the situation is handled appropriately.

Next four players entered the hall.  Tyrel Reed, Brady Morningstar, Josh Selby and Marcus Morris.  Marcus was on the phone with Robinson when he first walked out and in general you could sense that this was a team still very much dealing with things.

Reed deflected praise at Brady.  Brady deflected praise to Selby and Selby talked about his injury.  It's all very fast paced, very controlled and the players head off to say hello to the family contingent before jumping in a bus on the way to the airport.

So there you have it.  My evening in a nutshell.  I definitely enjoyed my final trip to Boulder to watch Kansas.  It was a unique experience and maybe someday down the line Tad Boyle and Bill Self will work a little home and home series to help out a few Denver Jayhawks, but I'm not holding my breath.