As move on from this game and look at the bigger picture heading forward, the plus/minus shows what we already knew about the team but also might highlight those flaws a little more than we realized previously.  We know the team is dependent on Marcus and Markieff Morris.  We know Josh Selby has struggled since his first 5 games.  Hopefully everyone has also realized just how valuable Tyrel Reed has been.  Speaking of Reed, I heard yesterday that this was the first home game Tyrel Reed has lost in his basketball career.  His Burlington team never lost in middle school and lost one game at home in high school, a game he didn't play.  If true, interesting.

As for the Texas game, this was about as poor of a "team" performance as it gets.  The Jayhawks had four guys end up with a positive number, four who recorded zeros, and two in the negative.  For a team, that's just bad but it shouldn't surprise those who watched the game and are familiar with the formula I use.  Missed shots and fouls are bad, Kansas had a lot of each.  Texas on the other hand had six guys in the positive and four at +9 or better.

Click the jump for the KU/UT chart and a look at just how reliant the Jayhawks have become on the Morri.

Nothing groundbreaking here but I wanted to share these numbers before looking at the team's last few games.  One thing I think we all know is that when Reed and Morningstar are the team leaders in the plus/minus, Kansas had a rough day.  In the game thread, KGRTC asked if Releford would have made a difference in this game and my immediate response was no.  However, looking at this I have definitely changed my mind.  It wouldn't have taken much to be better than Johnson and Selby, throw in Releford's defense and I think he could have altered the outcome. 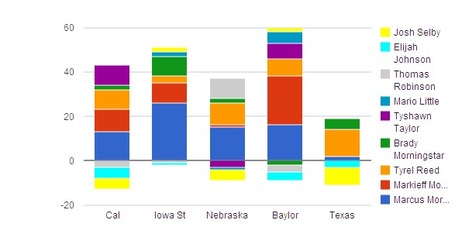 Looking at the team's production since the Michigan game highlights the team's need for another player.  For a team that prided itself on depth early in the year, it has disappeared the last five games.  The Jayhawks have been carried by the Morri and Reed.  That's not a huge problem, lots of teams would love to have three guys like that to count on.  But when nobody else is coming close to consistency, it creates a problem when there's an off game by one of the leaders.

In the end, two things are keeping my hopes up for this being an elite team as we get into conference play and March.  First, Thomas Robinson has had one good game over the last five.  The guy has been through more in the last month than most people face in years, so in no way am I calling him out.  Just saying that as time goes on, he might become a little more stable as a contributor.  Second, Travis Releford being out with injury has limited the guards available.  He has shown a strong outside shot and good defense, once he joins the team and gets back in the flow everything is going to be better.  Until then, be ready for a few more bumps.