Texas celebrated the announcement of their own network last night by thoroughly stomping a pretty good Texas A&M squad.  The Longhorns jumped out a big lead and kept the Aggies at arm's length the rest of the night.  Going from memory, I think A&M cut the lead to 5 at one point in the first half but watching the game it never felt like they were in the game.  Texas was too good on both ends of the court.  Offensively, they scored 1.4 points per possession and had a 62% eFG.  A&M ended up scoring 1.03 ppp, that number shocked me because I don't remember being impressed by them on the offensive end one time last night.

Athletically I haven't seen a more impressive team this year.  Rick Barnes has found a group of guys that are around six and a half feet tall but play like they're 6'3''.  On the offensive end, they took care of the ball and let their scorers do the work.  Tristan Thompson and Jordan Hamilton took over 50% of the shots for Texas and combined for 45 of their 81 points.  Only 6 players even scored a point for Texas and instead of looking like a team that has no depth, they impressed me because they went to the well repeatedly.  Hamilton had an offensive rating of 151, Thompson had a 139 O-rating, and Gary Johnson had an O-rating of 180.  Texas A&M's not a defensive juggernaut but they're much better than Texas made them look last night.

Using what we saw, I think there are a few things the Jayhawks can do on Saturday to cause a few more problems for Texas.  Below the jump, I've got a few sets that Texas ran and their shot chart from the first 30 minutes.  Lets play "coach" and see what we can come up with. 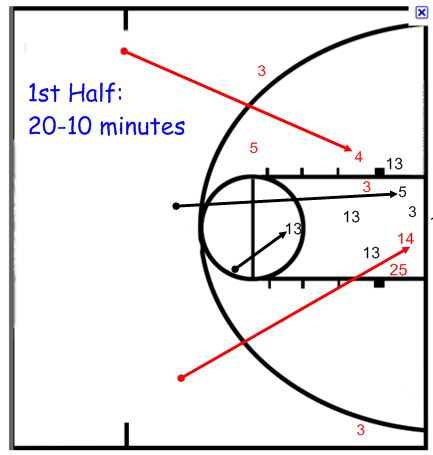 In the charts, the line is showing dribble penetration by the shooter.  Texas opens up by just repeatedly passing inside and getting good looks.  The two main things I see here are only two shots outside the 3 pt line and that when Thompson gets the ball in the paint, he's good. 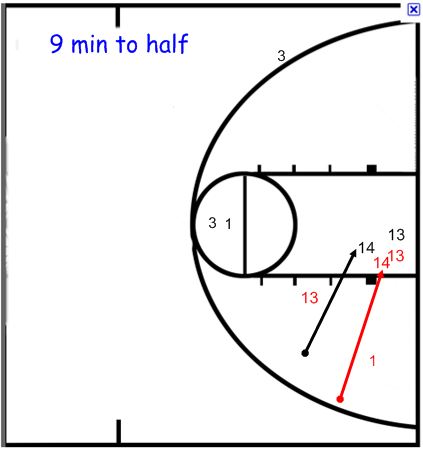 The end of the half shot chart looks pretty barren.  Thanks to Texas pounding the ball inside and attacking the basket, A&M was in all kinds of foul trouble and they live at the line.  Enough calls went UT's way that Turgeon earned himself a technical after telling the refs "this is bull sh**. 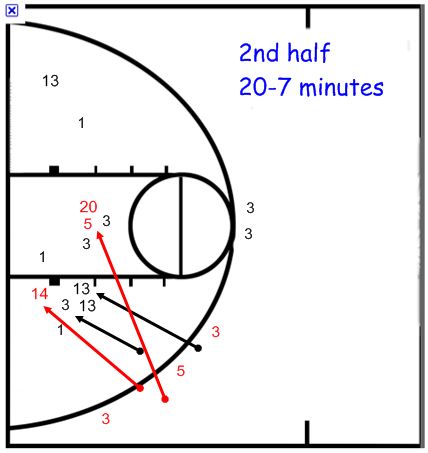 Starting the 2nd half, Texas kept with the same plan of letting Hamilton and Thompson control the game.  One thing that does stand out a little bit is that in the last 10 minutes of the first half and the first part of the second half, Texas did use only half of the court for the majority of their offense.  They used both the right and left side, so it was probably more of what was open than a strong tendency.  I haven't watched enough of them this year to know if this is a pattern, anyone?

Moving on, lets look at a few sets they ran against the Aggies. 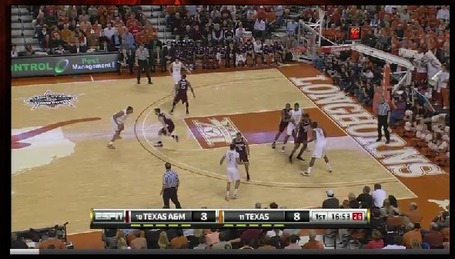 This is early in the first half and leads an open look for Thompson.  As Thompson sets a screen, his man steps up to interrupt the cutter. 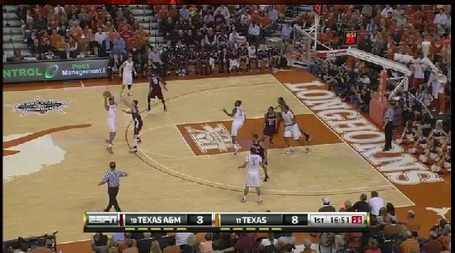 After Thompson's man steps toward the high side, the Longhorns recognize this and swing the ball while Thompson seals his man. 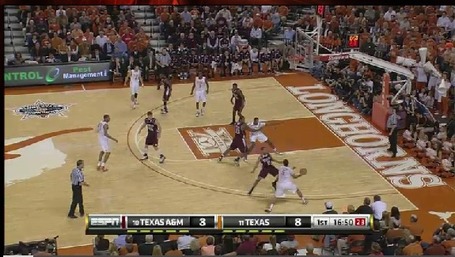 And a good entry pass leads to an easy two for Texas because the weak-side help doesn't recognize the situation and is too slow in their rotation.  Two things really impress me with this play.  First, the spacing is perfect.  The guards are at the 3 pt line, not 6 feet behind it.  This is just enough to create a threat and forces the defense to play a little more honest.  The second is the timing, the pass to the wing right when the Texas player ends his cut across the paint keeps his defender from camping in the lane.

One more clip of their offense below and it's only used to highlight their spacing again and to point out something Kansas must do if they want to slow down UT's offense. 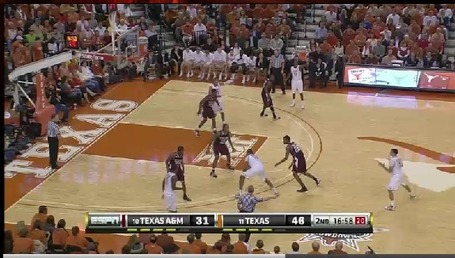 Texas has all but one player outside the 3 pt line and their guy inside is moving away from the basket.  For the Aggies, this is another clip that Turgeon can use to point out bad halfcourt defense to his guys.  The weak-side guard is too far out, the guard on the ballside wing is too close to his man and allows Thompson to dribble right by him to the block.  There's just no way to help when everyone is this spread out, credit to Barnes for getting the defense in this position.

Compare that picture and the first one above showing A&M's defense to what Texas did on their end. 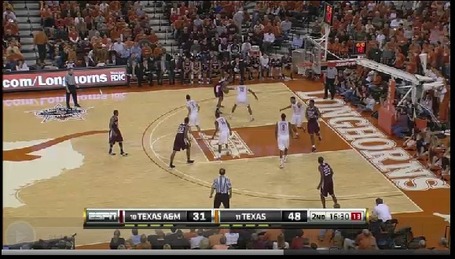 The ball's on the wing and all of the Longhorns are in great position to help in the case of dribble penetration.  Texas doesn't do anything special on defense, they just pressure the ball and help everywhere else.  Hitting a few threes early will be a key in stretching them out and opening up the paint for the bigs.