In the initial post looking at clips from the games, someone asked about taking a look at inbounds plays.  The thinking was that Kansas seems to just get the ball in play and then run offense instead of running something that gets a good look right away.  A couple of important things to think about when talking about inbounds plays.  The offense is basically playing 4 on 5 because a guy is stuck out of bounds.  The defense can either put a lot of pressure on the passer or have the man face the court and help against cutters moving toward the basket.

Because of that disadvantage, the inbounds play that leads to a layup is pretty rare in college basketball.  It will happen occasionally when a guy has a brainfart and allows himself to get picked or the help guy falls asleep.  For that reason, teams tend to focus on the action after the initial pass to get a good look.  That's what we see Kansas do in one of the plays below. 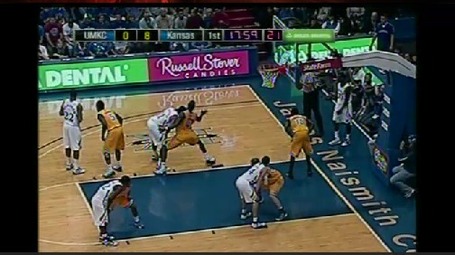 This play is designed to get Kieff open on the weak side block but it doesn't work that way here.  Kieff will be setting a screenfor his brother to go to the corner, forcing the guy guarding Kieff to at least think about helping.

Below the jump, we'll see this play unfold and take a look at a second play for Kansas. 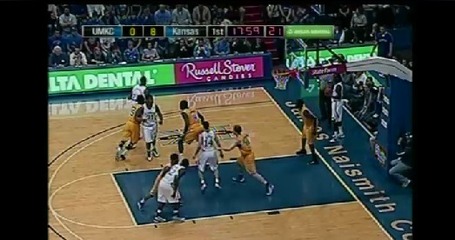 Here we see Kieff come up and McMorris head to the corner while Reed crosses the lane to set a back pick for Kieff to go to the block.  If Reed's man helps on Kieff, Reed will be open coming around the lane.  If he doesn't help, Kieff gets a great look.  Selby is just kind of filler on this play as he heads to the corner.  If his guy cheats in the lane to help, Taylor can hit him for a pretty good look at a 3 pointer. 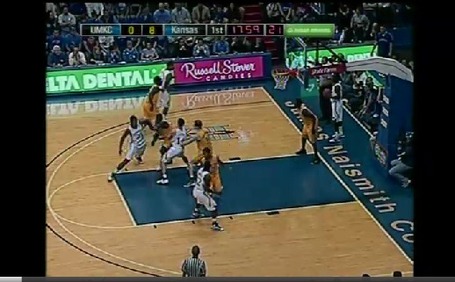 Reed sets the screen on Kieff's guy and we can see Reed's man begin to open up and help in the lane.  After this, Reed moves toward the baseline.  Selby should probably be in the corner at this point, right now he's allowing his man to clog up the paint and I have a hard time believing that's intentional. 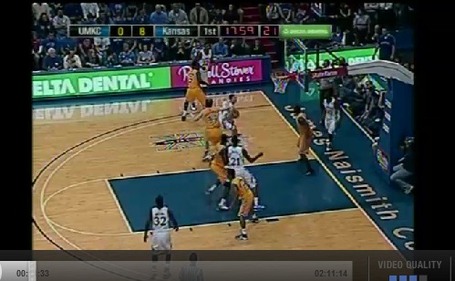 Because Reed's man helped off, he's the one open.  Personally, I can't figure out why Reed and McMorris aren't switched.  Reed going to the corner would draw attention and if this play works as it did, McMorris would have the ball on the block.  Seems like a better situation all around unless Bill Self wants to make this screen a big vs little to discourage switching.

This play starts in the same "box" set.  This play isn't designed for a great look after the inbounds play but develops after two passes. 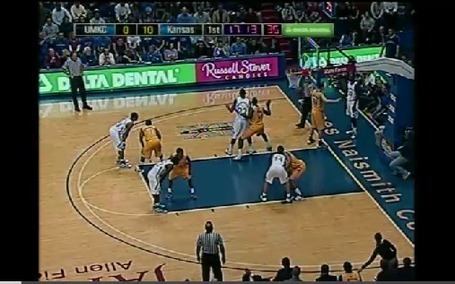 Travis Releford's in for Kieff at this point in the game, so he's at the elbow and McMorris is on the ball side block. 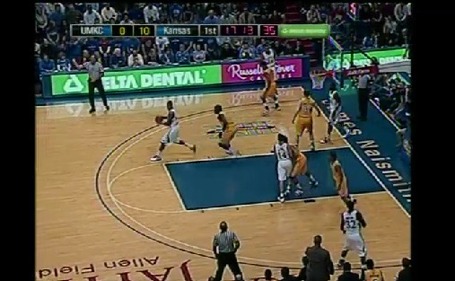 This play starts with the same action as the previous one, Releford to corner, Selby slides to corner, and Marcus moves towards the elbow.  As Taylor steps in, the offense is in great position to run a little bit of the flex offense, mainly the flex cut and downscreen. 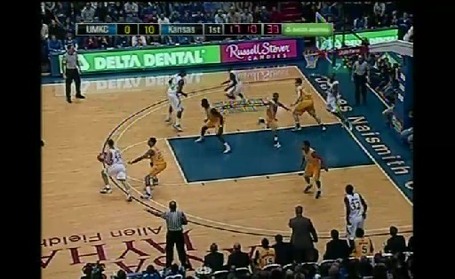 McMorris reverses the ball to the opposite side after Reed moves up the lane and Releford makes the flex cut along the baseline, drawing a foul on this play.  This play forces the man guarding Taylor to help in the paint against the cutter, creating an ideal situation for a downscreen.  As McMorris comes down and Taylor moves up, he gets a wide open look at the basket.