Checking In On The Kansas Jayhawks: Non-Conference Player Review

Share All sharing options for: Checking In On The Kansas Jayhawks: Non-Conference Player Review

As we move into the conference schedule, it's time to take one last look back to the non-conference. On Tuesday I took a look at our offense overall and tried to determine which of the four factors drives our offense the most.

Today we get a little more granular and look at which players are most responsible for driving our success. To do this we are going to break out one of the most handy tools in the toolbox: the scatter plot. Below the jump I have a scatter plot of our roster and each player's offensive rating and percentage of possessions used. To paraphrase from KenPom, offensive rating is a formula developed by Dean Oliver that measures how many points a player produces per possession. It is a super complicated formula, and you would have to read the Basketball on Paper book I talked about in my previous post to get all of the gory details. Possessions used is a stat that records the percentage of possessions a player ends while on the court via a made shot, a missed shot that is rebounded defensively, or via a turnover. 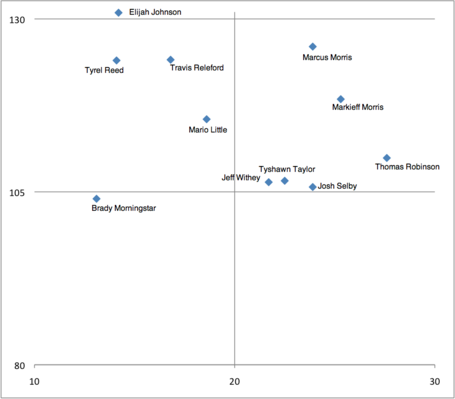