One of the biggest complaints to come out of the Northern Iowa loss last year was Kansas allowing UNI to control the tempo of the game.  Many felt that Kansas could have extended their defense to speed them up and highlight KU's athletic advantage.  As I said last year, using a completely new defense isn't as easy as just saying "Ok guys, lets go fullcourt".  There are lot of things that go into running a good system, a big reason why there aren't a whole lot of teams that do it often.  It takes a lot of practice and there's only so much time.  Coaches choose to work on scouting the opposition and fixing the offense before throwing new wrinkles into their defense. Not to mention, Bill Self has always believed in tough, man to man halfcourt defense.

Personally, I think Bill Self learned from last year's game and is making sure they have a little pressure they can use in the future.  Cole Aldrich threw a few kinks into trying it last year but he didn't have to be on the court at all times.  Kansas could have used it with the Morri and Thomas Robinson, but I don't believe it was practiced last season.  This year though, the Jayhawks have used a little bit of pressure in the way of a 3/4 court 1-2-2 press.

A 1-2-2 is great for a team that has athletic bigs because they have a lot of responsibility and ground to cover if the team wants to be aggressive.  It's also not surprising that Bill Self is choosing this press to run because it is also fairly easy to avoid giving up easy baskets, something he has said he dislikes about press defense.  The strength of the opponent will determine how aggressive Kansas plays.

First up, a quick look at a diagram showing the basics of the 1-2-2 (from Coaches Clipboard).  The red areas in the corners indicate trapping areas.

Below the jump, we'll look at how Kansas sets up and runs their version.

The pictures below are from the KU vs UMKC game, basically a clinic on how to effectively run the defense in an aggressive manner. 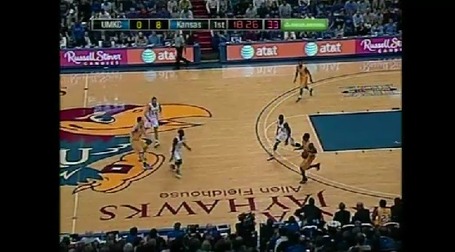 We can see Taylor at the top of the press with Reed and Selby on the sides.  Taylor's main job is to force the ball-handler to a side, so he really overplays the middle.  The dribbler comes down the near side forcing Reed to cover the middle and allowing Selby to trap the dribbler if he continues.  Key in this sequence is keeping the ball away from the middle. 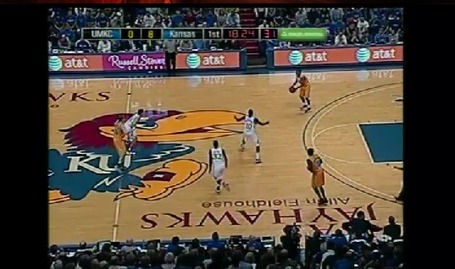 The dribbler stops and reverses the ball to the other side.  Taylor again is overplaying and invites the sideline dribble.  Quick rotation by Selby is the most important part here.  If he's slow to get to the middle, it opens up and the offense has a 3 on 2 advantage going to the basket. 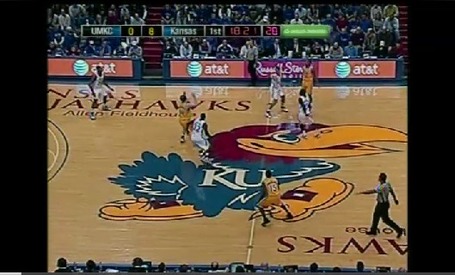 This last clip from this possession shows why Bill Self would be hesitant to run this with a guy like Cole Aldrich.  The back two players are responsible for any passes made long along the sideline, as we can see here with a Morri in the passing lane.  Forcing Aldrich to run back and forth would not have been productive and allowing that pass to be made gives up numbers every time.  The player we can't see in this clip should be in the lane and preparing to stop any layup attempts. 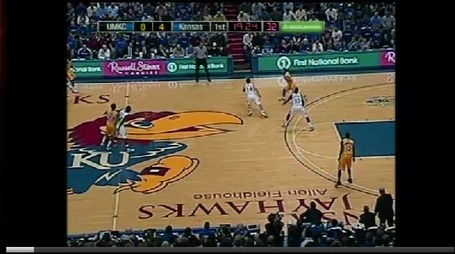 Same players in the same position.  Taylor overplaying to force the dribbler to the sideline and Reed ready to trap.  Selby is in good position in the middle giving the options of either reversing the ball (and eating up more clock) or taking his chances against Taylor and Reed.  We can't see it here but a defender has to be close to the UMKC player in the top left or that pass would be made. 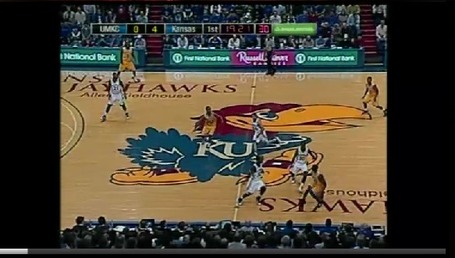 UMKC reverses the ball and we can see a Morri guarding the opposite sideline.  Taylor rotates with the ball, Selby comes up to trap, and Reed covers the middle.  The twin at the top is heading to the paint and the defender in the paint stretches out to his sideline getting in position to steal a lazy pass over the top of the trap.

Like I said earlier, the press worked beautifully against UMKC and these clips could be used to teach the 1-2-2.  Earlier in the year, the Morri were a little slow in getting to the sidelines but that seems to be fixed.