What is the most important factor to Kansas's offensive success?

Share All sharing options for: What is the most important factor to Kansas's offensive success?

If you have been to a team's KenPom page, or seen one of my recaps, then you likely know what the four factors are. In the book Basketball on Paper, Dean Oliver broke down the four most important factors to a team's offensive success. They are: eFG (effective field goal percentage, which gives proper credit to three pointers made), turnover rate (percentage of possessions that result in a turnover), offensive rebounding rate (much like TO rate, percentage of misses grabbed by the offense), and free throw rate (FTM/FGA).

But much like law students*, the four factors aren't created equal. Oliver weighted them thusly:

So in games in which Kansas does well offensively, We would expect them to have a very good eFG, a pretty good turnover rate, similar offensive rebounding numbers (although this is obviously affected by eFG. The higher the eFG the lower the offensive rebounding rate needs to be), and free throw rate can do basically anything.

To determine which has been the most important to Kansas's offensive success, I ran correlations with our points per possession and each of the four factors to determine which is the highest.

A couple of notes: 1. I'm not sure how informative this data is. There is only a half season's worth of data (and it is not counting the Michigan game), and over time you would expect eFG to have a nearly perfect correlation and so on down the line. Still, it is possible that the team is shooting so well that they don't need to rebound well, or that their free throw shooting is basically irrelevant.

Also, with each graph the points per possession is from left to right, with more points being farther to the right, and the vertical axis is the factor that I am measuring.

To start, eFG (which I expect to be far and away the highest.): 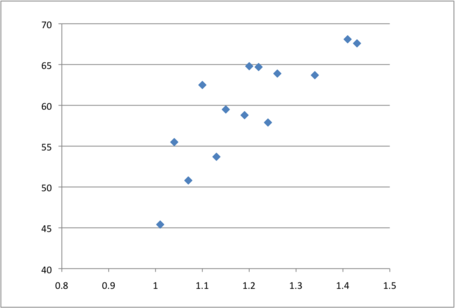 So eFG isn't a perfect 10, but it is as close as I would expect for a half season's worth of data. If you look at the graph you can draw a pretty good line from the bottom left to the top right, with an outlier game or two in there. 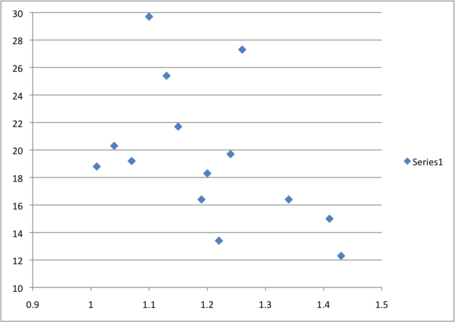 Interesting. Basically, the worse we have done turnover wise the more points we score. Here is a case of it being just too small a sample size. But I guess we probably shouldn't worry about turnovers? 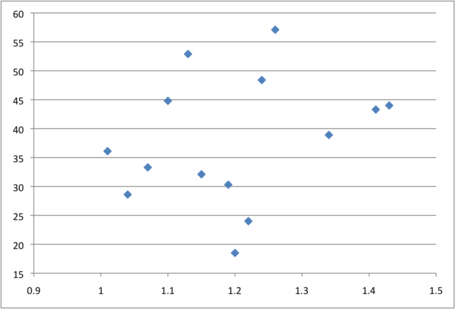 So basically the motto is: nothin to see here. If you look at the graph it is basically a big scatter plot. 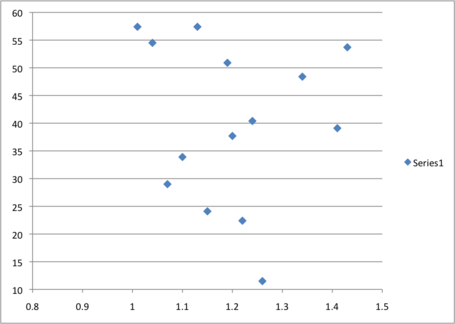 This one is as close to zero as I would expect. Given that this is based on free throws made per field goals attempted I think this is not necessarily proof but the strongest evidence yet that our poor free throw shooting doesn't matter. Or rather, hasn't mattered yet.

Sunday night edit: During the Michigan game I got to thinking something: how much do three pointers factor into our success? We shoot it at a high percentage (Sunday's game nonwithstanding) and I always wonder what the proper amount of threes for us to take is. So rather than keep track of how our three point percentage correlates with PPP (which I think we all know how that would go), I am going to look at how our three pointers attempted correlates with offensive success. 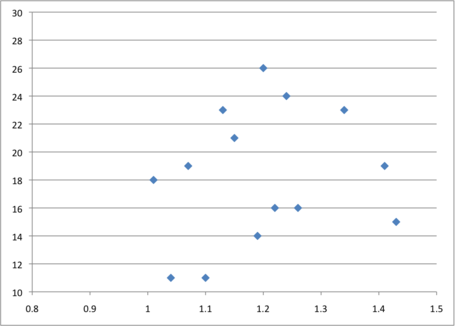 Damn, I was hoping that it would show that the more threes we attempted the better we scored. But it does illustrate the point that two point percentage is more consistent, and probably more important, than three point percentage. For the record, Kansas is currently 46th in 3 pt percentage and 1st in 2 pt percentage.