The Jayhawks will close out the holiday season against the Miami Redhawks of the MAC this afternoon.  The Redhawks are 5-8 and ranked 185 by KenPom.  They've played a killer schedule to this point though, including games against Duke, Ohio State, and Kansas. Teams that are of course ranked 1, 2, and 3 in the polls.  Their best win on the year came against Xavier at home, winning by 11 points.  Worst loss is to UW-Green Bay, KenPom's 195th team.  The other 7 losses all came to teams in the top 110.  We can assume they're not going to be in awe of the Jayhawks.  But I also think we can assume they have no business playing with the Jayhawks either.

Going through the scouting report page at KenPom shows a team that is below average in every statistical category except free throw percentage.  They don't shoot the rock well.  They don't rebound their misses.  They turn the ball over.  Defensively they don't force turnovers and the allow a fair number of offensive rebounds.  The schedule hasn't done them any favors but this also isn't a team that is going to steamroll through their conference once it lightens up. 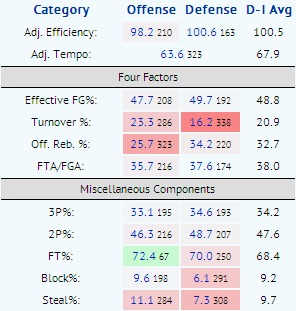 That's a fair amount of pink and pink = bad.  The one area that could be a cause for concern is 3 pointers, Miami is 16th in the nation in 3PA/FGA, they're not afraid to shoot them.  If they start falling, they could make it interesting.

Player impact chart and notes after the jump.

Prediction Time: Jayhawks win.  I'm going to listen to Bill Self and just go along for the ride.  Don't care how they win, just win.