We, here at Rock Chalk Talk, now bring you an abbreviated break from the drab and disappointment that was Saturday's loss to North Dakota State, with what I like to call the Jayhawk Recruit Roundup. After all, Division 1 football recruits have to perform well in high school and give you reason to get excited about them, right?

First off, a quick rundown of any and all articles related to any of our boys' games from the past weekend.

Roos capitalize on SHS fumbles in shutout
Michael Cummings sounds like quite the dual-threat quarterback. I'd like to hold onto him.

RB Miller apologizes to teammates, coach
This is one I'm sure that will garner plenty of discussion. He was suspended for Friday night's game. Click the link to find out why.

Bishop Miege's step up into 5A not a hard one in opener
If Turner Gill wants to run the ball, he needs a 320 pound-plus meat eater in the heart of the offensive line. The Stags, behind current offensive line commit Phil Ford, put up 357 yards rushing Friday night.

2010-11 Tonkawa BucsWeb - Tonkawa Opens With Win
Current linebacker commit Jake Love is pretty nifty on the offensive side of the ball, apparently. Check out the big numbers he put up Thursday night.

Olathe North pummels SM West 29-22
Speak of another defensive recruit doing big things on offense, current defensive back commit Victor Simmons has some moves at the quarterback position for the number-one ranked team in Kansas.

As I mentioned in the links section of the Recruit Roundup, I took in the Blue Valley West at Gardner-Edgerton game on Friday night. What I saw was a very good football team with a very good star player. That would be, of course, everybody's pipe dream recruit, quarterback Bubba Starling.

I had to see for myself just what all the fuss about Starling was. In case you didn't read the article linked at the top, it didn't take him long to give me a peak. To be honest, I had just found my spot along the railing when he went 80 yards, untouched, on the first play from scrimmage. The impressive part of it was that he wasn't just getting there; he was growing the distance of seperation with each step. The kid can flat out run.

He's not a terrible passer of the ball, either. After all, he does possess a 95 mph-plus fastball on the baseball diamond. But, in this game, I got the sense Starling was held in reserve and saved for later in the season.

Now, we all know that Starling is committed to Nebraska, and with the season they're likely to have this year, he isn't going anywhere on that commitment. Unless, of course, he gets drafted in next summer's Major League Baseball Draft and signs with that team. So, how about we talk about someone more within our grasp; someone currently on the committed list. 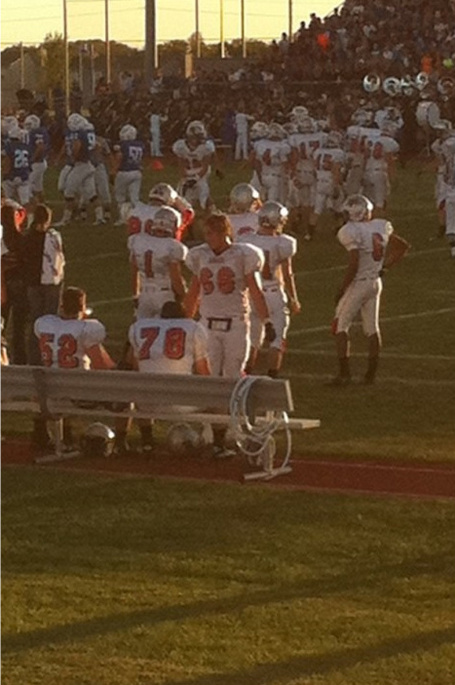 We all saw on Saturday night what not having the necessary offensive line can do to you. What I saw on Friday night was a Blue Valley West offensive line that was outmatched by a fast, more physical, highly trained defensive front seven. Except for one spot on the offensive line, that is. Dylan Admire did more than meet my hopes for seeing him play in person. He surpassed them, it would suffice to say.

Once the BVW coach realized that running left, away from Admire, wasn't working, he started running the ball and rolling the quarterback right. The weirdest thing happend - the Jaguars scored their lone touchdown on a marching drive all the way down the field. On every BVW offensive play, I had my eyes glued to the right tackle, Admire. On nearly every play, I saw the right tackle manhandle the lineman in front of him, taking him to ground in most instances.

In short, I liked what I saw of Admire a lot. The one thing, though, that I did notice was something technique-wise (keep in mind - I'm 6'5", 155 pounds, so what do I know about offensive lineman technique?) that Dylan gets away with in high school because he's so much stronger than his opponents, but won't with in college. He gets a bit on the high side coming off the snap. Being so much stronger and bigger, he can come over the top of opponents and drive them into the ground. In college, he'll learn really quickly that he must get lower than his opponent and drive them back that way.

That's it for this week's Jayhawk Football Recruit Roundup. If you've any suggestions, ideas or comments on how I can make this space better on a weekly basis, feel free to share them in the comments, or email me at KCsince88@yahoo.com. I'm always open for (constructive) criticism. I'm hoping to make the Live and In-Person feature a weekly thing, and see as many local-ish recruits as possible.