Share All sharing options for: Kansas Jayhawk News And Notes 9.2.10 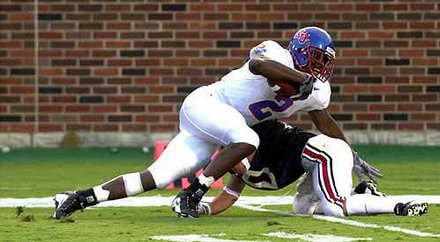 2 Days and counting...and that means two days left to enter into the first RCT Kansas Football Jersey giveaway, click here to learn how.

Gill: QB Webb's role still undecided for Saturday | KUsports.com
Hmmm? Playing him in the 1st half? Either we better be well in control or this would seem to raise questions as to the certainty of the Pick decision.

KU’s rigorous schedule poses challenge for Gill - KansasCity.com
Gill inherits one of the toughest non conference schedules that the Jayhawks have played in the last decade.

Look familiar? Younger Sands embraces underdog role just like dad | KUsports.com
If we have another Tony Sands on our hands, that would be good.

DE Kevin Young looks to break out, with help from Laptad | KUsports.com
A little piece on the other end spot and Kevin Young.

Tony Mitchell a No Go For Now at Mizzou | Campus Corner
MU got their answer. We're still waiting.

BYU Cougars sign longterm TV deal with ESPN - ESPN
I know the BYU has a certain demographic draw, but still? I mean this at least makes me think it would be feasible that a basketball program like Kansas could pull a similar move if they had to.

Big Ten Conference to split Ohio State Buckeyes, Michigan Wolverines - ESPN
Interesting to say the least. Rumor is they will still play every year, but at the moment Nebraska, Iowa and Michigan would look to be the class of the "West" and Ohio State, Penn State and Wisky looking good in the "East". Actually, looks like a fun conference. damn I hate to say it.