Share All sharing options for: How Kansas Contained The Georgia Tech Triple Option 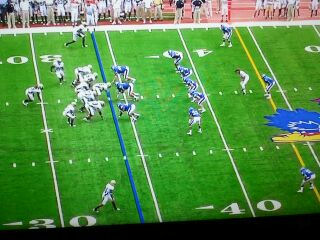 Heading into Saturday's game the question was how would Kansas contend with the Georgia Tech triple option attack.  It's been well documented that the Yellow Jackets have struggled at times with big physical defensive lines.  Kansas didn't really have that option at it's disposal so defensive coordinator Carl Torbush had to find way to attack it from a different angle.

The result was a gamble based on the assumption that Tech couldn't consistently pass.  It wasn't perfect and Tech still put up some yards, but it was effective enough in a bend but don't break style and came up with several big stops throughout the game. 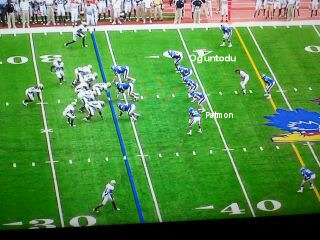 Initially the Jayhawks started the game primarily in a base 4-3 defense.  After an initial drive that saw Tech move 51 yards on 6 plays for a touchdown, Kansas started to move toward the 3-3-5 formation that proved the most effective.

The above image is the first time the team came out in the set and it provides a very clear view of the personnel on the field.  One of the down lineman was taken out and replaced with nickelback Tyler Patmon.  As the game progressed Kansas would cheat up both Patmon and Oguntodu on occasion.  The Jayhawks would also cheat the linebackers up at times or at least show a look which gave the set a little bit of a 3-4 feel at times.

As far as how they attacked the option?  It was geared toward a sellout on the run, while isolating Chris Harris, Isiah Barfield and Calvin Rubles in man on man coverage depending on who was in the game.

Let's run through one play that goes through the progression start to finish. 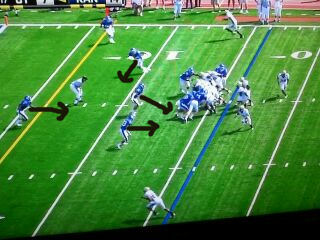 At the snap Tech shows option. The ends and the strong side linebacker pinch while Springer reads dive to quarterback.  Pat Dorsey, Richard Johnson and John Williams had a tough day.  Not that they weren't effective but their role was essentially to get beat up in the middle, tie up blockers and let the linebackers work.  Based on the fact that Springer, Steven Johnson and Drew Dudley finished top three for the game in tackles, I'd say they did fairly well.

The other key here is that Tyler Patmon and Keeston Terry in this instance attack immediately.  Patmon takes on the lead blocker, while Terry cues on the pitchman.  Lubbock Smith also played extremely well in this role and between Terry and Smith the Kansas safeties did the job.  On the back side, Oguntodu rotates over. 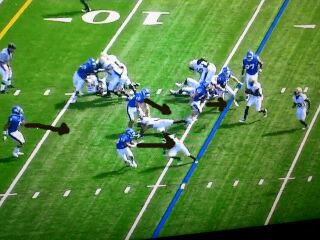 When the fullback doesn't get the ball Dudley comes off a pinching Laptad and takes the quarterback forcing the pitch.  Springer meanwhile sheds the block from his initial read, the fullback, keeps his feet and is also focused in on the quarterback. Between the two and Laptad and Johnson Jr pursuing on the backside, Nesbitt isn't going anywhere so he makes the pitch.

Meanwhile Keeston Terry is firing at the pitchman unblocked.  Patmon also successfully takes on the block from the lead back, sheds it and keeps his feet to pursue to the sideline 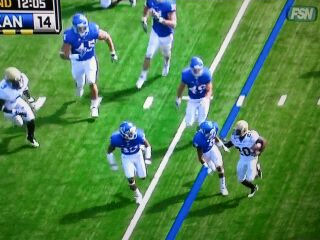 At this point Terry who has been gunning for the pitch almost from the moment the ball was snapped is in position to make a tackle behind the line of scrimmage.  If he should happen to miss, which he didn't, great execution by Tyler Patmon, Justin Springer and Drew Dudley leaves the Jayhawks with three players in pursuit and a option play that is successfully strung out harmlessly to the sideline.

It was a gamble in terms of pass defense and it didn't always work, but the Jayhawks did execute defensively more often than not. In the end Kansas used this formation and this plan of attack to help put away a top 20 team with a solid defensive effort.