Normally we'd have our weekly fun here and talk Rock Chalk Talk fantasy power rankings, but considering we're still over a week from the start of the NFL season we'll take a quick diversion and talk wishlist for Kansas football in 2010. 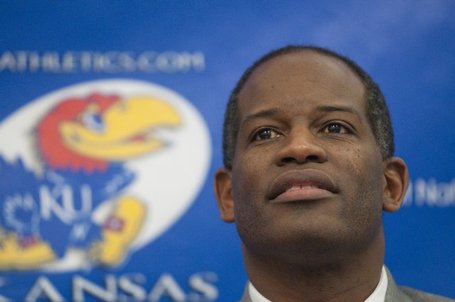 The long offseason of football is full of anticipation, optimism, pessimism and any other number of speculation as the what the future holds.

We dissect depth charts, talk question marks and breakdown schedules with wins and losses.  Putting all that aside and remembering that this is a game can sometimes prove difficult, but what if we took away wins and losses and simply put together a wishlist for our team in the coming season.

Just days away from the opening kick of a Kansas football season with more questions than you can shake a stick at, here's my wishlist for the Kansas Jayhawks, Turner Gill and the 2010 season.

1.  Compete and Compete(on the road)

First and foremost the Jayhawks need to compete.  Win or lose, overmatched or in the lead, this team needs to compete from start to finish.  Perhaps the most disappointing part of the 2009 season was that it seemed like Kansas didn't always put the pads on ready to compete.  Yes they said all the right things even after it came to light that Coach Mangino was fostering a toxic situation, but you can read body language and the signs were there.  Not everybody wanted to be on the field and the motivation wasn't where it needed to be.  Hopefully that's changed.

Looking even deeper at specific games or situations and the Jayhawks Big 12 road woes come to mind.  That's where this goal goes a step further.  Yes winning on the road in the Big 12 can be tough, but a Kansas team that goes out an makes a game of every road contest is a start.

Kansas plays at Baylor, at Iowa State, at Southern Mississippi and at Nebraska.  Minus the Husker game, almost anyone would say those are games Kansas has a chance at winning, some might even spill a little from their overflowing cup of kool aid and say Nebraska is a winnable game. Somewhere along the way Kansas needs to be positioned to win or make a serious game of those contests.  Competing consistently on the road can go a long way toward building this program, might as well start today.

The coaches have talked about it in the spring and now the fall and the players have more than once expressed their feelings on the situation.  Kansas plans to attack.  Far too often we've watched the Jayhawks play not to lose on defense and it doesn't work.  15 yard cushions, umbrella coverages and zero pressure on the quarterback.

Coach Torbush has said he'll bring five every play if he needs to.  The staff has talked about a secondary that they encourage to take a chance at making a play even if it means you have to fall on your face a few times.  They want to force mistakes and they want to create turnovers.

It's a different mentality that this group is speaking about and I hope it does in fact manifest itself on Saturday's.  As frustrating as it is to get beat, I'd rather lose trying to make something happen as opposed to standing their letting someone punch me in the gut over and over.  Now the trick is reminding myself that I said this when I'm cursing a long touchdown pass on a coverage error.

Kansas had rightfully become the Todd Reesing, Dezmon Briscoe and Kerry Meier show.  Those three players were great players and proved to be three of the best to put on the uniform.  But they are now gone.  With that it's time to take a fresh approach.  Football is cyclical and the spread has been all the rage for several years now, but last year we began to see signs that more balance and better ball control might have it's place.

Turner Gill and Chuck Long have set out to do that and I hope we see that throughout the year.  Obviously any coach is going to go with what works so if we end up a pass first offense, then unfortunately it means we can't run the ball.  What shouldn't happen this year however, is a complete abandonment of the run at the first sign of trouble.  Kansas wants to be balanced, Kansas needs to be balanced and I think that's what Kansas fans are hoping they see on Saturday.

This is something that was lost at times last year and fortunately for most every player putting on a uniform Saturday it appears to be coming back.  We have no idea whether Turner Gill will be successful at this point and ultimately wins and losses will determine that, but hopefully we can all keep in perspective the change in culture he has made already.

Yes if things go South for an extended amount of time his player survey's and "Believe" motto's will probably become the source of ridicule, but right now they are the things that excite fans and excite players.  Let's not lose sight of that fact.

Personally I want to win as much as the next person, and I think...stress think...this can lift up a group and motivate inspired play.  In short I like what I see so far, I want to see the same thing on gameday.  And if anyone can find the football equivalent of the floor burn, let's bring back Jerod Haase and see if he wants to track that stat.

This last one is probably a little cheesy.  Some would probably say they don't care how it get's done as long as we have a winner.  For me it's a little more than that.

The last year hasn't been the best year to be a Jayhawk.  I live in Denver and largely dodge the ribbing that I would have received back in my days residing in Kansas City, but I still heard it.  In the last month I've done two radio spots and two podcasts and without fail the question is "what happened"?

We've got a new start, a clean slate with a coach that people want to work with and play for.  He preaches leadership, he hold people accountable.  I hope we can stay off the radar in terms of those embarrassing incidents and find our team recognized for the way they play on Saturday and the things they do to represent Kansas.

It's impossible to keep everything on the up and up, but I hope and expect we're on the way out of a bit of a trying era for Kansas football/athletics.