One story pretty much dominating the Kansas world today. Pick, Opurum and the Depth Chart.  15 Days until gameday.  Also a more detailed look at some of the depth chart storylines on the way for your Friday enjoyment at 8:30 central time here at Rock Chalk Talk. 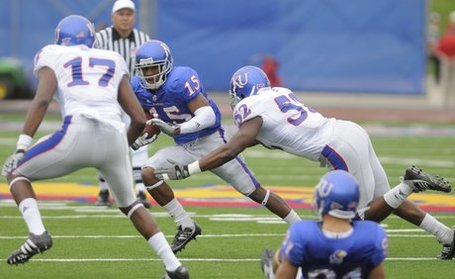 Kale Pick selected as KU's starting quarterback | KUsports.com
Nothing new, but a rundown from local media and their thought seems appropriate.

Jayhawks have a starting QB and a new face at linebacker - KansasCity.com
Brady McCollough Talks QB and Opurum

KU's Gill makes his Pick | CJOnline.com
More Tully, and I forgot to mention...he called Opurum not factoring into the running back conversation on August 4th. Pretty solid work.

Opurum move a gamble | KUsports.com
Sums up pretty well what most are probably thinking.

Jayhawks in the Pro's

New England Patriots vs. Atlanta Falcons - ESPN
Just one catch for seven yard by Meier, but former Chief Tony Gonzalez gave props to the rookie calling him one of the surprise guys and the most impressive rookie.