Midweek LINKS to start your day.  Tuesday recap and new from Wednesday.  Also in honor of the countdown to kickoff...17 days including today until gameday.  Former #17, Tyler Lawrence, anyone have any other #17's to share? 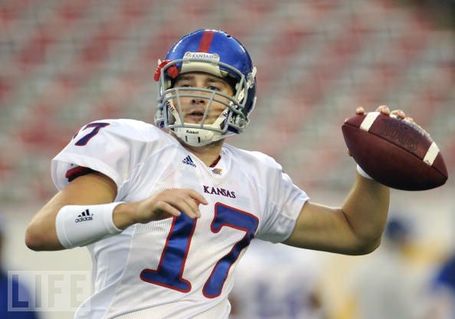 Pleasant surprise: O-lineman Zlatnik seizing opportunity at left guard | KUsports.com
A developing story on the o-line. More on this later today when we break down Turner Gill and his media session from yesterday.

Making the switch: Matthews transitioning from QB to receiver | KUsports.com
I continue to hear good things about Matthews and obviously others are as well.

Jayhawks RB leader a mystery | KUsports.com
A Little Insight Into the RB Competition and The Differences Between Sims and Bourbon.

Columnist Jason Whitlock is leaving The Kansas City Star - KansasCity.com
Devastating News to All I'm Sure.

Did concussions play role in Lou Gehrig's disease? - CNN.com
Purely speculative at this point, but it's going to be scary as time goes on and we learn more and more about the affects of concussions.