Share All sharing options for: Position Outlooks: Running Back

Clearly we can throw this out the window.

A year ago Kansas was painfully thin at the position with senior Jake Sharp the primary go to for carries early on.  When he went down the Jayhawks abandoned their commitment to the run and while Toben Opurum would lead the team in yards, very little of that came in the second half of the season.

A year later and the hope is that things have changed, but perhaps expectations should be tempered slightly.  Angus Quigley, Toben Opurum, Brandon Bourbon, James Sims, Deshaun Sands and Rell Lewis all appear to put Kansas in a good position with plenty of options and ample depth, but which of the six has truly proven themselves?

This is one of those spots where a fresh start could make a world of difference, but it's too easy to put the cart before the horse sometimes.  The reality is Kansas has to prove it at this position.

Opurum enters the season as the Jayhawks lone returnee with any substantial experience.  The leading rusher from a year ago, Opurum is a big back with the ability to contribute in any situation.  The only consistent question seems to be his ability to provide gamebreaking ability.

Overall though, Opurum should be the best option from day one.  His experience running, reading defenses, blocking out of the backfield and catching a pass in the flat makes him the most versatile and best prepared option for gameday.

This could easily be a season where we see a gradual shift in the carries among the candidates as time goes on, but my money is on Toben being a factor from the start.

Six years in and another position change.  During spring ball Quigley was listed as the top back, but he's been unable to separate himself this fall.  Like Opurum, Quigley brings great size to the position and he's a very strong runner, just ask Blake Gideon.

In a lot of respects Quigley brings some of the same qualities to the field that Opurum does but he might be a little less well rounded in doing so.  Again, Quigley is someone who might win out at the starting spot to kick off the season, but unless he's able to seize that opportunity his carries might gradually diminish as some of the younger group develop.

A post spring injury has proven to be a major setback and one that may put Lewis too far behind the eight ball to recover.  In 2009 there were flashes of what Lewis could bring to the table, but once again it looks like it may come down to whether or not he even get's the opportunity on gameday.

You practice how you play, and if you don't practice...it's hard to play

Sands had a solid spring and through two scrimmages this fall has looked good as well.  His size presents some challenges as an every down back, but he could provide a nice change of pace and some situational help as a redshirt freshman.

There are plenty of Kansas fans rooting for the legacy, it should be fun to see where and how he can contribute.

Bourbon and his counterpart Sims both have the ability to be the "feature" back that the Kansas staff continues to preach about.  Bourbon is faster and perhaps the harder runner, while Sims is the quicker more agile of the two.  Both with time however, could be a 20-25 carry per game type player.

The biggest thing holding them back at this point is the well rounded play that someone like Toben Opurum brings to the table.  These two are young and learning so it will come with time.

Again, as the season goes, I'd expect one or both of these freshman to get a chance.  And how that goes will ultimately determine if they are able to steal more and more carries and minutes on the field.  There is a good chance that as they develop, one or both will be contributing solid minutes by the end of the season. 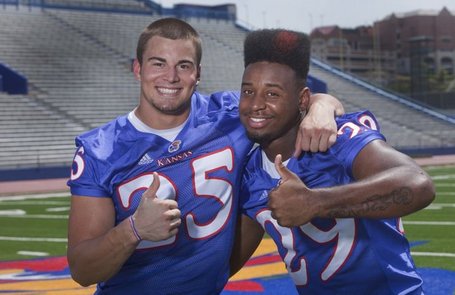 The future looks very similar to the present at this position.  Like many spots on the field the Jayhawks are young at running back.  Following 2010 the Jayhawks lose only Angus Quigley, they return Opurum, Sands, Lewis, Bourbon and Sims.

In addition the Jayhawks do have one running back committed in Wichita native Dreamius Smith.  Smith was a bit below the radar but has a high ceiling with good size and speed.

Another name that continues to float around the radar is Darrian Miller.  Miller was once committed to Kansas and still considers the Jayhawks one of his favorites, a class of Smith and Miller added to those already in the stable would solidify the position for the next several years.