Share All sharing options for: A Walk On Linebacker Candidate: Chea Peterman

The other day as we talked about the linebacker situation someone asked about Chea Peterman's path to Kansas.  I was headed down that road a bit myself, but the comment spurned a little quicker action on my part.  We often hear the stories behind the stars and the big names, but a walk on often takes a bit of a unique path and fans don't necessarily ever get to hear about it.  This is a brief overview of Peterman's football past, his road to Kansas and the current fight for time in 2010.  - Owen K. 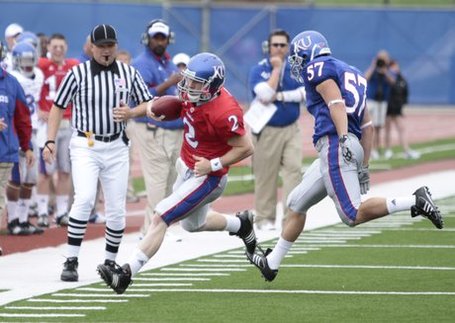 Being a college football walk on is arguably one of the most difficult paths to division one athletics that one can choose.  You don't come in with the same advantages that a scholarship player would.  You get beat up, knocked down and often chewed up and spit out.  It's a battle every day.

Those that make it through deserve the kudos because they do contribute a great deal to the program and a solid walk on system can help pay huge dividends.

Often the best stories are those walk ons that find their way into the rotation, working through the adversity, putting their time in the program and earning the chance to contribute on gameday.  As a fan it's those stories that brings college athletics back into perspective.

In the last week, the loss of Huldon Tharp has opened up an opportunity at linebacker and a walk on with the Jayhawks has emerged as a potential candidate to provide depth and meaningful minutes to the linebacker corps.

This is the high level story behind the player, how he ended up at Kansas and why we shouldn't be surprised by seeing the name Chea Peterman tied to the opportunity at linebacker.  Chea Peterman is a walk on linebacker for the Kansas Jayhawks from Little Rock Arkansas, and this is his story.

Peterman's high school career started and ended at North Little Rock High School in Little Rock Arkansas.  North Little Rock checks in as the largest school in the state of Arkansas and goes head to head with the best the state has to offer.  In short, Peterman competed against high level talent.

As a sophomore Peterman's role was that of backup quarterback but he started on the defensive side of the ball at strong safety.  At the start of his junior year he moved into the role as a starter at quarterback and with that the decision was made to move away from full time defensive duties.  His role at safety was used sparingly and primarily when NLR needed a boost or a big stop defensively.

Following his junior year Peterman was invited to and recruited by both Tulsa and Arkansas early.  He projected as a linebacker, but as often happens in high school, the best athletes end up being used where they can make the biggest impact.  Because of his time spent as a quarterback, the film just wasn't available at linebacker and that affected his recruitment.

A quick sidenote to give you an idea as to the type of athlete Peterman is, he was also an all state soccer player in Arkansas.  In fact he was the place kicker for his high school and briefly looked into the possibility of kicking while at Kansas.  The only problem, you can't kick and play linebacker, it just doesn't happen.

Heading into his senior season NLR Coach Bryan Huston realized that Chea's future was at linebacker and made the choice in the best interest of his player by moving Peterman's primary responsibility to the position.  Peterman didn't entirely relinquish his offensive responsibilities still accounting for 12 touchdowns while lining up at wideout, running back and quarterback during the course of season.

The move to defense did however prove to be the right one.  On defense Peterman flourished contributing 164 tackles, 2 Ints , 2 fumble recoveries and 6 forced fumbles.

Peterman was named All Conference, All Metro, Metro Defensive POY,  First team All Arkansas, 7A Defensive Player of the year, and a Finalist for the Landers Award given to the top football player in the state. Peterman was invited to play in the Arkansas All Star games for both football and soccer., he chose football and was selected as the team captain.

Why would a player with such a resume miss the boat in terms of college interest?  Pretty simple really.  With no junior film and most of his impact a culmination of a senior season, recruiting was largely wrapped up.

Arkansas had taken two linebacker commitments before the season and offered a preferred walk on spot.  Memphis stepped in late, an offer was expected and the staff was fired.  Tulsa another team in the picture early also experienced a coaching change but did stay on Peterman late.  They needed offense and viewed him as an H-Back.  A player from Texas was their first choice and he committed taking the spot.  Air Force was an option as was ULM, but Peterman wanted to try his hand at a larger school.

In the end Kansas and Bill Young entered the picture.  Without Bill Young, Peterman most likely ends up walking on at Arkansas instead of Kansas, but the honesty that Young brought to the table was a huge selling point.

Young followed and recruited Peterman throughout the year but Kansas was only handing out two scholarships in the class that year and Justin Springer would eventually snag the last of two.  Kansas wanted a "bigger" linebacker and Peterman didn't quite fit that need.

On signing day Peterman remained open to any opportunity and on hearing that Bill Young re-entered the picture.  An invite to the spring game and Peterman made the decision that Kansas was where he wanted to be and Bill Young was someone he could trust.

Obviously the road has been a bit tumultuous for Peterman.  He's experiencing his fourth linebacker coach since his recruitment began.  If anyone is looking for another potential reason for the Kansas' problems at linebacker of late, this might be a good indicator.  The turnover at the linebacker coaching position in recent years has been a revolving door.

Last year Peterman was viewed as someone who should have seen more minutes after a solid spring by then linebacker coach Bill Miller.  Unfortunately as we now know decisions within the program weren't necessarily being made by the position coaches.

With Carl Torbush in the picture, it presents a fresh start for Peterman.  Following the injury to Tharp, Peterman has been playing the back up role at all three linebacker spots.  Peterman has great football aptitude due to his time playing quarterback and a variety of other positions on the field.  He reacts quickly and in his fourth season with Kansas the game has definitely "slowed down" a bit as they say.  On top of that Peterman has made every effort to get his playing weight up to where it stands today near the 220-225 mark.

One thing to consider when looking at a walk on is that they aren't privileged to the standard year round access to the training table smorgasbord offered to the scholarship players.  With that comes an uphill battle for a guy like Peterman who is trying to maintain a playing weight.

As far as fall camp, all signs early are pointing to Peterman pushing for that chance.  A chance to beat the odds and contribute as a walk on.  Nothing is guaranteed and things can change on a moments notice, but right now battling in the 100+ degree heat, losing 5-10 pounds a day in sweat, the competition is intense.

Kansas has an opening at linebacker.  Justin Springer, Drew Dudley, and Steven Johnson are the three names standing out early.  But, as we all know, depth is something you can't afford to live without and perhaps that is where Peterman can step in, provide some reps and see some meaningful minutes as a walk on for the Kansas football team.