While You Were Sleeping

Share All sharing options for: While You Were Sleeping

Tobacco road?  Sorry, try I-70 or close to it.  If you're looking for the best basketball in the country right now you can kindly direct your attention to where this interstate runs through the states of Missouri and Kansas and directly at the Big 12.  Tomorrow night while the rest of the world watches either Duke face of against ACC opponent Maryland or Oklahoma State facing Texas A&M, two teams in Kansas will quietly carry on a battle of #2 vs. #5 in the country.

Kansas and Kansas State head into their matchup on Wednesday night with the highest combined ranking that most fans of the two teams can remember in their lifetime.  A battle that will be waged quietly, unceremoniously and without the fanfare from the national media that it deserves.  The fact of the matter is these are two teams that have very real hopes of a number one seed. Throw in an improving Missouri team that should be ranked (I'm looking at you Texas) and you have one heck of a stretch of highway playing some seriously meaningful basketball.

Alas, as it stands today the two top programs in the Big 12 conference will play to a minimal audience of those in the local markets and those who care enough to find a way to see it.  Would you find such a blatant example of ignoring great basketball if it were happening in the Big East?  The ACC?  Maybe you would, maybe you wouldn't.  I understand that schedules are set well in advance, as are most television appearances, but who couldn't see this one coming from a mile away or at least since January. 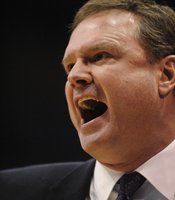 In Lawrence, Bill Self keeps churning out wins at a program that has claimed more victories in the last two decades than anyone in college basketball.  The Jayhawks are a perennial contender, boast more conference championships than anyone anywhere, including a sixth consecutive this season.  The Jayhawks have become a well oiled machine as a program and no one can deny that. 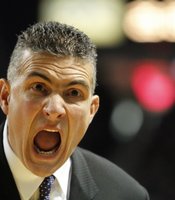 In Manhattan, Frank Martin is one of the most entertaining and passionate coaches to watch and he's recruited top level talent to a program once dead in the water.  The Wildcats have seen a resurgence to a time long forgotten and a relevancy in the basketball landscape that few can argue.

For their part these two teams are ranked #2 and #5 in the AP Poll, #2 and #5 by the college coaches across the country and lastly #1 and #5 in RPI.  The Jayhawks have played the 17th most difficult schedule and the Wildcats have faced the #8 most difficult schedule.  In that time the two teams have experienced a combined record of 51-6 with one of those losses being Kansas' victory over Kansas State in Manhattan.  The Jayhawks and Wildcats have beaten Texas(2), Texas A&M(2), Baylor(2) and Temple all ranked in this weeks AP and coaches poll.  The two teams are 17-4 against the RPI top 50, 8-2 against top 25 teams and again one of those losses is from the head to head matchup of these two same teams.

How then is it that this game is going to fly completely under the radar?  Syracuse faced off against Villanova to as much fan fare and media hype as we've seen this season.  Both are great teams and deserving that hype, but so are the two teams in Kansas.  Rivalry week for ESPN this year was based and scheduled almost solely around Duke versus North Carolina.  Once again, great programs and Duke is a very good team, but that game doesn't even come close to this with or without Tyler Hansbrough's jersey retirement.  Plain and simple this is one of the premier matchups in college basketball without a question.

I know I'm not really telling anyone here anything they don't already know.  Kansas and Kansas State fans aren't the ones missing out here.  Most will find a way to watch it, find a bar, an internet feed or the Big 12 network.  It's fans of college basketball as a whole that are missing out on this one.

Start in Columbia and head west through Lawrence and on to Manhattan and right now you have three programs that are competing at or near top of what is regarded as one of the top, if not the top conference in college basketball.  Three programs that have the look of sustained success.  Three coaches that are doing as good a job as any in the country at building winning teams.  The rest of the world already knows about Kansas, but they don't really know about the rivalries and the other two teams in the equation.

Tonight was a golden opportunity to continue to show the college basketball world what's happening in the Big 12 North and specifically what's happening in Kansas.  The Big 12 North and three teams very near I-70 are making some serious noise.  Two teams from Kansas are making even more.  Unfortunately as the saying goes, if a tree falls in the forest and no one's there to hear it, does it make a sound?