Share All sharing options for: A Few Steps Short

Programming Note: Spring football begins this week.  We'll take a look at some of those what if's on the basketball court and also look ahead to the gridiron.  As for today, they'll be an open thread for those that can stomach watching the tourney, those who can't...see you Monday. 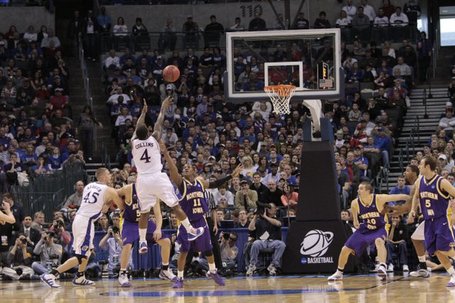 Sometimes you win, sometimes you lose.  For every '07-'08 there's a year like '09-'10.  Kansas as a program has been great for the last 25 years.  They win conference championships at an incredible pace.  They manage conference tournament championships more often than most.

Final Fours, Elite Eights, Sweet Sixteens and of course National Championships.  Still there are going to be missteps along the way as well.  When greatness is the expectation, heartbreak is almost inevitable.  I've said all year that winning a National Title is NEVER my expectation, but with this group a Final Four probably was.

If Kansas had been playing on the final weekend of college basketball, that would have been all I could have asked.  The Jayhawks would have been conference champions for the sixth straight year.  Conference tournament champions and winners of all five matchups in two intense rivalries.  Who wouldn't call that a success?

Unfortunately in the most important stage of the season, Kansas didn't get it done.  The reality is that this team, the staff and the fans set Kansas up to be judged almost solely based on what they would accomplish in March and April.  We had embraced it, greatness was the expectation, but probably never truly the reality.

Go back and look, Kansas had moments of greatness, moments where they looked unstoppable.  At the same time there were plenty of slow starts, close calls and late game spurts to put games away.  It just wasn't as easy as it felt like it should be.  Don't get me wrong, this was a great team, but there were still plenty of reason to be concerned.

A 33-2 record masks a lot of those issues. Was chemistry a problem?  Were there injuries holding certain players back?  Did this team just lack an understanding of what it takes to be great?  Sherron and Cole were part of it, but almost everyone else was new following the national championship season.  They had benefited from the title but they weren't part of the struggle to get there.

Perhaps this team could have benefited from another loss here or there.  They did win the conference by 4 games, there's room for error.  It's tough not to look at what if's, talk shoulda, coulda, woulda's, and even place blame, but what's the point.  The Jayhawks came up short.  Still I don't envy any other programs success and I wouldn't trade a moment or a thing about what Kansas has.  I'm a Jayhawk and the fact remains that the good times typically outweigh the bad.

Bill Self says that the difference between winning championships and coming up short is one possession.  This time Northern Iowa came up huge for one possession and Kansas did not.  Life goes on, the sun comes up and a new journey begins.

A couple quick sidenotes, I've enjoyed seeing all the new faces here as I've gone back and re-looked at threads and analysis.  Welcome to all and differing opinions are great and welcome obviously.  What has and still does impress me most is the level headedness of everyone here.

As I mentioned I was on a plane flying during the entire second half so all I knew was the score when I landed.  I was irate on the drive home, but a nice 45 minute reading and perusing of Rock Chalk Talk was all the therapy I needed to turn the page.  This is a pretty solid community we have here and that extends to schools and sites around SB Nation including Bring on the Cats and Rock M Nation.  The season fell short, but the journey was still memorable and incredible.

One other quick story.  I'm walking up to the airport bar to try and catch the first half and everyone but one lady was cheering for UNI to beat Kansas as naturally people tend to root for the underdog.  I notice the lady in the Kansas shirt and at this point with us down 3 I say to her that, "this isn't what I wanted to see".  Her response gave me a very bad feeling.  "Oh we're fine, this is what we do.  We always start bad and then come back playing good late."

I thought to myself that this lady was right, but you can't win a title or get to the Final Four by playing that way.  You can't rely on turning it on and off against good teams for six games in a row.  When she said that I had a sinking feeling in my stomach that the upset was happening, she just didn't know it yet.