The Kansas defensive backfield is a bit of a mystery.  Sure it has looked pretty bad at times and the revolving door at corner is troubling.  The question becomes, how much of that was really deserved.  Players need time to learn and grow.  Kansas defensive backs haven't been afforded that opportunity in recent years.  The standard protocol has been go out on the field, get beat once by some of the top offenses in the country and find yourself on the practice squad without passing go.

Kansas returns Lubbock Smith, Chris Harris, Anthony Davis, Phillip Strozier, Calvin Rubles, DJ Beshears and Ryan Murphy all having seen time last year.  Throw in Greg Brown, Prinz Kande, Dexter Linton and Tyler Patmon and the Jayhawks have a pretty wide range of possibilities, but you can never stop building the defensive backfield for the future.  Right now you can't have enough depth at this spot in the Big 12.

Kansas did sign just two but they were two high quality versatile recruits that should build on the existing depth at Kansas.

Perhaps the most surprising thing at this position is that Kansas didn't secure either of the two players joining the Jayhawks until the new staff was put in place.  The first is Ray Mitchell who just so happens to be the teammate of running back James Sims.

Mitchell is coming off a very strong senior season that saw him jump into the top 100 players in the state of Texas according to rivals.com.  Mitchell could likely play at either the safety position or the corner position at the next level but spent most of his senior season at free safety in a 4-2-5 where he recorded 91 tackles. 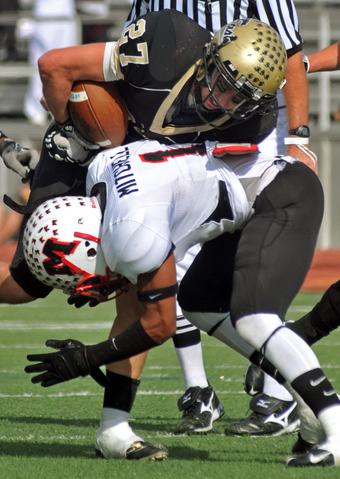 Strengths:  Mitchell has great size, he's fast, athletic and a solid tackler.  He has experience playing both the corner and safety position and could likely go either way in college.

Question Marks: How will he handle coverage at the next level.  While having the flexibility to play both positions can be a good thing it can also be a bad thing in some respects.  Jack of all trades, master of none.  This may not be a concern at all with Mitchell but it appears to be what kept many other schools from jumping in to recruit him early.

Dexter McDonald is a three star defensive back recruit out of Rockhurst High School in Kansas City, MO.  That in itself isn't a huge deal, but when you consider the players that have come out of Rockhurst in the past and the fact that Kansas was able to snag this one away from Missouri, it's a victory.

McDonald is like Mitchell in that he will have the skills and ability to play either corner or safety at the next level.  As a staff this is a great position for the Jayhawks to be in, bringining on two quality defensive backs that have a tremendous amount of versatility in how they can be used. 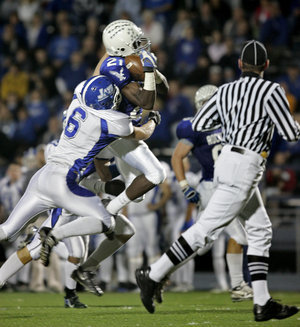 Strengths: Size, speed, athleticism and versatility.  Dexter is an athlete.  I feel a little like I'm writing about Ray Mitchell all over again with this one.

Question Marks:  If there is one area that Dexter could work to improve it was in the tackling department.  Dexter could certainly become more physical with his size and attack the offensive player on the tackle.  If he can put that with the rest of the package he'll be a very nice pickup.

So there you have it.  Top to bottom the list of 18 Kansas football signees this season.  It's a low number this year due to scholarship availability but the staff did a nice job with the short time frame they had to work.

As you all know, the recruiting never stops and 2011 is already beginning.  Junior day is around the corner and the local crop has a good bit of talent to it this year.  I've already gotten a little bit of a jump in that department so stay tuned in the future as we start to the process of uncovering the class of 2011.