Linebacker, a position that was solid at Kansas from 2005 to 2008 suddenly became a bit of a liability in 2009.  It seems the depth at the position had hurt the previous staff ability to recruit solid replacements.  Combine that with injuries and a few other obstacles and the lone bright spot for the Kansas linebacking corps in 2009 was a true freshman.

Obviously the hope would be to fill some of those voids.  With a coaching change combined with missing out on any JUCO possibilities the staff has recruited or re-recruited a trio.  While it's tough to say that any are the answer it certainly would be nice to start refilling the pipeline with some fresh blood.

The first linebacker we'll look at is one that fits perhaps the more traditional middle linebacker role.  Certainly the trend in the Big 12 is smaller, faster, more athletic backers but teams still need a man in the middle that can stuff the run and handle life on the interior.  Enter Ed Fink.  Probably one of the better names for a Jayhawk middle linebacker since Dick Holt of the early 90's, Ed comes to Kansas from the St. Louis area  where his former and now future teammate Tom Mabry was recruited out of as well.

Fink has a story much like Keba Agostinho in that he sat much of his junior year with a broken leg.  Gaining recruiting attention can always be more difficult when you have limited film and find yourself coming off an injury as many coaches will take a wait and see approach.  Kansas however was ready to commit to Fink early and Fink did the same.

In his senior season Ed certainly didn't disappoint proving the Kansas staff at the time that they had made the right decision.  Fink finished his senior year as an All Metro selection in the St. Louis area whle recording 149 tackles and 8 sacks.

Strengths: Ed fits the mold of your classic Kansas middle linebacker of recent memory.  He's aggressive, strong, has good size and is tough as they come.  Last year we saw a little bit of a move toward the running game by both Nebraska and Kansas State in the North, if that trend continues...guys like Fink might come back in demand around the Big 12 sooner rather than later.

Question Marks: At this point the two things that have come into question are Finks discipline and agility.  Not discipine in the sense of being a hard worker, but in the Mike Rivera sort of way.  Rivera often found himself overrunning plays looking to make a play and would end up out of position.  Fink has at times shown that same tendancy. 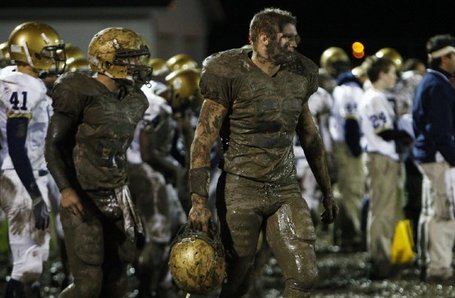 Yeah, that's Ed Fink...the one without a helmet and no white on his jersey.

Jimmay Mundine is a player that is a little tricky here on signing day.  He was recruited by the former staff as a linebacker.  He has been quoted as being interested in the tight end position.  He was an all district tight end in Texas.  Whether he stays at linebacker or moves to tight end is what I'm not so sure about.  Obviously the linebacker position is of greater need right now, but if Mindine is that much better a prospect at tight end perhaps the new staff gives him a look.

Strengths:   Mundine is mobile, athletic and strong.  He played a some end and some LB at the high school level but his height becomes an issue off the edge at the next level.  With a move exclusively to outside linebacker being the initial plan Mundine could provide the right mix of speed and a little bit of size to fill that ever difficult position in the Big 12.

Question Marks: Experience.  Mundine is going to be jumping into a position in the Big 12 that might be the most difficult to play.  As an outside linebacker against the spread you truly are tasked with handling nearly anything the might be thrown at you, coverage, a power run, a scrambling QB.  It's a tough position and there is no real test on the high school level to prepare.  Whether or not Mundine can make that transition is the question. 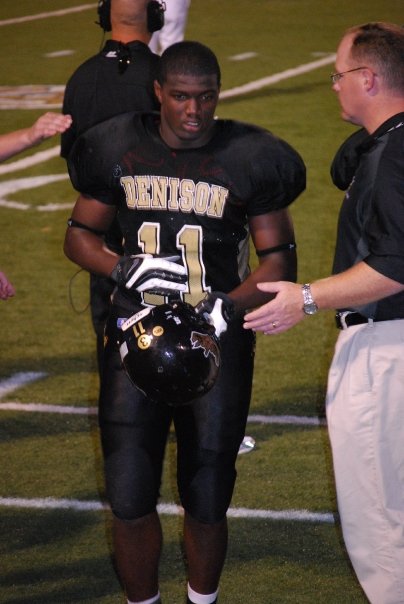 The third and final linebacker that Kansas has committed to sign is Jake Farley out of Iowa.  Farley is the son of a coach and a coach who actually spent time at Kansas during the Terry Allen era.  As a result Jake is pretty familiar with Lawrence and when the opportunity arose he took the visit and shortly thereafter switched his commitment from SMU to Kansas.

In high school Farley played safety, quarterback and running back in Cedar Falls Iowa.  Plain and simple Farley is an athlete.  At Kansas the goal is to move him into an outside linebacker role using his combination of decent size and speed to his advantage.  The comparisons have already been drawn to Kansas freshman OLB surprise Huldon Tharp from a year ago.  If he lives up to that, Kansas might be getting things back in order for the future.

Question Marks: Again he's a last minute sleeper.  Quite simply the question is why? Not much out there on Jake so I'd be lying to speculate.  What we know is that he has the pedigree but other than that, he's kept clear from a lot of the recruiting machine.