Linebackers coming up at 12:30PM CST

Perhaps one of the most important positions on the field has and most likely always will be the front four on defense.  This group has the ability to make everyone look better.  Defensive tackles that can command multiple blockers or change the line of scrimmage.  Defensive ends can disrupt the rhythm of the quarterback and contain the run.  Any way you look at it, these are critical to a successful defense.  They can make your linebackers better, your defensive backs better and elevate the whole team.

Kansas returns some depth at both positions but the long term prognosis is still questionable as it nearly always was during the last regime.  Richard Johnson Jr, Jamal Greene and Big John Williams all return with experience on the interior from a year ago.  The fact of the matter is these three have been or should be effective for Kansas.  Throw in an undersized Patrick Dorsey, a potential return to defense for Darius Parish as well as Travis Stephens a bit of a tweener and Kansas should be able to find some depth this year in the middle.

At the end spot it's a little more suspect.  Jake Laptad is a fairly proven commodity.  Quinton Woods will have a year under his belt and his ability to step up will be telling.  Kevin Young and Randall Dent have both completed their redshirt seasons and will likely be looked at very early on for meaningful minutes.  Overall though, both positions can use help and Kansas has signed four to help the cause.

The first commitment to join the Jayhawks on the defensive line was that of Jeremiah Edwards.  Edwards joins Kansas from Garland Texas where former fan favorite James McClinton played his high school ball.  The school isn't all the two have in common however as both are very much a similar player.  Undersized but powerful defensive tackles.  McClinton changed the line of scrimmage for opponents and that helped the Jayhawks to the Orange Bowl Championship in 2008.  Edwards has the potential to be the same type of player.

Edwards has been with Kansas since last April.  Briefly reevaluated his decision after the coaching change.  However, after a visit from coach Gill and an official trip to Lawrence there was no turning back.  Edwards was a Jayhawk all the way.

We've talked with Jeremiah several times here at RCT and he is a character.  Last night I reached out to him again and asked him what Kansas fans would say about Jeremiah Edwards 3 years, 4 years, or 5 years from now.  His response fits his personality to a "T".

A BEAST! A CHAMPION! A GREAT MAN!

Strengths:  Edwards is explosive off the ball, powerful, quick and disruptive.  It sounds like a broken record but he truly has some very similar qualities to James McClinton and I can't imagine anyone would be disappointed with another player like that.

Question Marks:  He lacks the desired size for a BCS caliber defensive tackle.  Edwards lists at 6'1" 270.  He might weigh in a little higher than that but his height certainly isn't measuring short.  With 3 more inches to his frame Edwards is a player that would have seen some major offers, fortunately for Kansas he isn't and because of that the Jayhawks might be reaping the benefit in the near future. 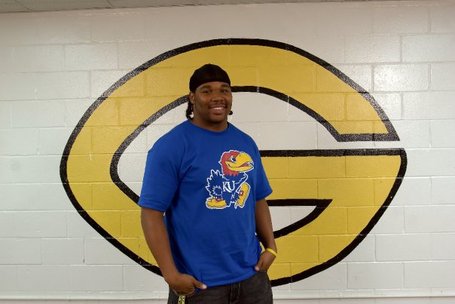 One of the more recent commitments and definitely one that flew under the radar for much of the season is a Kansas City area prospect in Pat Lewandowski.  The Big Lewandowski as some have him coined, truly was an under the radar player until the arrival of the new Kansas staff.  He took his official visit for the Texas Tech game where he watched his brother suit up for the Red Raiders.  Following the trip he gave his verbal commitment to Kansas and has since recieved a three star ranking as an end.  Obviously a position of need for Kansas and Lewandoski provides a long, explosive, high motor player at the position.

Strengths: Obviously size and frame are a big positive when looking at Pat.  He stands 6'6" and could easily add some weight to his frame and still be a very effective defensive end.  When you think about the career Jake Laptad has put together at Kansas that is very much what Pat could do if not more with the right weight and coaching.  He has great length and a motor that just doesn't quit.

Question Marks:  As with any "under the radar" recruit the question to be asked is why?  What did people not see that Kansas thinks they did.  Is this simply a situation where the new staff had limited time and wanted to fill a need in some way? or is Pat truly a guy that slipped through the cracks because film wasn't sent out or something like that.  Time will tell the story on this as sometimes you hit and sometimes you miss on the last minute sleepers. 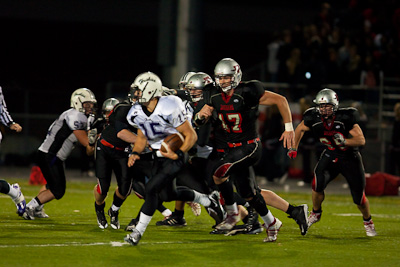 During the early part of the season the former Kansas Jayhawks staff was doing a fantastic job in the state of Texas as had been the norm over the past two seasons.  This year once again a set of teammates ended up with the Jayhawks.  Jaqwaylin Arps out of Denison Texas was originally committed to the Texas Tech Red Raiders.  When he and his teammate Jimmay Mundine decided to take a trip to Kansas that started to change.  Mundine would commit to the Jayhawks first while Arps teetered on the fence a little longer before finally pulling the trigger and committting to Kansas.

Arps actually earned first team all district honors in high school as an offensive lineman but his role will be on the defensive side of the ball in college.  As a senior Arps would record 60 tackles, 8.5 sacks and force two fumbles.

I spoke with Arps last night and asked him what he thought his strengths are from the end spot and what he brings to the table.

"I love to compete, I hate to sit out and watch.  I think I have something to prove and that is going to help me out."

"I can bring speed off the edge, but I can also be a power rusher depending on the situation." 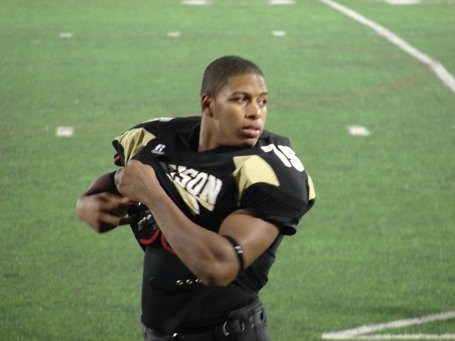 Strengths: Jaqwaylin is an end prospect that is quick off the ball, has very solid techinique and does well as a pass rusher.  He checks in at 235 now but could easily play at 255-265 at Kansas.  He has experience as an all district offensive lineman as well so he understands the position and has been said to use his hands well in head to head matchups.

Question Marks: Right now Arps needs to put on some weight and add some strength.  A division one training program should solve most of the question marks surrounding his ability to make an impact.  From there it's a matter of how the staff wants to use him.

A late addition to the 2010 recruiting class comes in the form of another under the radar recruit, this time out of Houston Texas.  Keba Agostinho primarily slipped under the radar because he spent most of his junior year on the sidelines with a broken arm and as a result had no film to send to recruiters.

His relationship with Buddy Wyatt who started recruiting him at Texas A&M would pay off and good things would start to happen for Keba once Wyatt headed for Kansas.

Keba would finish his senior year a first team all district selection on the defensive line and as he heads to Kansas he could find himself at either end or tackle depending on how things shake out.

I had a great conversation with Keba last night and I thought I'd just post most of it here since this is the first time we've had a chance to talk with Keba.

Keba, you are a bit of a last minute surprise recruit for the Jayhawks, tell us a little bit about the recruiting process, how Kansas got involved, who recruited you and what sold you on the opportunity?

My recruiting wasn't going good because I missed most of last season with to a broken arm. Coach Wyatt was recruiting me at A&M and when he went to Kansas he started recruiting me there too.

So you didn't really have a junior film to send out and get recruiting going for you?

Makes sense. So when Coach Wyatt came to Kansas and gave you a call what was it about you that he liked and was interested in?

He had seen my tape at A&M and liked it but he had never seen what I looked like in person, I think when he finally visited and saw me in person he knew for sure he wanted me. the 1st time he called it was to introduce himself and touch bases. A week later, they offered

Talk about your official visit? How did it go? Who hosted you? What sold you on Kansas? Where do they anticipate you playing position wise, coaches you met and your thoughts?

My visit was really good. I was surprised by a lot of things I saw. I was hosted by Kevin young and I spent a lot of time with Huldon Tharp, Jordan Webb, Nick Plato and Tyrone Sellers. Kansas is looking at starting me off at DE for a year or two and if I get bigger and stronger they wanna move me inside. I liked the coaches, I like coach Wyatt he's a good honest coach and coach Gill is too.

What would you say your biggest strength or asset is in terms of the End or tackle position?

I'd say my hands and quickness are definitely my best assets.

I think I am a better DE. but I can do both.

If you weren't going to end up at Kansas where would you have been?

Well we're certainly glad to have you a Jayhawk...any last words or things Kansas fans should know about Keba Agostinho? 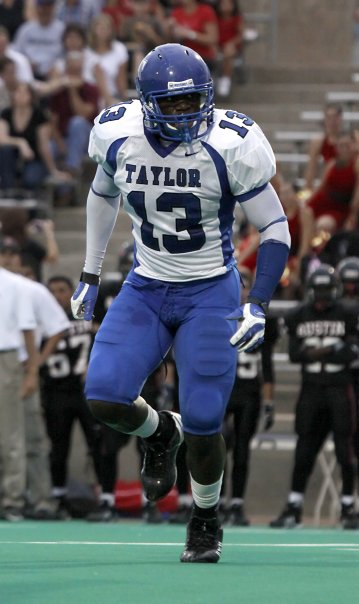 Strengths: Keba is extremely explosive off the line, he get's into the opposing backfield and makes plays.  He is a very solidly built defensive lineman that could go outside with his speed but also move to the interior depending on how much additional weight his frame can carry.