Wide Recievers and Tight Ends in about an Hour 8:30amCST

As the saying goes, nothing is over until the ink is dry.  Today the ink dries.  Today is National Signing Day 2010 and RCT will be bringing a breakdown of the 2010 Kansas football recruiting class all day long just as we did last year.  We'll be bringing you profiles, highlight tapes, quotes and interviews for as many recruits as we could track down.

More than anything though please use these as your place to discuss the recruits, the class, football, and signing day 2010.  This is a great day, a fun day and even though we're looking at a smaller class this year Coach Gill and company have done a nice job of putting together some solid players.  Today's schedule breaks down as follows:

I'll be adding to the posts as needed but basically there you have it, once again join us all day long and now let's kick things off in the backfield with the RB's and Quarterbacks.

First off the Kansas Jayhawks received a bit of a last minute surprise in four star running back prospect Brandon Bourbon.  Bourbon had been committed to the Stanford Cardinal for the better part of 5 months but after the coaching change, an official visit to Lawrence and some heavy thinking, Bourbon made the decision to stay closer to home and be a Jayhawk. 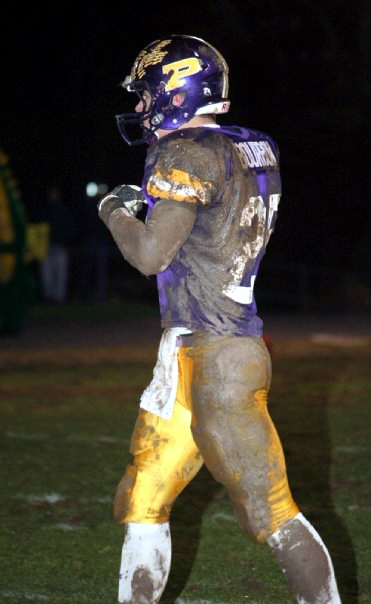 Strengths: Brandon has the physical makeup to be a contributor immediately.  He's a strong runner who also possesses breakaway speed in the backfield.  At a lean 205-210 Brandon definitely has the frame to add some good weight while still maintaining his speed.  Overall he's a back that has all the tools to make an impact and add serious depth to a position in need of depth at Kansas.

Question Marks: The biggest question mark surrounding Brandon has always been the competition level he played against.  When you watch the film below it's clear he's a man amongst boys and that might have something to do with playing in a smaller class in the state of Missouri.  From my perspective it's a little bit like beating up on a non conference opponent.  I'm always a little less worried when you handle them in the way a top team should handle inferior talent.  Brandon does that on the player level and personally I think he will have something to prove and set out to accomplish that.

The next player in the backfield that will sign with the Jayhawks is James Sims a running back out of the Dallas/Fort Worth Metroplex.  It's a well known fact that Kansas recruits this area hard and this is a key area for the Jayhawks in developing it's program.  Sims was an early commit to David Beaty and Mark Mangino's staff so with the changes that occurred it was welcome news when Sims reaffirmed his commitment following an official visit in December.

Sims is a Texas top 100 player according to Rivals and was listed in the top 100 area prospects in the Dallas Morning News.  Sims wrapped up his senior season rushing for 1762 yards and 20 touchdowns with a 6.8 yards per carry average.  His high game for the year came in a 63-35 shootout with South Grand Prairie.  During that game Sims would carry the ball 25 times for 377 yards and 7 touchdowns with a 15.1 ypc average.  Not a bad game. 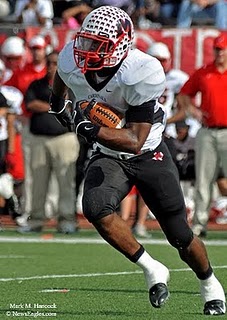 Strengths: Sims is viewed as a solidly built sturdy back with a good awareness in the backfield.  Spent most of his high school time in the spread and does a nice job of reading blocks and making the cut to hit the hole.  Sims also does a nice job blocking out of the backfield.  Obviously this is an area nearly all high school running backs do need improvement on for the next level but Sims does do a nice job at this stage in the game.

Question Marks: Some have questioned Sims running style as too upright and his speed has been questioned at times.  Again, this is a bit nit-picky in some respects as Sims has no problems with "football speed" and with some good coaching at the next level any running issues can surely be addressed.

Quick Video Highlight with Sims(#5).  Sims rushed for 232 yards in this game vs. Nimitz.  Not the best but it's something.

The third and final player signing in the backfield for the Jayhawks is actually already signed, sealed and delivered to campus.  Quinn Mecham brings some needed depth and competition to the quarterback spot as the Jayhawks look to replace a Kansas record holder.

Mecham is a junior college transfer who joined the Jayhawks at semester after two years at Snow College in Utah.  During his past season with Snow College, Mecham completed nearly 63% of his passes for 3,091 yards and 40 touchdowns with only 11 interceptions.  Snow College finished the year ranked fifth in the nation and Mecham was twice named player of the week across the country.  By the end of the season Mecham found himself the number two ranked Junior College quarterback in the country.

Strengths: Experience is first and foremost what Mecham brings to the table.  Two years running the spread in the junior college ranks have prepared him well for the transition to the Chuck Long led offense.  Early reviews from 7 on 7 drills are very positive in terms of what Mecham could provide.  He obviously brings a proven ability to throw the ball, make good decisions and does move well for a quarterback.

Question Marks: As with any junior college transfer the question is always why?  Why are they in junior college.  There are usually two reasons.  First, they didn't qualify out of high school.  That couldn't be further from the situation with Mecham.  The second reason is they just didn't get the looks.  Mecham wasn't heavily recruited so the question is whether he's developed enough in two years to overcome what most ignored when he was a senior in high school.  That certainly looks to be the case, but he'll still have to prove it on the field to make Jayhawk fans truly rest easy, especially with the recent history of JUCO busts joining the Jayhawks. 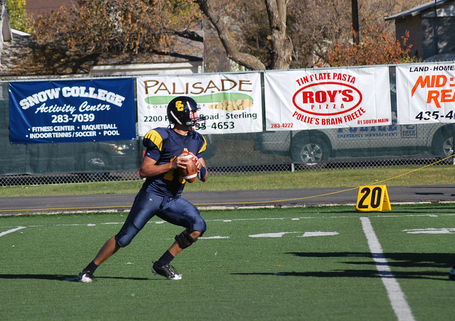