The Progression of Bill Self's Mood

Share All sharing options for: The Progression of Bill Self's Mood

Pictures sometimes say what words can not... 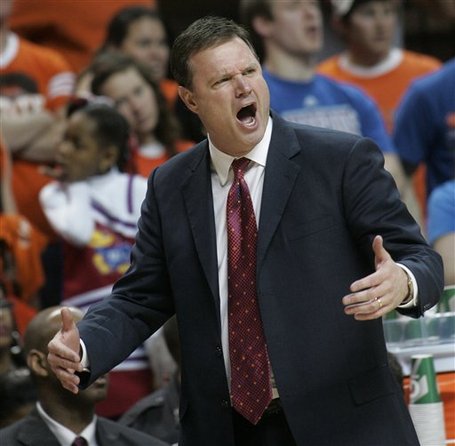 Sherron drives into a crowd and turns the ball over.
Sherron throws up another contested three pointer.
Three second call.
Carrying call.
You take your pick.  There were plenty of offenses worthy of this look all day. 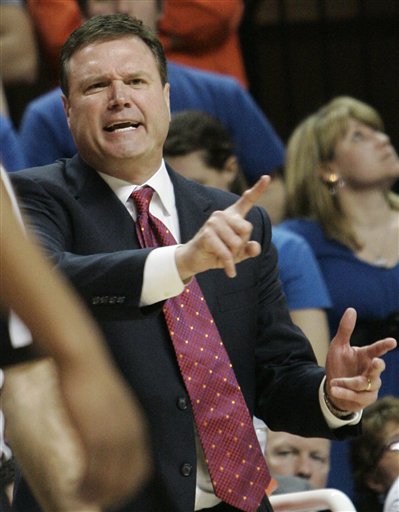 Sherron drives into a crowd and turns the ball over.
Sherron throws up another contested three pointer.
Marcus misses another free throw.
Again, take your pick.  The previously mentioned happen far too often. 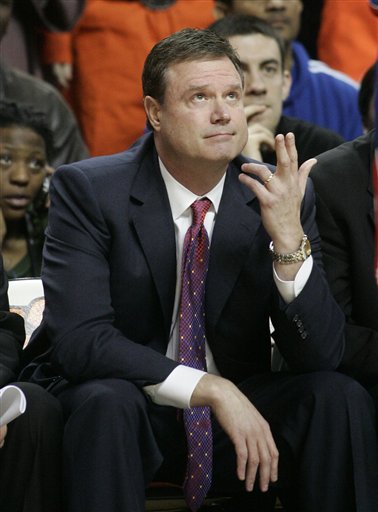 That one just about says it all, doesn't it? 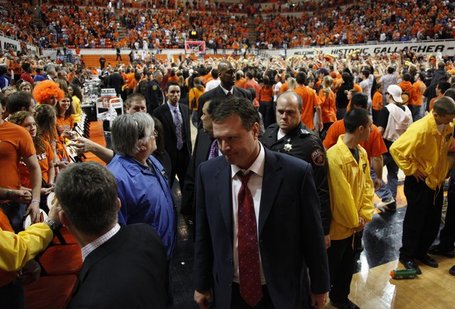 Also, look who else was at the game today.

Having had a couple hours to think about the game and re-watch bits and pieces through the highlights, I may have given Oklahoma State too much credit.  Yes, they shot lights out for 40 minutes, and beating them was always going to be an uphill battle given that circumstance.  But, there were things Kansas could have done (or not done) that would have prevented such a large hole to climb out of.

Sherron was extremely frustrating today.  He reminded me far too much of the Sherron from last year - you know, the one where he felt obligated to do everything and erase a double digit deficit with a single shot.  He repeatedly made good dribble penetration, only to be stonewalled and attempt a desparation pass to get out of trouble, which landed in the hands of a player in white more often than not.  It says the world of how much he wants to win and how hard he is willing to go to make it happen.  He needs to trust his guys more, though.  We said that all last year.  For what it's worth, he's taking blame for the loss and saying all the right things.  Would anyone ever doubt that he wouldn't?

A loss is a loss is a loss, right?  Although, it hurts me a tad less the way it happened.  I'd rather lose a game where the other team was just better on a given day and it be as obvious as it was Saturday, rather than lose a nail-biter on a last second shot.  The late run to get it to six also made me feel better about it.

I am often guilty of not panicking when I should.  You can see the 2009 Kansas football season as a prime example.  All along, I maintained the stance that when a team is good, they will be good.  "The laws of averages always work themselves out."  I believe that.  A whole heck of a lot.  And, it was evident today.  It is so rare that a team goes through an entire season with just one loss.  Forget undefeated.  One loss is an accomplishment.  But, it's time to admit (maybe to myself) that this team isn't quite where they need to be to go all the way.  Yes, they are probably still the best team in the country, or at least top two or three.  They are top two or three talented, as well.

But, you don't win games on talent alone.  We saw that in 2008.  There were minor things that needed tweaking and fixing then, just as there are with the current version of Bill's Boys.  And, it was then - after a loss in Stillwater - that the Jayhawks went on to win 13 straight and a national championship.  It was a serious disappointment then, and it is much the same again in 2010.  Here's to coach Self working whatever magic it is he used in '08 again in '10 and cutting down the nets, once again.

You hold the key to my happiness, Bill.  Please don't let me down.