Kansas Looks to Avoid a Trap in Boulder

Share All sharing options for: Kansas Looks to Avoid a Trap in Boulder

Preview coming a day early because tomorrow is NATIONAL SIGNING DAY.  If you were around last year you might remember our all day coverage and we will be ATTEMPTING to do the same tomorrow.  Basically starting in the morning and running through the afternoon we'll go position by position giving highlights, interviews and whatever else we can find on the signees.   Consider it your forum to talk about the players that are putting ink to paper and making it official that they will be Jayhawks.  Hopefully we'll even have a couple last minute surprises.  Should be fun so join us if you can. 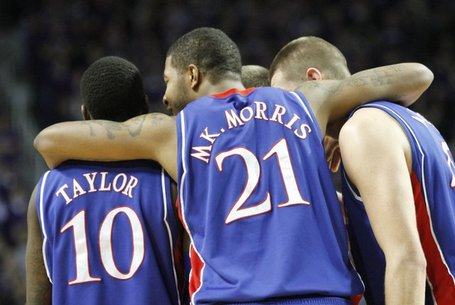 Colorado has lost four of its last five games with three of those losses coming by six points or less. The Buffs are 10-1 at home this season. CU averages 75.8 points per game and gives up 71.9. The Buffs lead the Big 12 in free throw percentage at 76.7 percent, while Kansas is sixth at 71 percent.

Junior guard Cory Higgins leads Colorado in scoring at 18.3 points per game, which is fifth in the Big 12. Higgins is one of four CU players who have made 20 three-pointers this season and he leads the team with 39 steals. His 51
assists are second on the squad and he is third in the Big 12 with an 83.1 free throw percentage.

Freshman guard Alec Burks is next in scoring with 16.3 ppg and he leads CU with 4.7 rebounds per contest. Junior
forward Marcus Relphorde is a starter who scores 10.4 points per game and has 22 three-pointers, while senior guard Dwight Thome II comes off the bench to score 8.9 ppg and has a team-high 27 threes.

Sophomore forward Austin Dufault (6.8 ppg, 3.4 rpg) and sophomore guard Nate Tomlinson (5.7 ppg, 2.6 rpg) are both starters. Tomlinson has 20 three-pointers, leads the team with 90 assists and his 4.3 assists per game average is sixth in the Big 12. Junior forward Casey Crawford (4.2 ppg) and junior guard Levi Knutson (2.8 ppg) are both regulars off the bench for CU.

Colorado coach Jeff Bzdelik is in his third season at CU with a 32-52 record. Bzdelik is in his seventh season at the collegiate level with a 107-99 overall record. Bzdelik came to Colorado from the United States Air Force Academy, where he guided the Falcons to a 50-16 record (a 75.8 winning percentage) in two seasons from 2005-07. During those two seasons he led the Falcons to a 2005-06 NCAA Tournament and a 2006-07 NIT Final Four appearance. Bzdelik brings 30 years of coaching experience to CU from the collegiate and professional ranks. He returned to the college game in 2005-06 after 15 seasons as both a coach and scout in the NBA, including two-and-a-half seasons as head coach of the Denver Nuggets. Bzdelik is 0-4 against Kansas.

Kansas junior Cole Aldrich Aldrich averaged a double-double (15.0 points, 13.5 rebounds) to help the Jayhawks win two rivalry games last week and was named the Phillips 66 Big 12 Player of the Week for the second time this season. The center posted 12 points and 16 rebounds in an 84-65 win over Missouri. He followed that performance with 18 points and 11 boards as KU recorded an 81-79 overtime victory at Kansas State. In two games, he shot 50 percent (9-of-18) and made 12-of-18 from the free throw line. Aldrich also had 10 blocks, including a season-high seven versus Mizzou. He has recorded double-doubles in each of his last three outings and has nine overall this season. Aldrich was also the league player of the week on Jan. 4.