What's with Texas and Hand Symbols?

Share All sharing options for: What's with Texas and Hand Symbols?

So, it's a long week between games.  Colorado is coming up and I'm in need of a little break today.  With that in mind, did anyone catch the Aggies hand signal on Monday?  After the game I started thinking that it seems nearly every single team in Texas has some sort of hand signal for their team.  Did a little research and it appears we can in fact blame it on the Aggies.

In 1930 a Texas A&M graduate named Pinky Downs shouted "What are we going to do to those Horned Frogs," prior to a game against TCU.   "Gig ‘em, Aggies!" he apparently yelled, using a term that comes from frog hunting. For added emphasis, he made a fist with his thumb extended straight up, thus was born the beginning of the hand signals.

From here the hand signals in the state of Texas spread like a wildfire or an infectious disease, neither of which is a desirable thing.   I guess you have to tip your hat to the Aggies for being original.  As for the rest...it's whatever I guess? 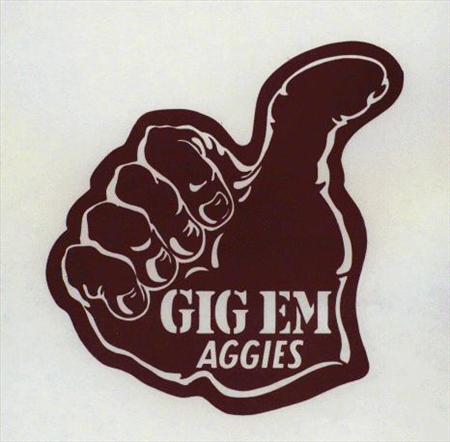 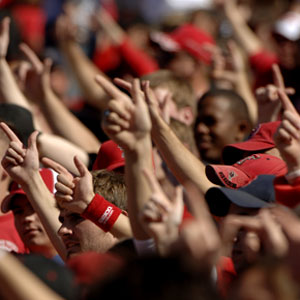 Originated in 1972 by a Tech graduate who was a currently attending law school.  The sign is made by extending the index finger outward while extending the thumb upward and tucking in the middle, little and fourth fingers to form a gun.

The idea is that the Red Raiders will shoot down their opponents or their coaches depending on the scenario(I know bad joke, we did the same thing). The "Guns Up" sign is the widely recognized greeting of one Red Raider to another. It is also the sign of victory displayed by the crowd at every athletic event. 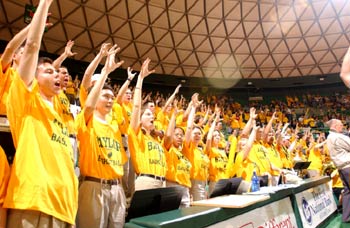 In 1960, Baylor's yell leaders introduced the "Bear Claw" hand signal, made by slightly curving all five fingers inward to form a claw.  This remarkable creative gesture is accompanied by yelling the words "Sic 'Em Bears".

Unfortunately throughout history the Baylor teams have elected to take on the hibernation trait of their namesake rather than the ferocious attacking image this hand gesture would suggest.  My next question, do they growl too? 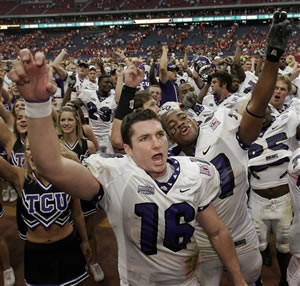 Apparently TCU cheerleaders began experimenting with hand signs in 1980 on the way to a cheerleading camp in Tennessee. To represent Horned Frogs, they first tried the UT sign with the outer fingers bent at the knuckles. No good: it could be seen as an admission that TCU was only half as good as UT. So they switched to bent index and middle fingers.

Personally I think a giant game of leap frog in the stands would have been more appropriate and original.  Not to mention the great image I have of TCU fans across the state of Texas greeting each other with a friendly flying leap over eachother rather than the frog had sign. 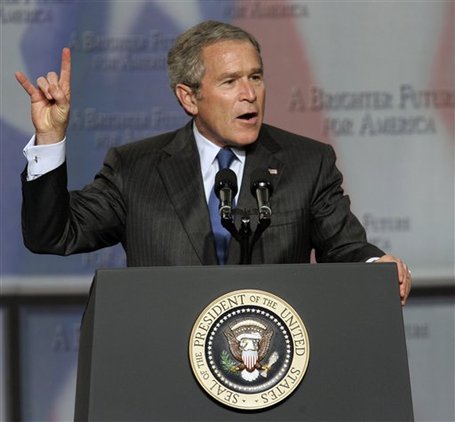 Harley Clark introduced the Hook 'em Horns sign in 1955. Clark was the head cheerleader at the university, a position that was elected by the student body.   Clark got the idea for the hand-sign from his colleague Henry Pitts, who had been casting shadows on the wall at the Texas Union.

In addition, the "gig 'em" thumbs up hand signal created by archrival Texas A&M University twenty five years earlier was growing in popularity across the state and a similar hand signal was desired by the University of Texas.  Hate to say it Longhorns, you copied your rival. 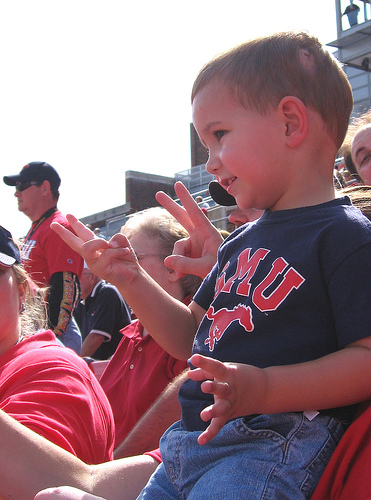 In the 1950s, the football team held two fingers up in the air as a sign of unity. The symbol was meant to represent a 'V' for victory. By the mid-1970s, the hand symbol became more curved to represent mustang ears "which are kind of floppy."  Hence the Pony Ears.

During the 80's it is said that the fans used the symbol to represent the number of decades it would take to rebuild the program after the death penalty. 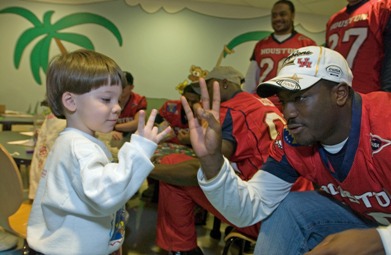 The first time UH played UT in football was in 1953, and since this was their first meeting, members of Alpha Phi Omega, the service fraternity in charge of taking care of Shasta I(Live Cougar, not that kind of Cougar KUGrad), the university's mascot, brought her to the game. During the trip, Shasta's front paw was caught in the cage door and one toe was cut off.

At the game, members of the opposing team discovered what had happened and began taunting UH players by holding up their hands with the ring finger bent. UT went on to win this game 28-7, and UH students began using the sign as notice that they would remember the taunts.  Geesh, seriously reaching now aren't we.

Now there are so many things wrong with this.  A live cougar, a frat coordinating the animal, it's name is SHASTA, and they apparently amputated it's toe with the cage door?  Good lord Houston, I hope my research is flawed on this one. 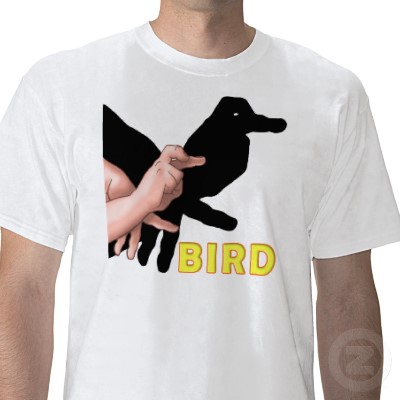 So there you have it, the summary of the hand signals beginning with Monday's opponent, the A&M Aggies.  I suppose if we were to come up with a Jayhawk hand signal it might be called the beak em and look like an unoriginal shadow puppet.  Or perhaps we could make some obscure talon like creation with our hands as well.

Of course what would be most remarkable is if we just went ahead and created the entire bird with a combination of both hands?

On second thought, I think I'll just stick with the Rock Chalk Chant and leave my hands free to hold a beer as needed.