Getting Back To I-70 Basketball: How Will Kansas, Missouri And Kansas State Fare In Big 12 Play

Share All sharing options for: Getting Back To I-70 Basketball: How Will Kansas, Missouri And Kansas State Fare In Big 12 Play 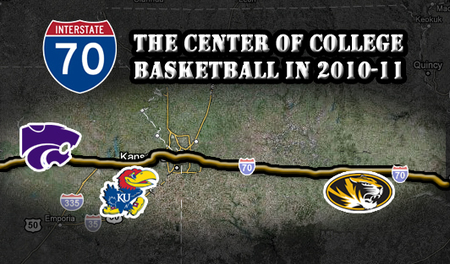 About a month ago we started a roundtable series between Rock Chalk Talk, Rock M Nation and Bring on the Cats discussing the three teams sitting on or near I-70 that are all major players in the college basketball landscape this year.

To date we've seen a week where all three teams were sitting in the top 10 and at this point all three teams have played their first major opponents of the year.  In short we know a little more about the teams, we've had a chance to see what might develop.

With that in mind, it's time to dive into the next stage of our roundtable discussion and answer questions regarding Kansas, Missouri and Kansas State when it comes to Big 12 play.  If you're interested in a recap of the last roundtable check Rock M Nation here.  Bring on the Cats will be running the 3rd and final piece sometime in the near future where we talk sustainability.

In regards to Big 12 play there are two questions that come to mind:

1. This is our final year before a true round-robin scheduling format kicks off.  With that in mind, how do you see things playing out for the three teams in Big 12 play?  Are they at a disadvantage over a Texas or Baylor who only have to play each team once?

2. What makes you nervous about your teams opponents in this I-70 trio and if you had to predict a Big 12 conference winner other than your own team who is it?

TB, Bring on the Cats:

1.  With unbalanced schedules, there's always that possibility.  In the past, some of the South teams have tied with KU in years when the South was notably superior to the North, and the team that tied with them beat the Jayhawks head-to-head.  In those situations, both teams are considered the champion, so I don't think there is a lot of room to complain.  And the bottom line this year is that, if you're the better team, you're going to come out of the wash.

All of the South teams have to play the North teams once, which means three games against what should be the best three teams in the league.  The I-70 teams play two road games and two home games against each other.  If you're the best team in the league, then you need to hold serve at home, even against the other top teams.  So my thinking is that whomever wins their home games against the others, even if they lose the road games, and doesn't drop one against "the rest" will probably come out on top.

2.  KU is as well coached as any team in the nation.  When they get their offense rolling, it's a thing of beauty if you're just a fan of the game.  Obviously, if you're on the other side of it, it tends to be more of a nightmare, but that's neither here nor there.  It's impressive how they get in their sets, everybody knows before they catch the ball what they're going to do with it (cutter? screen? drive? shoot?), and they tie defenses in knots because if you take away one thing, someone else is going to beat you.

With Mizzou, it's really nothing other than their style of play.  OK, it's also the fact that they now have some very talented players in that style of play.  But when the Tigers are on their home court, and they start to get you a little rattled, and the crowd gets louder, and the lights get brighter, and the temperature inside the arena gets a little hotter, you know nothing good will come of it.  To paraphrase what Owen said in the last post we did, when you beat Missouri, you know you've earned a tough win, even more so than you have most other wins.

1. Two axioms come to mind when looking at the "unbalanced" schedule because of the North/South split. The first  is "shut up and play." That's what fans of North teams told the South when whining about the scheduled commenced, and even though the roles are reversed, the concept stands. Plus, I'm not convinced the argument hold as much water in college basketball, in which a loss is nowhere near as crippling.

The second axiom is Mike Anderson's postseason motto: "Survive and advance." However, I think with the I-70 Trio, it could be slightly modified to "Survive then advance." Any of the three teams able to survive its four games with the other two schools is going to be battle tested in a way that perhaps no team in the country outside of the Big East will be come time for postseason play. Yes, playing in the Big 12 Conference -- particularly in the North this season -- will be brutal, but in a sport as egalitarian as college basketball, there's payoff in that brutality.

2. What makes me nervous is the same thing that makes me excited: These are three incredibly solid basketball teams who are capable of beating any team in the country on a given night. You can call it nerves if you want, but if these teams live up to even half of their expectations, they will make for incredible theater. Missouri hasn't played a tougher, more physical team in the last few seasons than Kansas State, and the reasons for respecting Kansas' stockpile of talent should go without saying. Kansas State is the media darling at the moment, oddly enough, but I don't bet against a streak. The title runs through Lawrence until someone proves otherwise.

1.  To answer the question of whether or not the three teams in the discussion are at a disadvantage, absolutely they are.  But that doesn't change the fact that everyone controls there own destiny.  Now if you're going on schedule Texas probably has the advantage.  They play just one road game against the big three in the North and obviously a home and home with Baylor.  Problem is, Texas is probably the team that impresses you the least out of the five so called contenders so it's hard to say if schedule is even relevant.  Plus if you add in the fact that A&M has looked decent thus far, things might just balance out.

If I had to place a bet, my money would be on one of the three in the North regardless of the scheduling.  I think Kansas or Kansas State are probably built better over a 16 game conference schedule, but Mizzou is tough and if I had to pick a team for the Big 12 tourney right now, it might be them.

2.  What makes me nervous about Mizzou is the addition of Ricardo Ratliffe.  The Tigers find a way to get you playing the way they want during stretches of a game almost without fail.  The biggest problem for them a year ago was offense. It's not completely fixed, but Ratliffe does provide a presence inside and that will pay dividends.  I specifically remember the game in Lawrence last year where Cole Aldrich cleaned up and I think to this year where the Jayhawks don't have that dominance on the boards and Missouri now has a piece in place to counteract.

From Kansas State's perspective, they are a talented team.  They're also extremely physical and if there's one thing that can hurt Kansas it's bigs in foul trouble.  When Marcus Morris or Markieff Morris have to head to the bench, the offense has looked lost in stretches.  So much of the Kansas offense goes through the interior that it's fairly critical that those two are on the floor.  With the Wildcats style of play it's very likely that they're sitting more than playing if they get baited into a physical contest.  That's a problem that Kansas might not be able to overcome.

If I'm picking a conference winner from the three, it's Kansas State.  I like both teams a lot, but Frank Martin has a lot of pieces in place and they can take there style of play to you and wear you down over the long haul.  At this point there offense seems to be a little more versatile and I guess all the coaches can't be wrong, can they?