Gearing Up for Memphis and Kansas in the Jimmy V Classic

Share All sharing options for: Gearing Up for Memphis and Kansas in the Jimmy V Classic

Coming off the tight UCLA game, Kansas gets another test on Tuesday night at Madison Square Garden against Memphis.  This will be the 3rd time in the last four years these two programs match up, with Kansas winning a close one last year 57-55.  And it's not like anyone will forget the meeting before that.  Memphis enters the game with a 7-0 record and ranked #14 by the AP.  Coach Josh Pastner is in his second year at the school after taking over for Calipari last year.  The Tigers finished 2009 with a record of 24-10 but had a very highly touted recruiting class coming into this year.

The Tigers have beaten a couple of BCS programs this year in Miami and Louisiana State while also beating five lower level teams.  They're averaging 85 points a game and giving up almost 66 so far this season.  As mentioned earlier, the AP has them ranked #14 but KenPom isn't as impressed, ranking them at 29.  They've had leads and struggled to put their opponent away in their last two games (sound familiar).  Either way, this is the most talented team Kansas has faced this year. 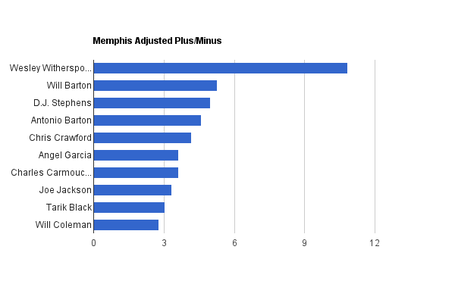 Team stats and player thoughts after the jump.

Memphis shoots the ball well on their 2 point attempts (55.4%) and not as well on their 3 pointers so far (33.3%).  The offensive rebound percentage is good but not out of this world.  The number that should scare Kansas fans would be the free throw rate.  Kansas has done a good job of limiting free throws but the bigs have found themselves in foul trouble, so the potential for that number to go up is there.  Memphis is also very young and that could lead to some turnovers to give the Jayhawks some easy baskets.

Memphis hasn't been very effective on the defensive glass, an area that should give the Jayhawks a big advantage.  If Markieff Morris can stay on the court, he could have a monster night.  They're also allowing a high number of free throws on the year, hopefully the guys can shoot better at the line if the chance comes up.

In the end, this is a game that Kansas should win.  The bigs have an opportunity to come out and establish themselves as the focus on the offensive end.  Get better post position and be willing to kick the ball out if a double team comes.  If it's one on one, take the ball to the rack.  Memphis does have athletic guards, so Taylor, Reed, and Morningstar will have their work cut out for them.  I wouldn't be surprised if Elijah Johnson or Travis Releford have an impact in this one.  They're athletic enough and should be properly motivated after a lot of watching against UCLA.  As for the bigs, just keep working.