With the Jayhawks having a couple more days off until facing UT-Arlington, I thought it might be a good time to check in on the Morri and see how the season is going for the big men.  The last few games have got me thinking about which of the two is actually more valuable to the Jayhawks this season.  Marcus Morris is generally regarded as the more polished of the two, named to the preseason All-Big 12 team, named on the Naismith watch list, and is a borderline lottery pick for the 2011 NBA Draft.  Markieff Morris didn't get even an "Honorable Mention" on the preseason All-Big 12 team and isn't projected to be taken in the 2011 draft, though he is ranked 22nd among NCAA juniors according to Draft Express.

Unfortunately for Markieff, this leads to him often being mentioned in the second breath when being compared to his brother.  Before going further, the differences between the two should be pointed out.  Marcus seems to be a little more athletic and more comfortable playing away from the basket.  He's a better shooter from the field and handles the ball with a little more confidence than Markieff.  Markieff does a better job of grabbing rebounds and playing defense on the interior.  As similar as they seem off the court, their games on the court are quite different.

A game by game comparison and a few quick thoughts below the jump.

The Cal game is what planted the seed in my head about looking at these two and actually starting to question whether Markieff might be getting very close to Marcus on the court.  In my memory, the team really rallied once Marcus was off the court.  Of course, my memory wasn't very accurate as the Jayhawks had a 12 point lead at the time he was ejected and within two minutes it was a 4 point lead.  Anyway, everything settled down and the team looked smooth and pretty damn good in the last 10 minutes of the game.  No Marcus?  Team looks great! (that's a joke)

Markieff has been held back by himself throughout his career, averaging over 6 fouls per 40 minutes.  But in the last four games, Kieff has avoided the foul trouble that cut into his minutes in the early part of the season.  He has played 24, 28, 30, and 31 minutes in those games.  In the other games this season, he didn't play 20 minutes in four of them due to foul trouble.  Marcus has now played less than 20 minutes in two of the last three games.  Against Colorado State, he rolled his ankle and missed a big chunk of the first half but also ended the game with 4 fouls.  Against Cal, it was only 12 minutes on the court.

To compare the two over the course of the season, I found their game scores from each game and plotted them below.  The simple plus/minus that I use here already has Markieff a little bit higher rated than Marcus, but that shows a slight bias towards rebounders over shooters.  We already know Markieff rebounds better than his brother. 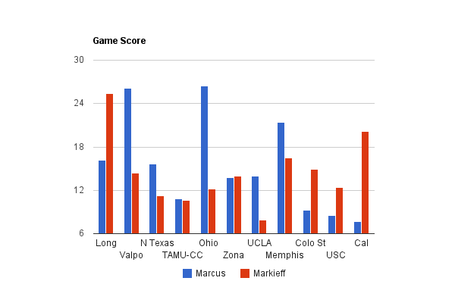 In the end, a side by side comparison of these two is really comparing apples and oranges.  They are both very valuable to the Jayhawks and they both bring different attributes to the court.  However, with Josh Selby in the mix now- I might lean towards Markieff and the rebounding going forward.

*Below are the per minute numbers for the Morri.  I'm only including it because they shocked me at how similar they are between the two.  Gotta be due to opponent, right? 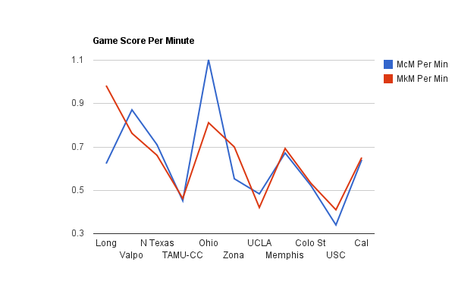