Sizing Up the Bears

Share All sharing options for: Sizing Up the Bears

The Jayhawks wrap up their Pac10 tour this week against the Golden Bears of California.  The Bears are picked to be a middle of the pack team in their conference, behind three teams Kansas has already beat and the two Washington schools.  That's not to say this game is going to be a cakewalk.  All three games against the teams from out west this year have been far from smooth and the Jayhawks benefited from having two of those at home.  This game comes at a time when Kansas seems to be struggling a bit and it is their first true road game of the season. 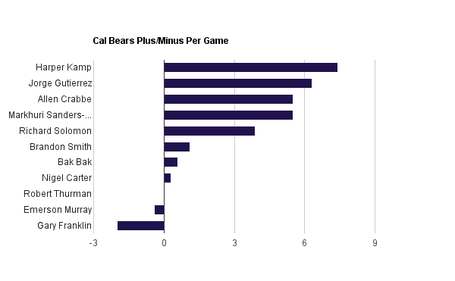 As mentioned earlier, they're average on the offensive side of the court.  Their efficiency is ranked 140th in the nation.  Their offense is very reliant on making shots, in games where they shot the ball well they have averaged over a point per possession.  In other games, they are well below a point per possession.  That's probably tied to their low offensive rebound percentage, as they're not getting a lot of second chances.  They don't get a lot of their points from behind the 3 pt line (23.1%) and get 24% from the free throw line.  The Bears are also very balanced with no player using more than 24% of the possessions while he is on the floor.  Harper Kamp and Markhuri Sanders-Frison are two guys that scare me going off of recent history.  They're 6'8'' and 6'7'' and pretty efficient inside.  The same type of guys that have caused problems through the early part of the season.

Cal's going to win their games this year with their defense.  They do a great job of keeping their opponents off the offensive glass and forcing tough shots.  They've got a low block percentage and combined with the high defensive rebounding numbers shows they play it safe on the defensive end, forcing their opponents to shoot over the top of them.  That's probably not a good thing for Kansas, as we've seen a tendency to settle for 8-10 foot fadeaways with iffy results.

In the end, this game has me worried.  Combining some of the performances we've seen in the last couple of weeks and the first true road game of the year, just leaves me with a bad feeling.  Of course, that's when the Jayhawks come out and win by 15 points while never looking stressed.  So I'll leave the prediction up to Ken Pomeroy, the probability of the Jayhawks winning is at 89% with a predicted score of 75-62.