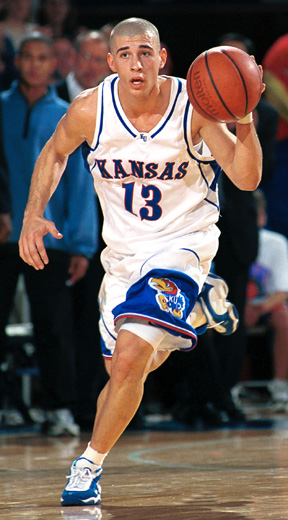 I am sure people are (understandably) at best a little bemused about my Jeff Boschee love and at worst totally sick of it. Still, today is his birthday so you're going to have to just live with it, because without Jeff Boschee I wouldn't be going to school at KU and I most definitely wouldn't be writing at RCT.

Boschee grew up in the little town of Valley City, North Dakota (population ~7,000), about 2 hours from where I grew up. His brother Mike attended (and played basketball at) the University of North Dakota, like I did. His high school basketball career is legendary: he was two time state player of the year, Mr. Basketball in 1998, the state's all time leading scorer, and our only McDonalds All-American.

I don't think I became such a huge Boschee fan because he went to Kansas. Truth be told I think if he had gone to Missouri I would be trolling RCT rather than writing for it. Rather I latched onto Boschee because he was a North Dakotan excelling in a field we don't usually excel in. Obviously the climate being what it is, we are much more of a hockey state.

Then again perhaps it is just because Boschee is from North Dakota. I think that for better or worse I can name a lot of famous North Dakotans who have done cool/not so cool things. For example: Phil Jackson = North Dakotan. That one is fairly well known. But the secret service agent who jumped on JFK to protect him after he had been shot? North Dakotan. Former Iowa State quarterback Waye Terry? North Dakotan. Forgive me if I'm wrong but I don't necessarily get the feeling that there is the same type of connection with Burlington native Tyrel Reed or heck Brady Morningstar, who is from right here in Lawrence. I know that there are more people from Kansas (and hell pretty much every other state) who have become famous than from North Dakota, but I also know that you'll find it hard to find a group of people who are more proud to be from where they're from.

But enough about me and more about the man of the hour:

I don't remember a lot from Boschee's McDonalds All-American game. The main memory I have to be honest is that that was the year Johnathan Bender set the scoring record. I don't remember much about his Freshman season either. I remember recording his first career game on tape for posterity (remember those days?) and hearing the incredulity in the play by play guy's voice (I am certain it was Dan Shulman but I am equally as certain that that is only how my memory remembers it). I also remember he was Big 12 Freshman of the year and Big 12 Tournament MVP. He was also part of a team that lost two out of three home games, which is pretty unthinkable in the current era of KU basketball. Truth be told, the first two teams he was on were pretty bad. Both teams got knocked out in the 2nd round, and they were a 6 and 8 seed respectively. I do remember how he and Kirk Hinrick guarded Duke's Jay Williams and held him to 2-15 shooting (ok, I had to look the exact numbers up, but I knew it was brutal) in the 2nd round loss. 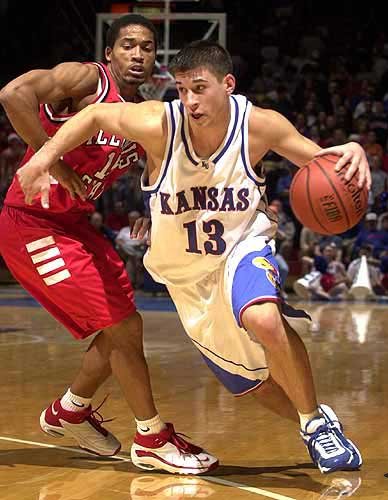 At the time, his Junior year wasn't terribly memorable. They played UND in Lawrence, which was pretty cool, and there was a home loss to Iowa State, which was not cool, but in all it was a pretty nondescript season. That all changed two years later when Roy Williams left and Coach Self was hired. KU's season was ended that year by Coach Self's Illinois team, and when I read Boschee's book Long Shot I got the sense that Illinois's physical play really upset him and although it was never explicitly said I think he had a negative feeling about Coach Self. So when he was hired, I will admit my first thought was wondering what Boschee thought of it.

His Senior year, as I've already covered, was one of the best statistical seasons in recent Kansas history. It was highlighted (for him) by a trip to the Final Four. But for me the highlight was the only KU game I had seen in person until this year. KU came up to Grand Forks to take on UND and my family and I drove through a semi snowstorm the 4 hours to Grand Forks to see the game. Our seats were fairly high up there, but I remember walking around courtside before the game and seeing Boschee (of course), Drew Gooden, Nick Collison, Kirk Hinrich, and Jeff Carey, whom I was really excited to see for some reason. Boschee played well and had a game high, and I remember him getting his own little highlight on Sportscenter, which was cool.

Alas all good things must come to an end, and Boschee's career did so in a 97-88 loss to Maryland (side note: 85 possession game. Holy balls) in which Boschee had 17 points. But I won't remember Jeff Boschee's career for the wins and the losses. I won't even remember it for the fact that when his career ended he had made more 3 pointers than anyone in Big 12 history. Instead I'll remember how the kid with the shaved head from tiny Valley City ended up being a (fully haired, thank god) four year starter at one of the best basketball schools in America and the captain of a Final Four team. I'll remember how he had to work his tail off to just get noticed by any college coach whatsoever, much less get a D1 scholarship. I'll remember how he indirectly influenced me to come to Kansas.

Boschee went on to play pro ball in the USBL, the ABA and over in Europe. He coached at the Barstow School for three years, going 20-5, 22-4 and 22-5. He currently is an assistant at D2 Missouri Southern State University, who is currently undefeated at 9-0 (5-0 in conference).

Honestly it's impossible to put what Boschee's career meant into words. His statistics were nice and watching him play was one of the best experiences ever, but more than that I will remember how his coming to Kansas made me a KU fan, and gave me wonderful experiences beyond his career (like some game vs. Memphis in 2008). Without Jeff Boschee I am not a KU fan, so thank you Jeff and Happy Birthday.

*I should also note that it certainly cannot be a coincidence that the lunar eclipse took place on his birthday, and the world is supposed to end on his birthday in 2012. Just saying.